You are here: HomenextExplore our archivenextTopicsnextThe Enemy Within: the Spanish Flu in Ireland, 1918-19nextMary Hayes 1901 - 1919 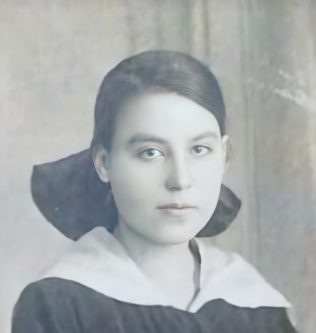 My great-aunt Mary Hayes from Limerick, who died 101 years ago in the second wave of the Spanish Flu aged just 17 and only a few weeks after this photograph was taken. She was dearly missed by her family and my mother was named after her.

Mary was born at what was known as the ‘Bedford Row Lying-In hospital’ on Thursday 18th July 1901. The family then resided at 3 Flag Lane, Limerick. In the 1911 Census the family are shown living at 15 in Pigott’s Lane  (See attached), where Mary is listed as a scholar aged 9.

She died at No. 43 Thomas Street, in Limerick on Saturday 22nd March 1919 aged 17.                  Her older bother, Mortimer, was my grandfather. Included below is some correspondence between Mary’s mother and Mortimer’s regiment (he fought in the Great War) from this address in 1914.