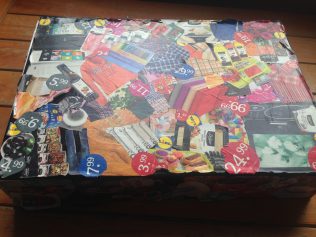 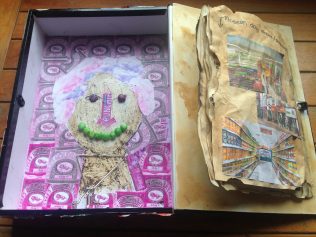 zoom
Inside my History Box 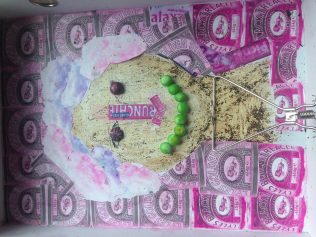 zoom
A Portait of my Granny, made out of items you could buy in the shops back then 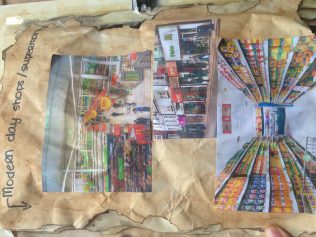 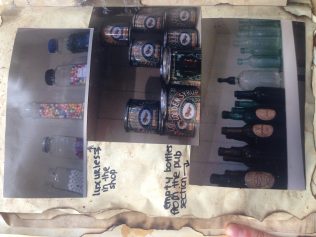 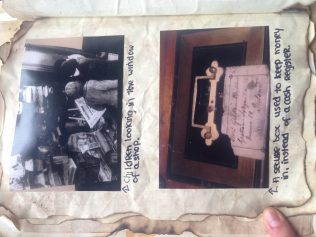 zoom
Children Outside a Shop, a Cash Box 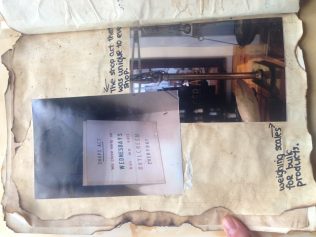 Interview of my granny, Brigid Conway.

“People went to the to buy the essential things they couldn’t produce for themselves especially if you lived further out,” my grandmother said. She also said the shopkeeper was always a woman and they were a very important person in the community. They were the source of “mass-produced” items and were sort of a link between the outside world with newspapers and magazines being sold in her shop. Sometimes she was a link by knowing what was going on in different regions because of her many contacts. “She would know everyone’s name and became friends with us all.”

“There was a nice range of products available in most shops,” my grandmother told me. Although it was nothing to the standard of nowadays, you still got the essentials.  Some staples were corn flour, tea, sugar and salt. These were purchased in bulk and the shopkeeper would have to measure them out for the customer on her weighing scales. However, larger amounts would be scooped into standard sized bags or sacks. As part of the growth in mass-production, some items were prepackaged. Bright labels and boxes made the new food items made elsewhere more desirable.

You could also buy food “for man, animal or bird”. Manufactured goods were also part of most shops trade making people lives more comfortable. These items were oil lamps, bicycle tubes, bicycles, bandage boxes, oil bottles, cutlery, shovels, needles and thread. Some other luxuries consisted of sweets, bought in ones or twos by little children, or in large quantities also. Adults could also buy cigarettes, which could be individually purchased or bought in packets of different sizes and amounts.

When paying for your purchase, “the cash wash placed and stored in a secure box”, or in more prosperous shops, a cash register. Those who could not pay at the time of the purchase had the amount written on a “slate” for future payment. However the shopkeeper wouldn’t let just anyone do this as she had to have trust in you that you would or could pay it back. People with high positions in the community or people with close relationships to her mainly got this luxury.

“Many shops were also pubs,” my grandmother said. Sometimes a whole section of the building was a pub, and in other cases there was just a few chairs and a table in a corner. Either way the shops trade was profitable in selling whiskey, stout and other popular soft drinks at the time.