You are here: HomenextExplore our archivenextTopicsnextReflections on Irish HeritagenextBallinrobe Musical Society: The Pirates of Penzance 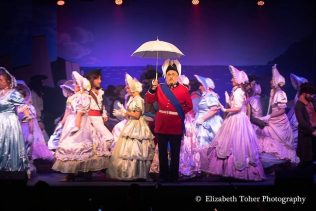 zoom
The Pirates of Penzance
Elizabeth Toher (all permissions granted_ 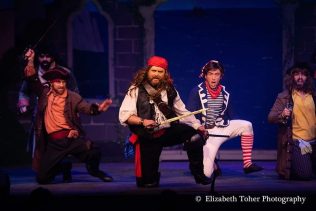 zoom
The Pirates of Penzance
Elizabeth Toher (all permissions granted)

As the overture began, I found myself awash with emotion. Gilbert and Sullivan’s ‘The Pirates of Penzance’ was a much-loved musical that I spent many happy hours watching in my childhood from the two eighties movies to the West End. I had seen superb versions and less than brilliant versions and had no idea what to expect from the local musical society. My expectations were met, and exceeded, with a great swash-buckling fury. The entire performance from start to finish had pace, humour and perfected performances. It was the best that I have seen!

The orchestra, conducted marvellously by musical director Finola Higgins, delivered a non-stop feast for the ears and worked perfectly with the on-stage vocals. As the first act opened the ‘HMS Brexiteer’ heaved on the stage giving a contemporary feel to a 19th century tale. Pirates drove the ship on in a variety of costumes, led by the exuberant and raucous Pirate King (Niall Conway). The King donned an outfit similar to that of Jack Sparrow (The Pirates of the Caribbean) and delivered the infamous ‘Oh Better Far to Live and Die,’ with much zeal and lively choreography. Eoin Mullins presented a perfectly naïve Frederic, looking innocently for love and viciously spurning his long-suffering nurse Ruth (Siobhan Campbell) for General Stanley’s bevy of beautiful daughters. Ruth’s downtrodden nurse amazingly transformed into a swaggering pirate queen for the second act in an unforgettable metamorphosis presented through fantastic acting and a superbly dashing costume.

A joy to watch

Once the pirates invaded the cove the stunningly costumed ladies made little effort to run from their would-be captors resulting in lifts, swings and the amusement that latches onto this tongue in cheek comedy. Soaring vocals were delivered expertly by Mabel (Eve Garavan) and Edith (Catherine Conway) which contrasted with Richard Crumlish’ rampant delivery of ‘I am the Very Model of a Modern Major General,’ one of the highlights of the musical.
I say one of the highlights because there were many highlights to be found in this treasure. The characters of Samuel (John Byrne) and the Sergeant of Police (Mike Ansbro) made their characters all their own with superb vocals and acting and were a joy to watch. Overall the performers thoroughly enjoyed creating this gem and their enthusiasm shone through. Another highlight, that cannot be overlooked, was the mind-blowing performance of ‘With Cat Like Tread, Upon Our Prey We Steal.’ Orchestra, costume, choreography and vocals joined to blast out this superb number with the pirates combining the song’s glorious finale with Kevin Kline’s much coveted leg work, and a jolly job they did!

The entire musical society pulled together to create an unforgettable treasure and I hope to watch many more musicals performed by this magnificent society, a real gem of the community.