zoom
Click here to submit information to the survey 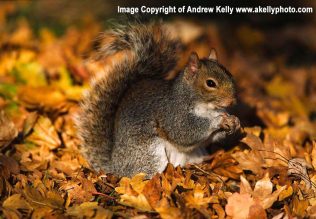 The NUI Galway Mammal Ecology Group are involved in a project examining the relationships between three woodland mammal species in Ireland; the native red squirrel, pine marten and the introduced grey squirrel. This project aims to increase our understanding of the ecology of all three animals, and help in the conservation of the two native species.

Since its introduction to Ireland roughly 100 years ago, the grey squirrel has spread throughout the eastern half of Ireland. As it has spread it has had a negative impact on the native red squirrel, which has been seen to disappear from many areas of the country, particularly those in which the grey squirrel has longest been established (O’Teangana et al., 2000). This demise of the red squirrel has been attributed to competition between the two species, and by a potential disease (Squirrel Pox Virus) carried by the greys but lethal only to the red (Sainsbury et al., 2000).

In the most recent distribution survey carried out on the two species (Carey et al., 2007) it was noted that in certain midland counties (Laois/Offaly and Cavan/Monaghan) the grey squirrels had not replaced the red in the same manner as in other areas, and even that the red squirrel had extended its range. This coincided with a resurgence of the pine marten (Martes martes) in the two areas suggesting that the pine marten may be disrupting the usual pattern of displacement of red squirrels by greys. Alternatively it may just reflect habitat preferences of the species concerned.

Could saving the pine marten help to conserve our native red squirrel?

Theoretically the pine martens may find the greys easier to catch given their greater activity time spent on the ground, and larger body mass than the reds. The authors of the Irish Squirrel Survey, 2007 include a recommendation that the interactions between the three species should be the subject of future research. This project aims to carry out that study, determining whether the pine marten is directly involved in slowing or preventing the replacement of red squirrels by grey squirrels.

It is important for the future of conservation work that the role of the pine marten in controlling grey squirrel spread, if any, is determined. If an influence is detected it would allow for the promotion of the conservation of pine martens, not only for the protection of the red squirrel, but also as a potential natural control of the invasive grey squirrel. If no influence is detected it will allow the theory to be discounted and red squirrel conservation efforts to be concentrated on other areas. Other information gained on the ecology of the three species will also feed into protecting the two native species, and controlling the invasive species to further promote biodiversity in Ireland.

How You Can Help

If you have observed any of these animals in recent years, whether it be direct observation in woodlands or even dead animals at roadsides, we would like to hear from you! Any information on the presence and/or absence of any or all of these species could be of help to us, particularly in this the initial phase of the project. To report a sighting, please fill in our online survey form or alternatively you can call us on 0871498859 or 091492903.