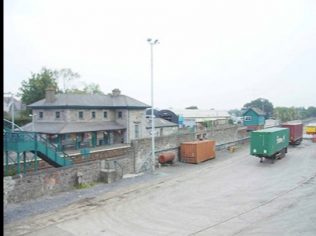 Longford Town Railway Station was originally built by the Midland and Great Western Railway Company in 1855 to serve the Mullingar to Sligo line. It was probably built to designs by George Wilkinson (1814 -1890), a noted architect of his day, who also completed the designs for a number of other railway stations for The Midland and Great Western Railway Company (on the Mullingar to Longford and the Inny Junction to Cavan lines) at this time. This building forms the centrepiece of a group of structures associated with Longford Town Railway Station, along with the footbridge, the signal box, the iron crane and the goods shed.