Traditional May Day Customs in Ireland

May Day, the first day of the month of May, is one of the quarterly days in the traditional Irish calendar.  Each of these quarterly days indicates the start of a new season. Spring is marked by 1 February (St Brigid’s Day), autumn by 1 August (Lúnasa) and winter by 1 November (Samhain). There were also folk customs associated with the eves of these festivals marking the seasonal transition.

As in much of northern Europe, May Day in Ireland, was a celebration and welcome of the summer. Here, it is rooted in the pre-Christian festival of Bealtaine. Bealtaine embraces the summer, bidding farewell to the dark winter half of the year. Flowers, dancing, and bonfires featured strongly in the festivities. People also sought protection for themselves, their homes and livestock against supernatural forces.

A busy time on the land 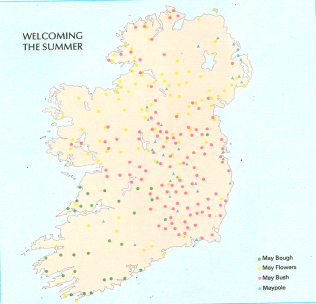 May Day was regarded as the symbolic start of a busy season of farm work. People worked in the fields focusing on the care of animals and their movement to different pastures. There was also an emphasis on fishing for example for salmon. It was a busy time for markets and marts in order to sell animals and at this time seasonal labourers were hired. The important job of cutting turf in the bogs also started in earnest around May Day.

Traditionally on the 1 May and the 1 November, tenant farmers paid their half-yearly rents to landlords – these were known as ‘Gale Days’. People also took stock of their food supply that had to sustain them until the crops could be harvested later in the year.

The May Bush was a decorated bush, which in rural areas was left outside the house. In towns, it was erected in a communal place. Sometimes it was carried about the area by groups of adults although later this custom was carried out by children. Geographically, the tradition was strongest in Leinster and the Midlands, stretching west to Galway and northwards to south Ulster and Donegal. The bush was often of hawthorn. The decoration usually consisted of ribbons, cloth streamers and perhaps tinsel. Sometimes the leftover coloured eggshells painted for Easter Sunday were used as decorations. 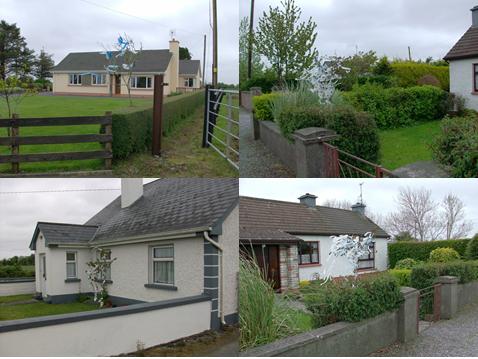 Decorated May Bushes on road between Cloghan and Ferbane, Co. Offaly in May 2009

On occasions, candles were attached to it.

‘Long Life, a pretty wife and a candle for the May Bush’ was a rhyme recounted by children in Dublin when looking for a contribution of candles, money or sweets for their May Day festivities. 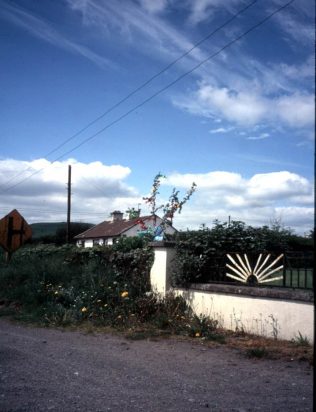 Sometimes communal bushes were burnt on May Day evening. The bush was associated with the luck of the house or the community and in cities it was watched carefully in case a rival group would attempt to steal it. The custom of erecting a May bush still survives as an individual household tradition, particularly in the Midlands.

The May Bough was a larger version of the May Bush and was most popular in Munster. Instead of a small bush, a larger part of a tree was used. This was either for outside homes or for use at some public area in the community. It was similarly decorated to the May Bush.

May Poles were popular in some large towns and possibly indicate a certain English influence. In this festive way communities welcomed in the summer. There were May poles in many towns, such as Kilkenny, Mountmellick, Kildare and Longford. There was also a strong tradition in the north east of Ireland, such as in Hollywood, Co. Down. Originally tall trees were used but later these were replaced by formal poles erected in the town centre. They were decorated with flowers and ribbons and like in England, where the tradition was more widespread, dancing and sport centred around the pole.

May Flowers were picked on the evening before May Day and this was often done by children who went garlanding for flowers. These were sometimes assembled together to make posies or crowns. Yellow flowers, such as primroses, buttercups and marigolds were especially popular, possibly as they reflected the sun and summer. Furze and ferns were also put around the outside of the home.

The flowers were placed on the doorsteps of houses and on windowsills. They were believed to offer luck to the house and offer protection from mystical forces – there was a strongly held belief that these were particularly active around the quarterly days. It was believed that the fairies could not enter the home as they could not pass such sweet smelling flowers.

They were often put on farm animals so as to protect them from being ‘overlooked’ by people with the evil eye, who might through envy, steal the productivity of the animals.

The tradition of spreading flowers at thresholds was most common in the northern half of Ireland, especially south Ulster. Throughout Ireland, there is a strong tradition of formally showing welcome, through the spreading of rushes. [1]

Children often carried baskets of flowers and strew them in front of their neighbours’ homes as a gesture of goodwill and good luck.

Sometimes May flowers were placed in the local well so as protect the water supply and the livelihood of those who used it. The stealing or skimming of water from the well or dew from the fields of a neighbour, by those with evil intentions, was believed to result in a lack of produce achieved by the household or the community. Water or fire was generally never asked for or taken from the home on May Eve or May Day so as to retain the luck of the house. Mayflower water taken from the well on May Day was said to offer protection and cures. This water and May morning dew was believed to be good for the complexion.

I wash my face in water that has never rained nor run and dry it in a towel that was never wove on spun. [A face washed in May dew and dried in the open air]

‘Never cast a clout until May is out’ is an expression warning of not shedding too many winter layers until the end of the month of May.

Herbs gathered before sunrise on May Day were believed to have particularly effective curative properties.

May Queens & May Poles

The Flowers were also used for crowning the May Queen. The tradition of selecting a Queen of May is found throughout Europe and may have associations with the ancient Roman Goddess, Flora. 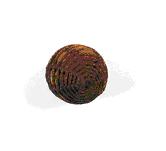 Like the May Poles, this tradition was more popular in large towns. It was often accompanied by a procession and sports and festivities. In some parts of Ulster, a King was chosen, along with the Queen. Sometimes, there was a bush carried in the procession, on which there were hurling balls hanging. May Day traditionally marked the start of summer hurling and in Kilkenny, women gifted men with new hurling balls on this day.

In parts of south Ulster, there was an effigy of a female May Queen carried on a pole in a procession. This was decorated with flowers. There are references to a similar floral decorated May Baby in parts of Monaghan.

The expression, idir dhá thine Bhealtaine means ‘between the two fires of May’, and is similar 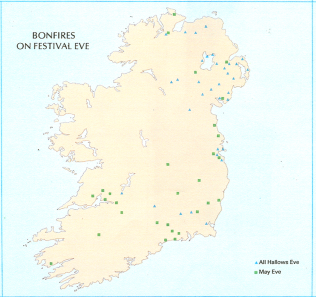 in meaning to the expression of being ‘between a rock and a hard place’. Driving cattle through the embers of May fires was undertaken to gain their good health for the coming year. Bonfires were a feature of May Eve throughout Europe but the tradition survived mainly in the east of Ireland and in parts of Munster. Although there were small local and family bonfires to ensure good luck, the tradition of larger communal fires survived especially in the cities, e.g. Limerick and Belfast. In the west, the bonfire night was most celebrated on St. John’s Eve and elsewhere Halloween was the night for fires.

Dancing was a feature of May bonfire celebrations. It also featured around the May Pole or where communal May Bushes were burnt. This was a time for celebrating the continuity of the community. The customary dance involved the men and women joining hands to form a large circle with a dancer weaving in and out of the circle under their arms and collecting other dancers to follow after them. This has been described as representing a winding serpent and as representing the movements of the sun. It is similar to the children’s game In and out go the dusty bluebells – these blue flowers were also traditionally picked in May.

May, the month of Mary 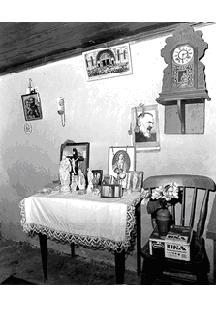 Since medieval times in Ireland, there has been a strong association with the devotion to the Blessed Virgin Mary during the month of May. Much of the traditions associated with May have been incorporated into the Marian processions found throughout the country.

Children and adults collected flowers for crowning Our Lady in town processions. They also used them to decorate grottoes, shrines and church altars. It was and still is very common to have a home altar either in the kitchen or outside in the farmyard. Sometimes the flowers picked for this altar were made into crosses. The maintenance of these altars and their replenishment with fresh flowers continued on from the 1 May, throughout the month. 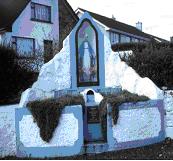 Bring flowers of the rarest
bring blossoms the fairest,
from garden and woodland and hillside and dale;
our full hearts are swelling,
our glad voices telling
the praise of the loveliest flower of the vale!

May Hymn to Our Lady 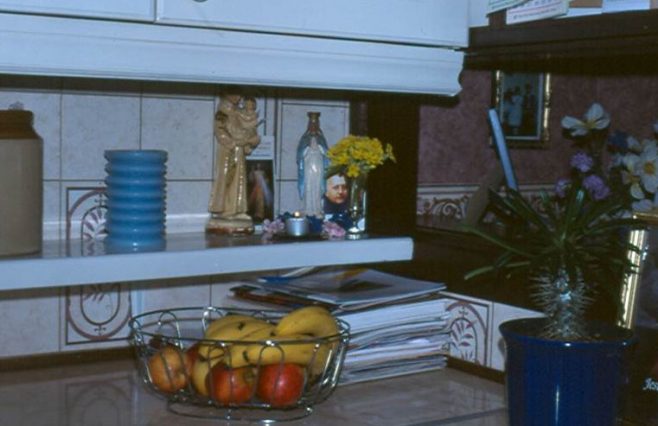 May Day was especially associated with butter stealing: the stealing of the butter profit of the home. The cows were safe-guarded through attaching flowers around their heads and sometimes red ribbons or bits of rowan were tied to their tails. This was believed to offer them protection from the malign glance of those with the evil eye.The churn was especially vulnerable at this time so often similar items or iron objects were placed underneath it.

All those who visited the house at this time were encouraged to take a dash of the churn. They usually accompanied this with a prayer such as ‘God Bless the Work’. Holy water was often sprinkled on the animals, the churn and all objects associated with dairying. Some of the early butter-prints in the National Museum’s Collection reflect this belief and are shaped like an eye. May butter was often kept and used in small quantities to add to the churn and dairy items for good luck and protection.

“People used make the ‘May Eve Churn’ and the butter of that churn was salted and put away for the coming year. Each night and morning before the milk is put in the pans, the woman got a small piece of butter of the ‘May Eve Churn’ and put it in the pan and then put in new milk. The ‘power’ of this butter prevents the milk and cream from being taken by ‘pishoges’ or any other supernatural power.” Ms. Hannah Daly (22), Annascaul, Co. Kerry, 1941.

May Eve and May Day was a time to divine the future. Women tried with snails on flour to foretell the man that they would marry.

“When gorse is out of blossom, kissing’s out of fashion”.

Furze which is also known as gorse is in flower from February to May.

This was also a time to study the weather and weather in the month of May would forecast what was expected to follow in the summer.

In summary, May Day in Ireland was a festival to welcome the summer and to protect the family and livelihood of the farm from supernatural forces. It was a festival celebrated with flowers, fires and dancing and had strong links to the same holiday celebrated throughout northern Europe.