Some May Day Customs from South Roscommon 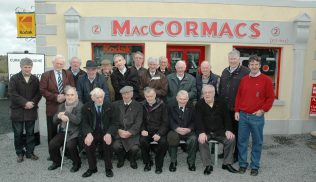 The Following May Day Customs were collected from the Dysart Rural Men’s Group in May 2012.

1. It was common to make a timber cross and decorate it with wild flowers on May Day. The cross would be placed in the garden for the neighbours to see and would be blessed with holy water. Prior to the cross being put in the garden family members would bless both themselves and the cross, afterwards a Hail Mary would be said.

Today this Custom is still done, primarily in the parish of Drum.

2. On May Day a mare that would be in foal would not be worked. It was not possible to ascertain why this was so however, perhaps harm would come to either mere or her unborn foal.

3. No farmer would work the clay (a team of horses) on May Day. Instead, people would tend to other chores like fixing fences or building walls.

4. On May Day a Hare would not be brought into a house without first splitting its ear. The reason for doing this was to ensure that a child would not be born into the home with a cleft Lip.

5. At Sunrise on May Day people used to run around Fields and then go down on their knees and bless themselves. The dew would also be rubbed into the face and it was believed if you did this you would not get a cold for a year.

6. Milk would not be given out on may day because it was associated with giving away your luck.

7. On May Day Women and Teenagers would always make a daisy chain which would be then worn for the whole Day.

9. Every home on May Day had an alter dedicated to our Lady. This alter was adorned with many different kinds of wild flowers. Flowers were also picked from gardens for this purpose. This custom is still done but not as common as in Days gone by.

10. To tie a Red Ribbon on a cow’s tail on May Day was a widely practised Custom in South Roscommon. It was believed that a cow without her Red Ribbon would have her milk taken by the Fairies. Needless to say, Cow’s with Red Ribbons tied to their Tails is not a sight one would see today.

There is one other Custom I am aware of for May Day  which is done in Roscommon Town. Wild Flowers (Bluebell and Primroses) are placed outside the doorsteps of Homes in the Henry Street and Circular road areas of Roscommon Town. The reason for doing this is to bring good fortune to all these homes and also to celebrate the 1st of May.

I am familiar with this Custom as I grew up in Henry Street. The Flowers used are picked the evening before hand in a local forest(Mote Park) and then blessed with Holy Water

Late on the last night of April the Flowers are placed outside the homes of the above areas in Roscommon Town. This custom is carried by my own Mother, Margaret Hoare. She has been doing this since 1960. Prior to this a grand Aunt, Delia Walshe R.I.P. who came to live in Roscommon in the 1940s from Galway City carried out this Custom. It does appear that this custom has it’s origins in Galway and today I am not aware of any other part of roscommon where this May Day Custom is Celebrated.