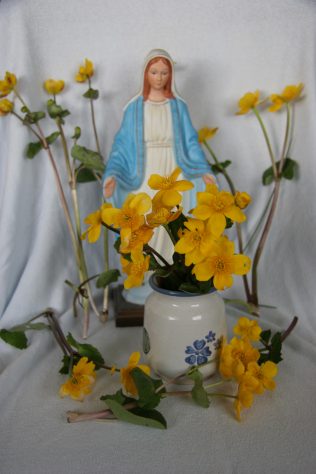 zoom
The May Altar decorated with mayflowers, here Marsh Marigold 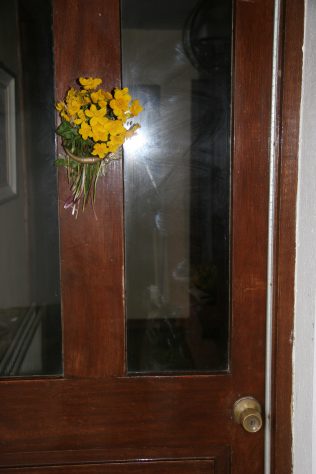 When we were growing up the nuns taught us that May was Mary’s month. To their smiling approval we made May altars ( yes, even the boys). We brought fresh flowers every few days and said fervent prayers to Mary. Somehow we just knew she appreciated it. It felt nice and special and gave us a warm feeling. The nuns beamed beatifically when, in answer to their questions, we vied with each other as to who had the best altar. It all made us feel close to the Blessed Virgin who lived in that mysterious, faraway place: Heaven.

Mary’s altar was a haven of peace

Even the little blue and white plaster statue had a pleasurable look about it and Mary smiled a never ending smile, all through the whole month — which is more than could be said for our parents who scowled and barked orders a lot more than they ever smiled. Do this, go there, feed the calves, put the hens up on the roost, put out the ashes; did ye do yer lessons?The sally rod was always close by so there was no point in putting up a fuss. Children had no rights then and parents thought it, not just their duty, but a virtue to use the ‘shtick’. ‘Spare the rod and spoil the child’ was dogma. The miseries were never-ending, so no wonder then that Mary’s altar was a haven of peace, tranquility and a promise of better things to come.

No one ever told us then that Mayday was the beginning of the old Celtic quarter festival of Bealtaine. Or that May was Baal or Bel’s month and the word Bealtaine derived from ‘Bels fire’, the fire of Belenos, Celtic God of the Sun. Maybe they didn’t know! It might have taken 1,500 years but by the 1900s any taint of paganism that existed when St. Patrick came here was well squeezed out of us. Or was it?

There were the fairies to take into account as well

If it was, then why did my mother and father gather mayflowers (Marsh Marigold) on May eve? And, if they did gather them, why didn’t they put them on Mary’s altar? They didn’t, they threw some up on the roof and more on the threshold. Strange behaviour but it was to bless the house they said, and to bring good luck for the coming year. Practical people then! Better to keep all sides with you. Tenuous it may have been, but the old Gods held their place.
Of course there was the fairies to take into account as well. They were part of the old creed too and particularly busy about their mischief at this time of year. People bought milk from neighbours then. There was always someone with a cow in milk. No point in going to the shop. They didn’t have any. There was no call for it! If a neighbour came in for milk on Mayday things were different to any other day — they’d be very lucky to get any. No offense meant, but one could be giving away their luck by allowing the milk out of the house. If they relented, a drop of salt was put in the milk to neutralise any harm. No ashes was put out on that day for fear of throwing away the luck.

‘People don’t do this sort of thing anymore..’

Neither was the cow byre cleaned out. The list was endless. And of course we still went to Mass on Sunday to cover the other side of things. You couldn’t be too careful.
A load of superstitious nonsense I hear you say? Well, I don’t know, certainly it never did us any harm. And like an old man said one time, ‘People don’t do this sort of thing so much anymore but that doesn’t say they’re any the better for it!’ He has a point, so I think of the old innocent people and the beliefs that sustained them when I, and many others in Co. Sligo, carry on the ancient tradition of welcoming natures rebirth by bedecking the house with Mayflowers and glorious whin on May Eve. I hope you will this year as well!