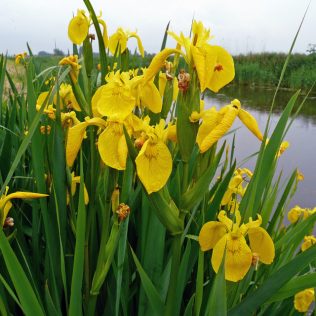 zoom
'flaggers' were the leaves from the Yellow flag iris
courtesy of Fashions-cloud.com

Sometime in the 1980s we opened the door on the 1st May and there were ‘flaggers’ on the door step, these are the leaves of the yellow iris plant that grows in wet places. There were no flowers only the leaves, my grandfather told us it was to keep the fairies away. We were only children and were amazed. He said someone on the street did it and as far as I was aware this happened every year.

I have told my children about this and if we could find flaggers where we live it would have been done this year in Co. Cork – maybe next year.

I heard in recent years that on May day eve, I think it was, people could swap lovers and that the May flower came to represent the ‘other’ woman, hence it was banned from the house (Eamonn Kelly, National Museum of Ireland pers comm.). If this was the belief in Limerick it wasn’t told to us.

When does this take place?

Where does this take place?