BARRY, William Whittaker (1867) A Walking Tour Round Ireland in 1865, by an Englishman. 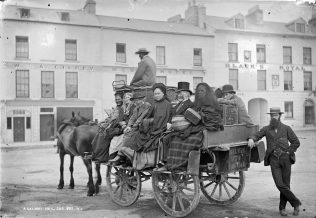 zoom
A Galway Mail Car, Eyre Square, c. 1880-1900. Black's Hotel may be seen in the right background of thei William Lawrence photograph.
Courtesy of the National Library of Ireland.

During the autumn of 1865, William Whittaker Barry spent 10 weeks, during which he visited 20 out of the 32 counties, and walked upwards of 1,000 miles. A self-professed “intelligent and well-informed Englishman”, Barry arrived in Galway on Wednesday 13 September 1865. The following day he toured the town, including the suburbs of the Claddagh and Salthill, and departed on Friday 15 on foot in the direction of Kinvarra. The book was such a great success, that the following year Barry published the journal of his walking tour of Normandy, France, which had undertaken in 1863.

William Whittaker Barry was born about 1827; he was the third son of the Rev. Henry Barry, rector of Draycott Cerne, Wiltshire, England. William was a member of the legal profession and wrote several treatises on the practice of law.

In 1875, Barry undertook a fateful tour through the Tyrol, then part of the Austro-Hungarian Empire. He departed Krimml on 30 September, alone and without a guide, as was his custom, heading for Kasern. Barry was last seen braving a snowstorm in the mountains of Tyrol.

I put up at Black’s in Eyre Square …

About two miles from Galway I came in sight of the town and the Queen’s College. The general view from here is good, but at another turn of the road a better prospect is obtained. You see the Bay with the vessels and boats looking black in the distance, and the whole town is before you. The sun was setting and the effect was fine. I walked slowly through the town to Eyre Square and beyond. An old woman bade me welcome, and asked a penny which I gave her. Then a boy in Eyre Square and again another, made similar requests and with the same result. The Railway Hotel is a large fine looking building but, I put up at Black’s in Eyre Square. Kilroy’s is gone and Black takes his place giving up his old establishment. I did not, however, find Black’s Hotel comfortable, though it seems to be the popular place of resort for the commercial gentlemen, who generally know what is good.

The waiters were uncivil, and at night the bed was unclean …

The waiters were uncivil, and at night the bed was unclean. I ordered some fresh herrings, but they proved to be corned, which made the already thirsty traveller still more thirsty. I may observe that corned beef, mutton, and fish are rather common at the inns in Ireland, as having frequently few guests the fresh provisions ordered are not all required for immediate use. The process consists, I believe, merely in slightly salting the meat or fish, not so much, for instance as in the case of the bloater. Indeed the waiters endeavour to persuade travellers that corned food is about the same as fresh. Other travellers seemed treated here in the same uncivil manner […]

During the night most persons in the house must have had reason to think of his existence with no pleasant feelings. A traveller for nearly an hour was ringing and knocking to obtain admittance, and making enough noise to awaken the seven sleepers. At length I heard door after door open, and when the whole household had been roused, the traveller obtained admission. I heard afterwards that on one occasion a traveller was stabbed by a waiter at this hotel, provoked probably by such an incident as that I have alluded to. Mr Black is, I am informed, a widower and probably the defects of this hotel are owing to the removal of woman’s gentle influence. […]

I now returned to Black’s Hotel. I had partly intended the day before to make a move towards the Railway Hotel, but my night’s experiences confirmed such intention. However, I had given out some things to be washed, so was bound there until 1 o’clock. So I remove to the Railway Hotel. I do not like, as a general rule, taking such a step for a single night, and believe in my previous travels not to have done so before; in the first place because of the trouble, perhaps, but also and I hope mainly, because the doing so without some grave reason throws discredit on the innkeeper, which, if it comes to his knowledge, he is likely to feel though the pecuniary loss may be trifling. The change from Black’s to the Railway was like one from barbarism to civilisation, and I found the latter hotel most clean, quiet, and comfortable, with a good dinner, and including herrings, no longer corned but fresh. On comparing, however, the bills of the two establishments I found Black’s the more moderate of the two. There were but few guests at the Railway. The proprietor would act more wisely if he made his tariff exactly the same as Black’s. A slight difference may not affect the choice of casual visitors, but I think it may influence the determination of commercial travellers who come round regularly.

Finding no escape from my persecutor …

Having taken up my new quarters at the Railway Hotel, I issued forth again in order to see more of the town. On emerging into the square, a boy begged of me a penny. I reasoned with him on the absurdity of his request, and that if I complied with it I should not be able to walk through the town. He replied no other boy would see. I said ‘There is one,’ pointing to a ragged little fellow. This silenced him for a while, though as he still continued following, I thought he must be meditating some new mode of attack. At length the boy said, ‘See, sir, that boy is now gone,’ and looked as if he had now removed the only objection to the transfer of a penny from my pocket to his own. Finding no escape from my persecutor, I bargained that he must earn his penny by showing me Lynch’s Monument, which I had been unable to discover in the morning .So we walked together to Lombard Street, near the Church of St Nicholas, where this monument is erected on a wall enclosing one side of the churchyard. (Barry, 1867, 164-170)

This book is out of copyright and can be accessed and downloaded in full via Google books here.

BARRY, William Whittaker (1867) A Walking Tour Round Ireland in 1865, by an Englishman. London: Richard Bentley.

BARRY, William Whittaker (1865) A Treatise on the Practice of Conveyancing. London: Butterworths, 1865.

BARRY, William Whittaker (1861) A Treatise on the Statutory Jurisdiction of the Court of Chancery; with an Appendix of Precendents. London: V. & R. Stevens & Sons.

New York Times, “A Missing Traveller. Lost Among the Mountain Hills of the Tyrol – The Uncertain fate of a Tourist”, 23 July 1873.