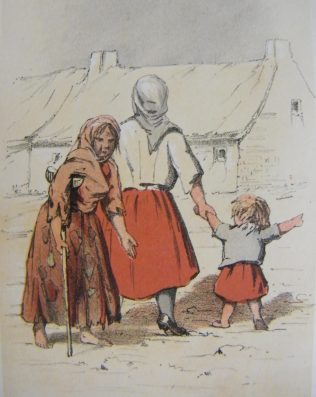 zoom
Lane in the Claddagh (Galway).
Henry Coulter (1862) The West of Ireland. 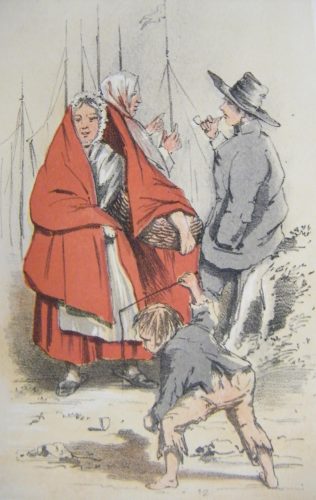 The journalist, Henry Coulter, was a native of Newry, Co. Down. He initially plied his trade working for the Freeman’s Journal, reporting on the many speeches of Daniel O’Connell and the debates of the the Young Irelanders. He then worked for Saunders’s Newsletter (or Saunders), a Dublin Conservative journal which ran from 1746 to 1879, and was made a Special Correspondent for the West of Ireland. Over a period of four months in late 1861 and early 1862 he visited seven of the most distressed western counties – Galway, Clare, Mayo, Sligo, Donegal, Leitrim and Roscommon. His travel accounts were first published as a series of letters “in relation to the condition and prospects of the people, consequent upon the partial failure of agricultural produce, caused by unfavourable harvests during the last two years” (Coulter, 1862, i).

In December of 1861, following a visit to Co. Clare, Coulter “crossed from Ballyvaughan to the town of Galway in a hooker, making the run in an hour and a-half; and from thence went on by one of Bianconi’s excellent cars to Clifden, the capital of Connemara and the Joyce Country” (Coulter, 1862, 79). He toured extensively throughout Connemara, and indeed north Galway – Tuam and Headford.

The book is finely illustrated (though there is no detail about the artist), with black and white and coloured sketches of urban and rural scenes. Although the illustrations were not specially referred to in the text, it was stated that they were “introduced as characteristic of the country and the people” (Coulter, 1862, i). The two “Claddagh Scenes” featured here are coloured sketches entitled “ Lane in the Claddagh (Galway)” and “Fish Market, Claddagh (Galway)”.

Lane in the Claddagh (Galway)
This illustration depicts two women and a young girl (or perhaps boy, as they were often similarly dressed). One of the women is lame and using a crutch, and appears to have her left arm extended seeking alms. A thatched Claddagh cottage can be seen in the background.

Fish Market, Claddagh (Galway)
This illustration shows a street urchin playing with a spinning top, in front of a Claddagh woman, dressed in distinctive red shawl and white apron, with a fish-laden skib under her arm, selling fish. Behind the pair, there is a women conversing with a local fisherman smoking a dudeen (dúidín), or clay pipe. Hooker masts can be seen in the background, the white flag on one of the masts perhaps indicating the boat belonging to the “King of the Claddagh”.

Although titled, “Fish Market, Claddagh”, the fish market in which the Claddagh women sold their catches was in fact situated on the opposing (east) bank in the open area in front of the Spanish Arch.