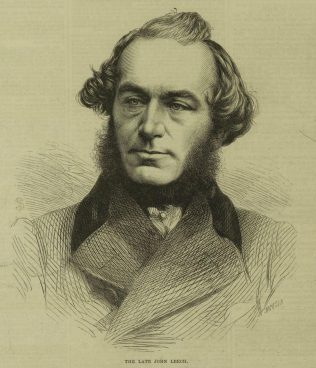 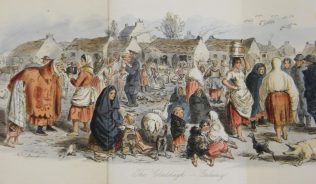 
A Little Tour in Ireland, written under the pseudonym “Oxonian” (a member, or former member, of the University of Oxford), was first published in London in 1859. A reprint of 1892 names Samuel Reynolds Hole, Dean of Rochester and horticulturist, as the author. It is a travel account, illustrated by the renowned Victorian artist, John Leech, of a fortnight’s tour in Ireland undertaken in the summer of 1858.

Leech (1817-1864), whose father hailed from Ireland, had shown artistic ability from a young age. In 1841 he began illustrating for the (in)famous Punch magazine. Two years later, he began a series of “cartoons”: full-page satirisations of the Westminster Hall murals; his title stuck and so effectively Leech gave to the English language the meaning of the word “cartoon” as a satirical print. However, he is perhaps best remembered for his illustrations of Charles Dickens’s classic A Christmas Carol (1843). The vibrant coloured illustration of the Claddagh featured here appeared as a fold-out section within A Little Tour in Ireland . It depicts a lively scene of the local community set against the backdrop of the famous Claddagh cottages.

Hole (1817-1904) graduated from Oxford University in 1844 and was ordained a priest the following year. Hole and Leech met in 1858, becoming close friends and hunting partners, and later that same year crossed the Irish Sea together to tour Ireland.

The duo sailed from Holyhead to Kingstown Quay (now Dún Laoghaire) and, after a whistle stop tour of Dublin, left Dublin by the Midland Great Western Railway for Galway. The Galway they visited was reeling from the after effects of the Great Famine (1845-51); the population fell by 20% to about 16,000 between 1851 and 1861. On arrival the pair booked into the Railway Hotel (formerly the Great Southern, and now the Meyrick Hotel). Once settled, Hole and Leech decided to take a sightseeing trip about the town and Claddagh Village. The following abridged extract recounts their visit:

CHAPTER IV: FROM DUBLIN TO GALWAY

[…] Having secured out places for the morrow on the Car to Clifden, specially stipulating for “the Lake side” of the conveyance, we selected a shrewd-looking lad from a crowd of candidates (the Roman candidati wore white togas in the market-place, but these young gentlemen did not), and went in to see the sights. We saw a great deal that was very interesting, and a great deal that was very dirty; we saw the traces of Spanish architecture, in quaint gateways and quadrangular courts, but were not “reminded of Seville,” our only association with that city being a passionate love of marmalade; we saw Lynch’s castle, and its grotesque carving is very curious; we saw the house in Deadman’s Lane, where lived that Fitz-Stephen, Warden of Galway, who, according to the worst authenticated tradition, assisted at the hanging of his own son; we saw warehouses sans ware; granaries, some without grain, and others with “the meal-sacks on the whitened floor;” we saw and greatly admired Queen’s College; we saw chapels and nunneries, whence the Angelus bell sounded as we passed; above all, we saw the Claddagh […]

The Englishman who desires a new sensation should …

The Englishman who desires a new sensation should pay a visit to the Claddagh . When we arrived, the men were at sea; but the women, in their bright red petticoats, descending half-way down the uncovered leg, their cloaks worn like the Spanish mantilla, and of divers colours, their headkerchiefs and hoods, were grouped among the old grey ruins where the fishmarket is held, and formed a tableau not to be forgotten. Though their garments are torn, and patched, and discoloured, there is a graceful simple dignity about them which might teach a lesson to Parisian milliners […]

I should imagine them to be one-third Irish …

As to the origin of these Claddagh people, I am not sufficiently “up” on ethnology, to state with analytical exactness the details of their descent; but I should imagine them to be one-third Irish, one-third Arabian, and the other Zingaro, or Spanish gypsy. I thought I recognised in one old lady an Ojibbeway chief, who frightened me a good deal in my childhood, but she had lost the expression of ferocity, and I was, perhaps, mistaken.

A good store of drink and tobacco …

The men are all fishermen (very clumsy ones, according to Miss Martineau, who talks about harpoons as if they were crochet needles, in her interesting “Letters from Ireland”); but they give up their cargoes to the women on landing, only stipulating that from the proceed they may be supplied with a good store of drink and tobacco, and so get due compensation on the shore for their unvarying sobriety at sea.

Cocks and hens roost in the parlour …

They live (some 1500 souls in all) in a village of miserable cabins, the walls of mud and stone, and for the most part windowless, the floors damp and dirty, and the roofs a mass of rotten straw and weeds. The poultry mania – ( and if it is not mania to give ten guineas for a bantam, in what does insanity consist?) – must be here at its height, for the cocks and hens roost in the parlour. But “the swells” of the Claddagh are its pigs. They really have not only a “landed expression,” as though the place belonged to them, but a supercilious gait and mien; and with an autocratic air […]

One likes the people of the Claddagh …

Nevertheless, one likes the people of the Claddagh; they seem to be honest, industrious, and good-tempered, and they have, at least, one great virtue – like Lady Godvia, they are “clothed on with chastity.” Sir Francis Head, who had the best means of getting information from the police, and used them with his exhaustive energy, could not hear that there had ever been an illegitimate child born in the Cladagh. They never intermarry with strangers, and “their marriages are generally preceded by an elopement” (vide the article on “Galway,” in the Encyclopaedia Britannica , which one is surprised to find discoursing on such festive pleasantries), “and followed by a boisterous merry-making .” (An Oxonian, 1859, 37-44)