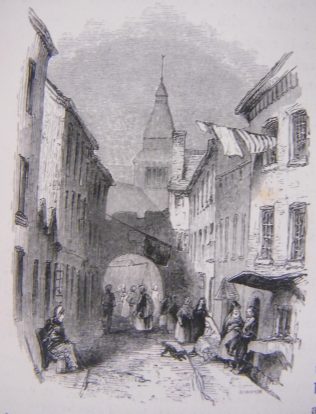 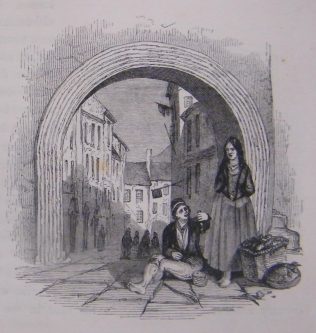 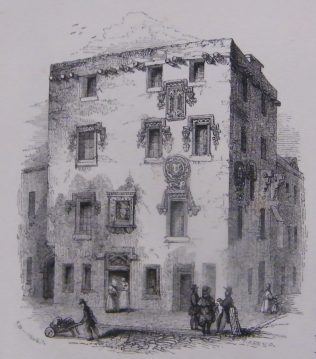 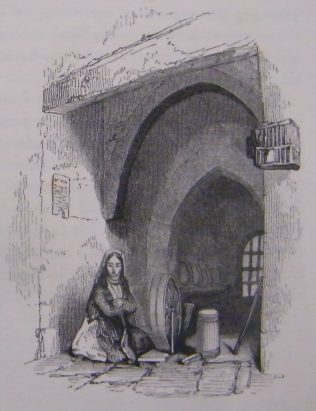 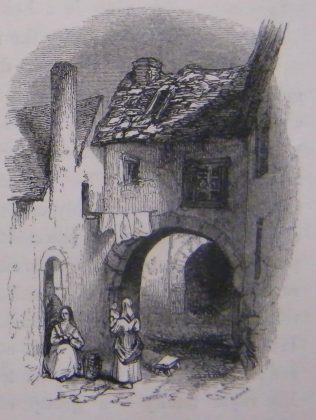 Between 1841 and 1843, Samuel Carter Hall (1800-1889), and his wife Anna Maria (1800-1881), compiled a three volume guide to Ireland. Entitled Ireland: Its Scenery, Character, &c. the book is a mixed travelogue and social commentry and is well-illustrated by William Evans of Eton. Each chapter is dedicated to a different county; volume III focuses primarily on the counties of the provinces of Ulster and Connacht.

Samuel Carter Hall was born at Geneva Barracks, Co. Waterford. His father was an English-born army officer, and later a speculator. In 1822, Samuel Carter left Ireland for London, where he met and married an Irishwoman, Anna Maria Fielding. He worked as a parliamentary reporter for a number of journals, including the British Press , after which he wrote and edited for several newspapers and journals. Sameul Carter was a benevolent tee-totaller but puritanical, and often rubbed people the wrong way, most famously Charles Dicken; he is widely regarded as the model for Dicken’s character Seth Pecksniff, the greedy achitect, in The Life and Adventures of Martin Chuzzlewit (1844). Samuel Carter’s wife, Anna Maria, was a significant writer in her won right; her most significant works focussed on Ireland and the Irish.

The tourist on approaching Galway Town perceives other evidence that he is in a peculiar district; the dark features and coal-black hair of the people indicate their Spanish descent; and they are, for the most, so finely formed, so naturally graceful, that almost every peasant girl might serve as a model for the sculptor. Passing along the narrow streets, he is startled by greater singularities; houses with remains of “jalousies,” and arched gateways, elaborately carved, mingled with modern buildings, indicating the comparatively unchanged “aspect” of the inhabitants and their dwellings; such, – for example, as this ancient gateway, through which is seen the aged, venerable, and most interesting, church [Collegiate Church of St. Nicholas], full of the very singular and picturesque remains of antiquity.

These records of old time are rapidly falling into ruin; only a few portions of the “walls” remain; even the Moorish eyes and complexions are not as common as they used to be; and probably in a few years Galway will have lost its distinctive character. The “remains” are, as we have intimated, very varied in style; they belong, indeed, to no order of architecture, but seem to have been designed according to the whim or fancy of the builder. The observation applies not only to the private residences, but to the public structures. The history of Galway is full of interest – from the year 1178, when the Anglo-Normans first set foot in Connaught to the war of the revolution, when the town surrendered, upon honourable terms to the victorious Ginkle, who had previously routed the Irish forces at Aughrim.

During all the terrible contests of centuries, Galway had its ample share of glory and grief; participating largely in the persecutions of the several periods, but maintaining a high character for courage and probity throughout. Of its old strengths as a fortified town there are, as we have intimated, few remains; but of its former wealth and splendour, as compared with other towns of Ireland, there are many; the exhibit, generally, tokens of commercial habits of the people rather than of their military character. The house still known as “Lynch’s Castle,” although the most perfect example now remaining, was at one period by no means a solitary instance of the decorated habitations of the Galway merchants. Nearly every lane and every alley contains some token of their grandeur; and over doorways of a very large number of the dilapidated houses are still standing the armorial bearings, carved in stone, of the early occupiers.

So remarkable, indeed, are those “bits” of Spain transferred to the wild West of Ireland, that Mr. Inglis, who had visited the former country a short time previous to his tour in the latter, thus refers to the resemblances he observed between them: “I had heard that I should find in Galway some traces of its Spanish origin, but was not prepared to find so much to remind me of that land of romance. At every second step I saw something to recal [sic] it to my recollection. I found the wide entries and broad stairs of Cadiz and Malaga; the arched gateways, with the outer and inner railing, and the court within – needing only the fountain and flower vases to emulate Seville. I found the sculpted gateways, and grotesque architecture, which carried the imagination to the moorish [sic] cities of Granada and Valencia. I even found the little sliding wicket for observation in one or two doors, reminding one of the secrecy, mystery, and caution observed, where gallantry and superstition divide life between them.” (Hall, 1843, 451-6)