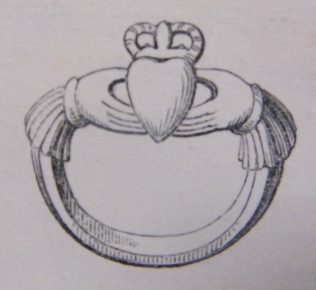 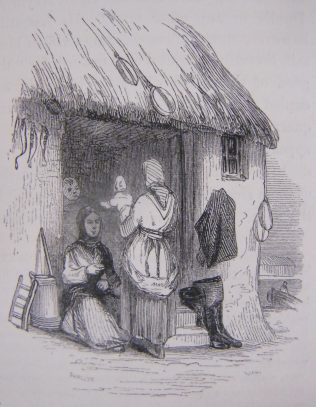 In the course of the book, Mr. & Mrs. Hall name its illustrator as a Mr. Evans, of Eton:

The examples we give were selected almost at random by Mr. Evans, of Eton, to whom we are indebted for the majority of illustrations which ornament this portion of our work. We are fortunate in having obtained the co-operation of so accomplished an artist; and lament that the beauty of his coloured drawings cannot be satisfactorily transferred to our pages by aid of wood engraving (Hall, 1843, 456).

William Evans (1798-1877), known as Evans of Eton, was a renowned watercolour painter. His father, Sameul Evans (1762-1835), a topographical draughtsman, taught drawing to the youngest daughters of George III. William attended Eton College and in 1823 was appointed drawing-master of Eton. He was elected an associate of the Society of Painters in Water Colours in 1828, becoming a full member in 1830. Evans was very familiar with the West of Ireland. In 1838 he toured Connemara, and returned with his former pupil, Thomas Gambier Parry, two years later. For the mostpart, the Galway wood engravings, which illustrate Ireland: Its Scenery, Character, &c., appear to have come from a series of watercolours painted by the artist as the result of his visit of 1838.

From 1845 onwards Evans began adding “of Eton” to his signature in order to distinguish himself from William Evan of Bristol (1809-1858), the English landscape painter.

If, however, in the town are to be found the records of a peculiar people, in one of the suburbs a people equally peculiar still exist, retaining to-day the customs and habits they have kept unchanged for centuries. The inhabitants of the “Claddagh” are a colony of fishermen, and they number, with their families, between five and six thousand. Their market-place adjoins one of the old gates of the town, and is close to the remains of a fortified tower. Here they sell their fish, but it is apart from their own dominion – “their own dominion” it may be called literally, for they are governed by their own king and their own laws: and it is difficult if not impossible, to make them obedient to any other.

The Claddagh is a populous district lying to the right of the harbour, consisting of streets, squares, and lanes; all inhabited by fishermen. They claim the right to exercise complete and exclusive control over the bay, and, indeed, over all the bays of the county. They are peaceable and industrious, and their cottages are cleaner and better furnished than those of most of the Galway dwellings; but if any of the “rights” they have enjoyed for centuries are infringed, they become so violent that nothing can withstand them.

As powerful as a despot …


This singular community are still governed by a “king” elected annually, and a number of bye-laws of their own; at one time this king was absolute – as powerful as a despot; but his power has yielded, like all domestic powers, to the times, and now he is, as one of his subjects informed us, “nothing more than the Lord Mayor of Dublin or any other city.” he has still, however, much influence, and sacrifices himself, literally without fee or reward, for “the good of the people;” he his constantly occupied hearing and deciding causes and quarrels, for his people never by any chance appeal to a higher tribunal. In the Claddagh, too, there are many remarkable remains of those singular antiquities which prevail in the town. As an example, we engrave one of the peculiarities of this quarter.

There is no town in Ireland so interesting as Galway …

Their king is completely one of themselves; his rank and station being only indicated, according to Mr. Hardiman, by a white sail and colours flying from the mast-head of his boat, when at sea – where he acts as “admiral.” They have many peculiar customs: one is worthy of especial note. The wedding rind is a heir-loom in a family. It is regularly transferred by the mother to her daughter first married; and so on to their descendants. These rings are large, of solid gold, and not unfrequently [sic] cost from two to three pounds each. The one we have here copied had evidently seen much service. Some of them are plainer; but the great number are thus formed. The people are, in general, comfortably clad; and their houses are, for the most part, neatly furnished. We entered several of them, and among others, that of the ruler of the district. His majesty, however, was at sea; but we were introduced to his royal family – a group of children and grandchildren, who for ruddy health might have been coveted by any veritable monarch of Christendom. His cottage the reader may examine. Taken altogether, this primitive suburb included, there is no town in Ireland so interesting as Galway; and none that affords stronger temptations to the enterprising capitalist or, indeed to those who, with limited means, desire to obtain not only the necessaries but the luxuries of and enjoyments of life at small cost. (Hall, 1843, 456-9)