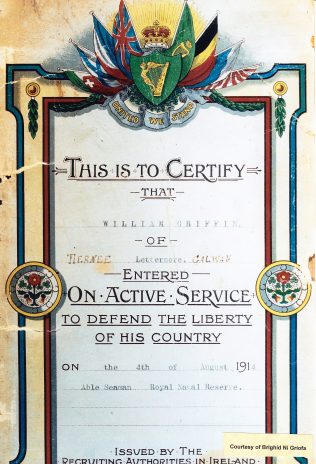 Willie Ó Gríofa was born in Tír an Fhia, Leitir Móir in Connemara 34 miles west of Galway city on the 8th May 1881. Willie was the son of Pádraig Ó Gríofa known locally as Patch Ó Gríofa and Bríd Ní Dhonnachadha from Ros a Mhíl. Willie was a member of seven children he had three sisters and three brothers. Willie married Nan (Áine Newell) from Ros Cíde in Ros Muc and they lived in Tír an Fhia. They had nine children, five sons and four daughters.

For many years I had heard various stories regarding a torpedo incident and sinking of a ship and that Willie was on a raft in Mediterranean Sea, these stories were retold in our house by my father Pat Willie Ó Gríofa (RIP). In the last few years I embarked on finding out what really happened to this great man, who seemed to have travelled many seas while serving in the Royal Naval Reserve.

My research lead me and my two sisters to the National Archives in Kew near Richmond in London. This place is certainly worth a visit and we were amazed that they had so much information regarding my grandfather. It seems that on the 1st October 1904 at 23 years of age my grandfather Willie Ó Gríofa joined Royal Naval Reserve. The Royal Naval Reserve was established in 1859 as a reserve force of officers and men of deep-sea merchant ships.

Willie served three consecutive five-year periods in the Royal Naval Reserve from 1904 – 1919. During this time we have established from the research, which we carried out that he served on many war ships and steamers during his time in the Navy, ships such as the HMS Victory, HMS Hannibal, HMS Dolphin and the HMS Sarnia plus others.

One adventure which my grandfather Willie had mentioned to others while alive was his escape from death on the 12 September 1918 when the ship on which he was serving on the HMS Sarnia was torpedoed by a German submarine U65. In 1918 at the height of the First World War any ship which carried an English flag was target by any German U-boat lurking in the open seas. My grandfather was indeed on board a raft, which drifted for up to thirty hours or more in the open waters of the Mediterranean ocean. We were delighted to get the proof of this particular incident in the National Archives. As the records show he and his other comrades were eventually picked up by the HMS Hannibal and were taken to Alexandria in Egypt. Willie was awarded two medals for his many years of service in the Royal Naval Reserve. He was awarded the Victoria Medal for his participation in the First World War from 1914 to 1918 and the British War Medal for his service abroad from 1914 to 1918. We also believe that he may have served near Gallipoli and the Dardanelles as he also mentioned these two places quite often. He was also present in O’Connell or Sackville Street as it was known then during the Eastern Rising in 1916

My cousin Máírtín recalls his father Johnny Willie (RIP) telling him of one incident when our grandfather Willie was home in Tír an Fhia and was about to embark on sewing a field of potatoes when uniformed officers arrived at his doorstep to notify him that his services to Royal Naval Reserves were required. My grandmother Nan wondered from time to time if her husband was ever to return again when there were long periods of time when she hadn’t received any letters from him while he was abroad on Naval Services.

Willie Ó Gríofa died on the 7th September 1954 and is buried beside the sea in Barra a Doire cemetery in An Cheathrú Rua. He is buried with his late wife Áine, who died on the 1st May 1964, his father Paitch and mother Bríd and his daughter Áine his brothers as well as other family members.