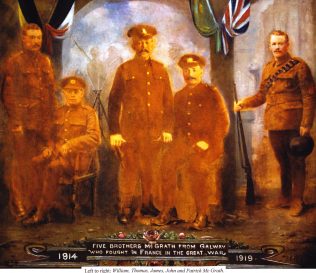 My great-grandfather, Michael, was from a town land called Lehid in Kilconly, Tuam, Co. Galway. He was the eldest of a family of six brothers and one sister and they lived in a thatch cottage on a small plot of land. All the brothers and their father travelled over to the Manchester area every summer for seasonal work on the farms in the Lancashire area.

Although my great grandfather, Michael, came back and settled in Galway his five brothers stayed in England and all enlisted and fought in the Great War. William, John, James, Thomas and Patrick saw action in Europe and India. All five brothers survived the war and came back to live in the Oldham area of Manchester.

Michael Mc Grath did not join the army but returned to Ireland from Oldham. He moved to 15 Demesne Cottages, Tuam, where his grandson (also Michael Mc Grath), my father, still lives.