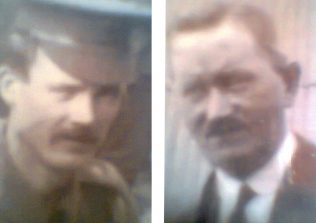 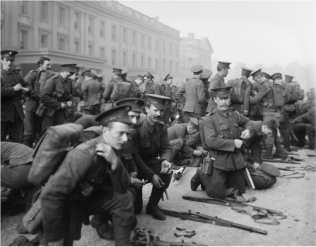 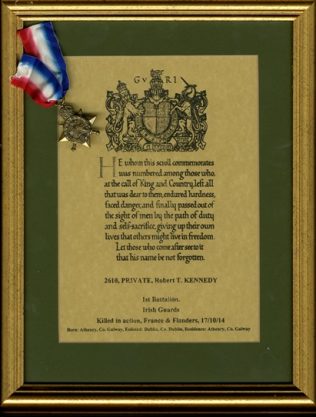 My Grandson, Francis Xavier Shovlin, aged five, who goes to school in Liverpool, came home from school on November 11th this year and told his father that, in school that day, they had done, ‘the silence for the soldiers’.

In Ireland, and in my family, the ‘silence for the soldiers’ lasted for over sixty years. This silence was broken, for me, only in the early nineteen eighties when I came across a Kennedy family ‘tree’ which showed that my Granduncle, Robert Kennedy, born in 1884 in Athenry ,was’ killed in action’ in Flanders on October 17th1914.

Robert Kennedy was my Grandfather’s brother. But he never made mention of him, nor of his death in the Great War: needless to say, because ‘fighting for England’ was held to be a source of shame in Ireland.

Happily, by research, I have managed to end the silence regarding 2610 Pvt. Robert Kennedy, late the Ist. Batt. the Irish Guards. And by a miracle of coincidence have found his picture among a group of soldiers ‘mustering for France’ in the Galway Museum’s exhibition honouring the service and memory of Lt. Col. The Hon George Morris, who was Commanding Officer of my Granduncle Robert Kennedy’s battalion.

Happily, in this country, we no longer keep the decades-long, shameful ‘silence for the soldiers’.

NOTE:
Born in 1886, the son of Thomas Kennedy, Athenry, Robert enlisted in Dublin on 6 June 1906. Robert was killed in action on 14 September 1914 at Soupir, France. He is remembered at the Menin Gate Memorial to the Missing at Ypres, Belgium.