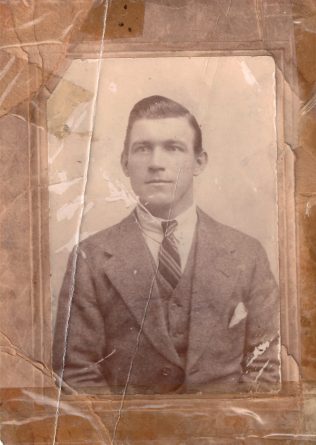 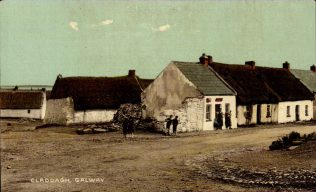 We heard nothing about the War from him [father] … never told us anything about it. … it was the same way with everyone; nobody wanted to talk about it … I think it was too bad; it was death all around you; you were walking even on soldiers that were dead … they didn’t speak about it because it was too cruel to talk about it and they wouldn’t tell their children the horror of war.

He joined the Connaught Rangers; they used to have a queer shout going over the top, they were like a crowd of lions … it was some kind of war cry between them.

He used to say a few words from the war that we didn’t know; when Hamill [an Officer with the Connaught Rangers] used to call – ‘a cup of cha’ and he used to say ‘roti’ for bread – that was from his time in India.

After the war, when I was about 3 or 4, he used to have malaria. He used to be jumping in the bed, sweating like there was rain coming down off him and the doctor used to give him quinine. That was the only time I seen him very bad, he wasn’t so bad after that.

From what I can make out … he was very different when he came back, different entirely. Everything upset him, I think a lot of that too was he wasn’t making enough money for his family. We had a big family of nine children.

When I was growing up he was lovely, grand, he used to bring us out, myself and Paddy [brother], take us for walks. We’d be running, of course. He’d say “don’t be running. Walk!” He’d be walking like a soldier, he’d expect us to keep up with him, but we couldn’t, we were only young. Military walk all the ways up to the end. Even our dog Rover, knew he was coming without seeing him by his steps and would jump the wall and the two would come up the hill together.

Daddy was a boxer during the War – he used to train pull-ups over the door every day until he got older … God got him through the War and didn’t get him killed – thousands got killed – he got shot twice but not wounds that would kill you.

In my day, Mammy used to wear a red coat and a hat to go to town that she’d got in America. He changed that; he said “I want you to have the shawl, the way I met you.” He was that kind of a man, he wanted everything the way it was before. And she was in the shawl forever after that.

He got training in Tipperary and that’s where he took up his trade [cobbler] – you could take up whatever trade you wanted – he took shoes. But it was no good in the Claddagh back them days. Only six pence for a patch, oh they were hard times. A man named Hurley – he was in the War as well – he’d give a voucher to daddy for some bread and meat. That’s the way we lived, a bit here and a bit there.

The letters are lovely – for anyone that is in love – he liked my mother a lot and they were distanced apart. Wherever he was billeted, she’d write to him… the War destroyed many families when they came home because they must see in their mind the things they saw. In 1938, I said to my Father “I’d like to join the Army” I thought he’d be delighted – “No, no” he said, “you cannot do that”.