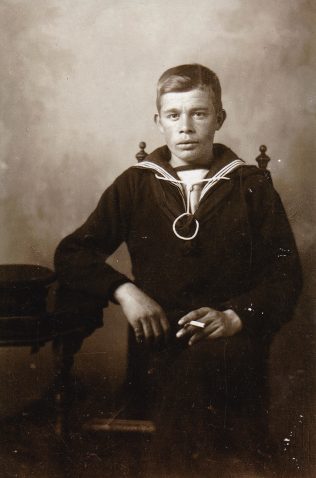 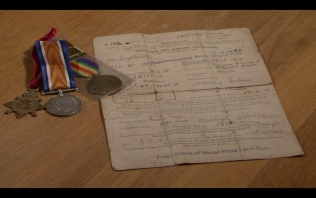 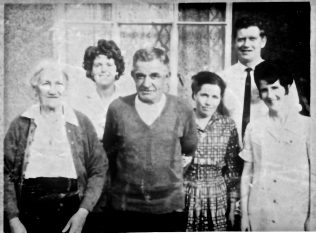 Walking from our home in Woodquay to my grandfather’s house back in Claddagh seemed like a long trek for a young child. On opening the green iron gate swinging off it until it opened fully and then running down the pathway to the large grey wooden door. Opening the door to the kitchen often to the sound of my grandfather humming to himself as he played solitaire on the small table inside the large window of his home in Beattystown. We knew him as Dado but to most of his neighbours and friends they called him Kruger.

During the summer months he would pass the hours out in the long back garden tending his potato ridges and laying the seaweed he would have gathered from the shore off Grattan Road. I wonder as he walked along the shoreline did his mind ever stray back to the days when he left the quiet Claddagh fishing village in 1915 and joined the Royal Navy Reserve. My father says he rarely spoke about the war. Sometimes after a few pints he might tell a story or two about his time on the high seas. He does remember him telling of having to keep watch as the ship he served on, the HMS Implacable deck was strewn with dead bodies that they had picked out of the sea and the eerie feeling of the night watch.

His last remaining daughter Rita and her husband Mick remember him fondly. Mick worked with him in the 1960’s as they both were tenders on the Galway Bay boat, meeting liners that anchored in Galway, taking passengers and mail from the US into Galway docks. Rita once enquired about the mail he was getting from Britain (probably his pension) and what it contained, only to be told to mind her own business. He was not a man to give away to much information! She remembers one of his other pastimes of catching small birds, trapping was a hobby of many of the men around the area at that time. Myself and my cousins remember this as well. Rita remembers her mother setting the birds free one time and after he asked why she did it was told how would he have felt to be trapped in a cage like they were.

It was while gathering information for a college project that I started to become more interested in my grandfathers past and his time served in World War One. I was surprised to find that my cousins had some interesting documents from his time at war along with his medals. I also was pleased to see the bronze death penny that I remember playing with as a child that had its place on the black dressing table in the corner of the kitchen. This belonged to my grandmother’s brother Patrick McGrath who was killed in action.

Like many of my generation we can only wonder what it was like for men like my grandfather to have left their homes in what was then a small fishing village to go to war. Many of them did not return and those that did for many reasons did not want to talk about their experiences. On the hundredth anniversary of the beginning of the war it’s time for us to remember them and take pride in their place in history.