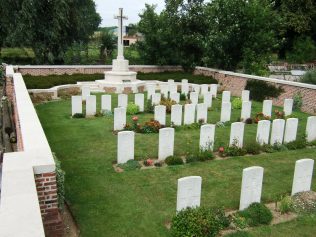 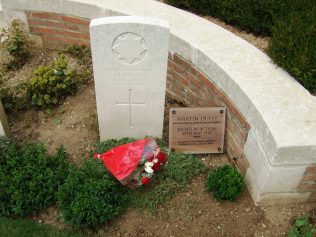 My grand-uncle, Private Martin Duffy (son of Thomas and Margaret Duffy, Knockmaskehill, Glenamaddy, Co. Galway), served with the 2nd Battalion of the Irish Guards regiment up until his death on the 28th May 1918. He was survived by his brothers John (my grandfather) and Thomas Duffy and his sister Mary Brennan.

Martin enlisted with the British Army (Irish Guards regiment) on the 19th of April 1915 in Manchester at the age of 31. He carried out most of his training at Warley Barracks before joining ‘’the field’’ in France on the 26th of August 1916. He became ill in January 1917 and was sent back to the UK where he spent several months in hospital before being sent back out to France and rejoined the war on the 27th of June where he continued to fight in the war until his death on May 28th 1918 at the age of 34.

He is laid to rest in Ayette British cemetery in the Pas de Calais region of Northern France. In August 2009 I located and visited his grave, the first of his family to do so since his death in 1918.

The ‘’Widow’s Penny’’ which was sent home to his next of kin to commemorate Martin’s death in the Great War of 1914-1918 is still held by the family today.