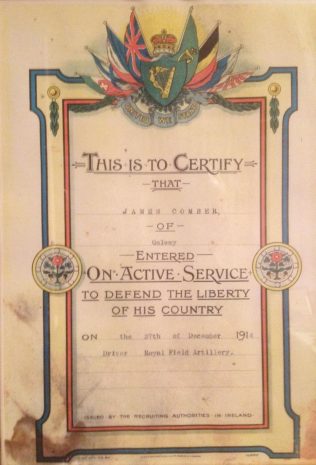 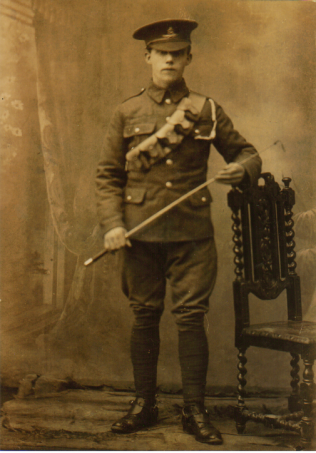 James or Jim Comber, as he was better known enlisted in the British Army on 27 December 1914, aged 18, at the Army Recruiting Office, Renmore Barracks, Galway.

His initial military training was most likely undertaken at Victoria Military Barracks, Athlone. Completion of Jim’s training was probably conducted in England (at Woolwich Royal Artillery Depot) prior to his being posted on active service to France and Belgium. According to my granduncle’s discharge papers and his Certificate of Enlistment (shown above), he served with the Royal Field Artillery (RFA); ‘A’ Battery, 106th Brigade, RFA, 24th Division. Born on the 22 January 1896, Jim Comber was reared in the ‘new’ family home at 4 Blake’s Lane, Bohermore, Galway. The 1911 Census informs us that he lived there, along with his two older brothers; John and Michael and his two sisters; Mary and Annie. Jim returned home to Ireland in 1920, to anything but the hero’s welcome he deserved!

Jim or ‘Staff’, as he was nicknamed, spoke very little, if at all, about his wartime experiences. However, close family members did become aware of some of the horrors that he had experienced during his time on the Western Front. As a consequence of his injuries, Jim carried with him, throughout life, a constant reminder of the great pain and suffering the Great War had served to inflict both physically and psychologically on all concerned. His own wounds consisted of irremovable fragments of shrapnel, collected at either Mons or Ypres, which were lodged close to his spine. This happened as a consequence of his field gun and gun crew being obliterated by a close hit from an enemy shell. In addition to this, he sustained gas injuries to his respiratory system, which eventually led to his death in 1961.

No 31, 506, Driver James Comber, RFA died on the 1st January, 1962, aged 66 years and is buried in the family grave at the New Cemetery, Bohermore, Galway, in the company of his beloved wife Delia and his daughter Annie.