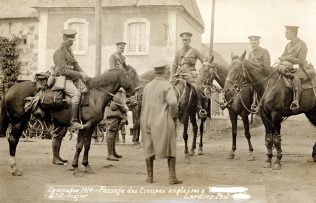 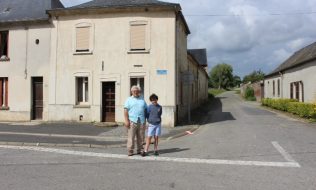 On 1st September 1914, my grandfather, George Henry Morris from Spiddal, Co. Galway, was killed in France, within two weeks of his arrival as part of the British Expeditionary Force following the declaration of War. He was in command of the Irish Guards during the Retreat from Mons.

One hundred years later, to the day, a family group, Grandchildren and Great Grandchildren, travelled to France to mark the occasion. The first stop on our journey was the town of Vadencourt. The only photograph existing of George in France was with other officers on a street corner in that town. We found that nothing much had changed – it became our first photo opportunity!

The next morning we went to The Guards Grave in the Forest of Retz, near Villers-Cotterêts. It was here that he was killed. As we walked to the grave we passed a coach load of similar visitors being briefed by their guide. We overheard him say “and they were commanded by Colonel Morris”. He spoke then about George’s bravery and told the story of George saying to his men ‘Don’t worry, the Germans are only shooting to frighten you’ to which came the reply from a guardsman, ‘ Well they can stop now, they succeeded with me a long time ago’. The guide’s comic timing left a bit to be desired, but it filled us with pride.

Cameras clicked. Many photographs were taken. The visit needed to be recorded. This will never happen again. We laid a wreath and some photographs and my brother Michael cheekily placed a packet of Major cigarettes on the grave! The irony was not lost on us. George had been an inveterate smoker, almost never without a cigarette between his lips. The day came to an end. We wandered through the forest each with our own thoughts. Something we had planned a year ago had come to fruition. It had been an emotional and uplifting moment to be, 100 years to the day, where George had been killed and to stand by his grave.