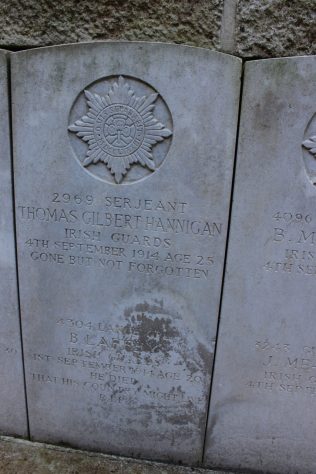 My late grandmother, Delia Lawless, was thirty-seven years old when her brother Bernard Laffey went to serve as Lance Corporal in WW1. He was just twenty years old and was the youngest of eleven children with five sisters and five brothers, his parents were Michael and Catherine Laffey, Clooncah, Woodlawn, County Galway.

Bernard wrote a letter to his mother on August 4th 1914 and he was very optimistic about preventing the Germans from entering Belgium. Within two and a half weeks of writing that letter he was killed on September 1st the same day as Lieutenant Colonel The Honorable George Henry Morris (father of the late Lord Killanin) who was leading the battalion.

My grandmother talked a lot about Bernard also the sadness and the loss that it brought to their home that he left as a young man and they never saw him again. One of the anecdotal stories that I can remember that she used to tell us is that, one night they heard tapping at the window and when they checked there was no one there, sometime later they received news that Bernard was killed. This must have been very sad for the family particularly when he was the youngest and the fact that they did not have a body to wake, which was the norm in rural Ireland, also there was no grave for them to visit and pray at.

Our family are very proud of our granduncle Bernard and the sacrifice he made particularly losing his life along with the 50.000 other Irish men who fought in WW1.

My late Mother, Bridie, the former Mayor of Galway, often talked about visiting her uncle’s grave in the Guards Grave in Villers-Cotterêts Forest, Aisne in France, however she never made the journey to this War Memorial.