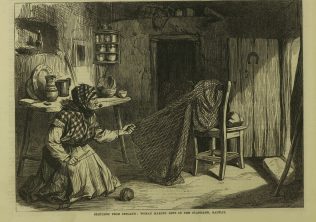 The Claddagh fishing village, situated outside the town walls on the opposing western bank of the river Corrib, and its inhabitants often attracted the attention of the Illustrated London News.

Here we see an illustration, which appeared in June 1870, showing a Claddagh woman making fishing nets in her cottage. The elderly woman is kneeling on the floor and working in the light coming from the front door; the chair is weighted down with a rock so as to provide some stability. She is wearing a shawl and apron so typical of the Claddagh women of the nineteenth and early twentieth centuries. A horshoe is hanging from the front door which according to tradition brings luck and affords protection from evil.

The following extract accompanied the illustration:

The ancient City of Galway, which was a place of great importance in the fifteenth and sixteenth centuries, having a rich traffic with Spain and the West Indies, has many curious features. It has a suburb called “the Claddagh,” inhabited by a race of hereditary fishermen, to the number of 5000, who live apart from the townspeople and keep up their own peculiar customs. The women of the Claddagh find much employment in mending the nets with which their husbands and brothers go out to sea, and on the produce of which their livlihood entirely depends. Our Artist has made a sketch of one of these women, occuppied in this needful work. A Claddagh girl, when she marries, will often bring a net and a share of a boat, as her dowry or marriage portion to the man whom she weds with her parents’ approval.