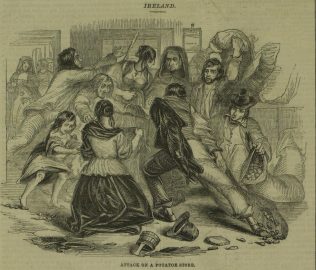 The Illustrated London News regularly reported on the Great Irish Famine (1845-51) and some of the best-known and most widely used images of the tragedy – Woman Begging at Clonakilty (1847); Boy and Girl at Cahera (1847); Bridget O’Donnell and her Children (1849); and Searching for Potatoes (1849) – come from the pages of this periodical. Between 1846 and 1850, more than forty Famine sketches appeared in the Illustrated London News , the majority depicting scenes in the south, south-west and west of Ireland.

However, this 1842 illustration of an attack on a potato store in the town of Galway, which pre-dates the Great Irish Famine, was a early indication of the tragedy on the horizon. The sketch and accompanying article record that the incident took place on the 13th of June during which a starving, desperate crowd attacked local potato stores and mills, in which oatmeal was stored, to liberate and distribute their contents. A force consisting of policemen and soldiers tried in vain to restrain the hungry masses.

The following account is taken from the Illustrated London News , dated the 25th of June, 1842:

The foregoing illustration is intended to convey an idea of the state of desperation to which the poor of Galway have been reduced by the present calamitous season of starvation; and although, according to present appearances, there is every reason to rely on the goodness of Providence for an abundant and early relief, yet it is calculated that more than another month of suffering and privation must elapse before succour arrives. The scene represented above is an attack upon a potatoe store in the town of Galway, on the 13th of the present month, when the distress had become too great for the poor squalid and unpitied inhabitants to endure their misery any longer, without some more substantial alleviation than prospects of coming harvest; and their resource in this case was to break open the potato stores and distribute their contents, without much discrimination, among the plunderers, and to attack the mills where oatmeal was known to be stored. During the entire of that day the town was in the possession of a fierce and ungovernable mob, led on apparently by women and children, but having an imposing reserve in the rear of the Claddagh fishermen. The Sheriff, with a strong force of police and the dépôt of the 30th Regiment, which constitutes the garrison, vainly attempted to restrain them. They assailed him and his armed bands with showers of stones, which wounded the commanding officer of the military party in the head, and hurt several of the men. But, with singular forbearance and humanity, the gallant Thirtieth held their fire, and, as it was impossible to disperse such a mob without firing amongst them, the millers were induced to promise that meal should be retailed on the following morning at 15d. a stone.

The joy-bells tang out a merry peal …

The discontent of the sufferers had been aggravated by the unfeeling, and, there was some reason to suspect, the dishonest artifices of those who had food to sell. Farmers, known to have abundant supplies of potatoes, had not only refused to part with any portion of them at the present high prices, but had actually sent into the markets and made purchases, in order to augment the scarcity. Numbers of dealers also, speculating on a rise, had stored quantities of provisions, which they refused to give out at a fair profit; and in several instances these persons had cleared out the markets the instant they were opened, and left the poor famishing housekeepers, with their money in their hands, in the midst of apparent plenty, unable to procure even the supply of a single day.

To this cause is to be attributed the various disturbances which occurred at Loughrea and Galway; the people insisting upon the farmers retailing provisions to them out of the sack, instead of disposing of its contents wholesale to huxters and forestallers; and the magistrates generally, with proper discretion and humanity, enforcing the reasonable demands of the people.

The Claddagh fishermen, to signalise their victory, insisted upon a general illumination of the town, and ordered the joy-bells of the collegiate church to ring out a merry peal. Their requisitions were complied with in both cases. The joy-bells tang out a merry peal, and the inhabitants in general put lights into their windows. Thus, for several hours, the capital city of Connaught remained in possession of a lawless rabble, while the armed authorities of the country retired before them.

The following is the latest account from this distressed district:– “Galway, June 20. (From our own correspondent). Since the disturbance of Monday last this town has been perfectly tranquil. The fishermen took to their boats and went to sea early in the week, and provisions having experienced a seasonable reduction in price, no further commotion is apprehended. It was feared that the country people, hearing of the violence committed on Monday, would not bring their goods into the market; and on Wednesday the supply was scanty from that cause. But an abundance of potatoes was brought in on Saturday, and sold a fourpence a stone. This is not an extravagant price, though a fraction over threepence always pinches the poor man; but in the present dearth of employment any price at all must distress him. Of the scarcity of money you may judge from this fact, of which I can assure you from personal observation, that at Loughrea, in this county, when the famishing people were riotously assembled to oppose the forestallers in the potato market, eggs were offered for sale at five for a penny, and chickens, quite fit for the pot, were sold for sevenpence a couple.

After a long drought we have been visited with seasonable and refreshing rain, which only seemed wanting to confirm our anticipation of an abundant and early harvest.