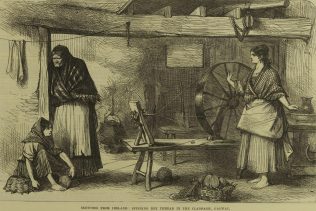 There was a clear division of labour between the men and the women of the Claddagh: the men fished and tended to the boats, the women sold the fish and were often, as this sketch shows, involved in the the making and repairing of nets.

The illustration shows three generations of females in a Claddagh cottage, two of whom are spinning cord in order to make nets. As with so many other images of spinning, the work is taking place where daylight falls through the doorway. A young girl, seated on an upturned basket, controls and feeds out yarn from two balls, which have already been spun; her mother, presumably, keeps the two lines taut, whilst allowing the moving spindle to combine them into stronger, two-ply cord (Kinmonth, 2006, 99).

Above their heads is the half-loft, a common feature of Claddagh cottage interiors, which was used for storing fishing tackle. In the smoke-filled background a pot may be seen over the hanging over the fire.