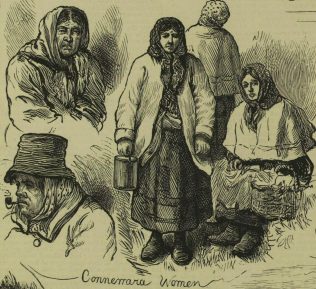 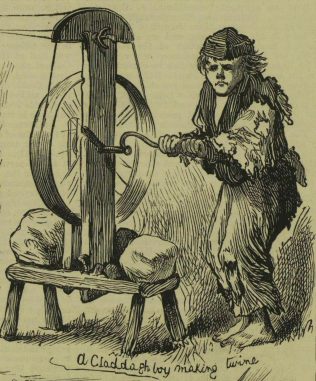 
The caricaturist, Harry Furniss (1854-1925), illustrated the following extract, which appeared in the Illustrated London News in January 1880.

Furniss was born in Wexford in 1854, the youngest son of James Furniss, an English civil engineer. The Furniss family moved to Dublin in 1864, where he attended the Wesley College on St. Stephen’s Green.

Although he had no formal art education, Furniss began working as an illustrator for the Dublin engraver, George Hanlon. In 1873, he left for London, and it was there he was to make his name as an illustrator, with several periodicals, including Punch.

In 1876, he became a staff member at the Illustrated London News, and sketches of rural life in Galway, which he had made prior to his departure, were given full page spreads.

Our Irish Sketches presented this week are those of characteristic and curious scenes in the old city of Galway. No place in the West of Ireland bears an aspect more distinctly associated with the long period of separation from the ordinary civil and social life of this kingdom, which was the lot of Connaught in former ages, and to which its backward condition in present times may in some degree be ascribed. It is true that the city was inhabited by English or Anglo-Norman colonists so early as the thirteenth century; and the family names of its principal residents, such as Blake, Lynch, Bodkin, Browne, Ffrench, D’Arcy, Joyce, Martin, and Morris, prove that they were not of purely Irish race. But they seem to have soon formed an almost independent local community, the chief members of which, engaging boldly in foreign maritime trade, more especially with Spain, acquired considerable wealth; and this city enjoyed for some generations a larger freedom of self-government than belonged to other thriving commercial towns of the realm.

A sort of native Irish Ghetto …

Galway, in fact, was by its remote situation, and by the disturbed state of the adjacent country, almost beyond the reach of the English regal power, except at certain intervals after a fresh conquest. The original Celtic tribes of the neighbouring county had gathered themselves in Connemara, a wild district lying west of Lough Corrib, towards the Atlantic shores, almost cut off from the mainland, but they were allowed to frequent the seaport of Galway and to make a settlement there. This is the quarter still distinguished as “the Claddagh,” a sort of native Irish Ghetto, retaining it peculiarities to this day. From this, probably, Galway was called “The City of the Tribes.” Though sadly decayed and defaced, the better parts of the city, though closely crowded together by the lines of the ancient walls and fortifications, display many fine old urban mansions, built in the Spanish style, with spacious inner courts, arched portals, broad stairs, and sculptured decorations, the homes of the merchant nobles like those of southern Europe. But the Claddagh is a cluster of rude cabins on the beach, where several thousand poor people, mostly boatmen or fishermen, or coasting sailors, dwell quite apart from the townsfolk, cherishing their own habits and customs,and speaking their own language.

They have, like gipsies till of late years, a code of laws …

It is said that they have, like gipsies till of late years, a code of laws and form of government administered by an elective monarch who is called in Galway “the King of the Claddagh,” and who is yearly chosen by “the Claddagh Boys” on the eve of St. John. A procession of men and women, wearing long faces of dock-stems, escort him through the quarter, and, when, proclamation has been duly made, bonfires are lighted in honour of his reign for the ensuing twelvemonth. His ensign is a white flag, and he is empowered to decide all quarrels and punish all minor offences among the Claddagh population, without troubling the police and the legal magistracy at all. These very original “Men of Galway,” indeed, seem to regard the shopkeeping, professional, official, broadcloth-wearing, English-speaking classes of the town as an inferior race of upstart new-comers, whom they call “transplanters.”

A lively notion of the appearance of this primitive folk …

Our Artist’s sketches on the quay at Galway, in the Claddagh, and those of a group of Connemara women, and of a boy, with a cumbrous sort of spinning-wheel, producing twine for the making of their fishing-nets, give a lively notion of the appearance of this primitive folk. It is much to be desired that some official effectual measures could be taken to revive the prosperity of Galway as a mercantile seaport. The bay, which is nearly thirty miles long and twenty miles wide, securely protected by the Arran isles at its entrance, is one of the finest natural harbours in the world, and the best adapted for an American packet station. Our middle-aged or elderly readers will perhaps bear in remembrance that an experiment in this direction was tried some twenty-five or thirty years ago; but we are not aware of any reason why it should not be renewed at some favourable opportunity with happier success. The population of Galway city is now under 16,000, having diminished one third in the last thirty years.