In the aftermath of the Norman invasion of Ireland in 1169, parts of this island were transformed in the same way as in England following William the Conqueror’s conquest in 1066: a new political authority and, in order to consolidate their conquest, the construction of formidable castles throughout the land.

In Limerick, the power, wealth, and political influence of invader Norman families – chiefly the FitzGeralds (earls of Desmond and earls of Kildare), De Burghs (Lords of Clanwilliam) and De Lacys (rulers of Bruree and its environs) – ensured that Limerick had more castles than any other county in Ireland: according to the work of T.J. Westropp (1906-7), approx. 400, built from c.1199–1650.1 Indeed, these families in particular would continue to rule as earls and lords until the mid-16th and 17th centuries respectively when their power was broken after the Desmond rebellion and Cromwellian wars.2

The Normans began constructing strongholds in the county after gaining a permanent foothold in Limerick after the death of Domnall Mór Ua Briain, King of Munster, in 1194. They founded castles at Askeaton, Carrigkittle and Caherconlish in 1199. These buildings were most likely wooden structures (motte-and-bailey or ringwork castles), built as fortifications against hostile Irish forces until the customary Norman stone castle could be constructed. To secure the strategically important city, Limerick Castle (‘King John’s’) was strengthened during the reign of John, King of England and Lord of Ireland (1199–1216).

After the inevitable baronial castle-building in the early decades of the 13th century, following the Norman settlement, there was, arguably, a lull in the building of castles until the 15th century. In 1429, Henry VI’s statute awarded a grant to those building a fortified castle, now better known as a tower house.

Manor castles like Adare, Newcastle West, Askeaton and Carrigogunnell, and 15th and 16th century castellated towers – such as Carrigareely (De Burgh), Ballyegnybeg (De Vale), Ballingarry (De Lacy), to 16th-century strongholds like Knocklong (O’Hurley), Kilduff (MacBrien) and Gortnetubbrid (FitzGerald) – is where much of our bloody history was played out.

Thus, this rich built heritage that still dominates our landscape continues to serve as a visual reminder of our turbulent past.

1 T.J. Westropp, ‘The Ancient Castles of the County of Limerick’ in PRIA, vol. xxvi (1906–07).
2 The earls of Kildare, barring the Silken Thomas rebellion in the 1530s, would survive as major landowners in Limerick into the late 17th century.

This map (which will be updated) gives an approximate location of some of the many castles in the county of Limerick. 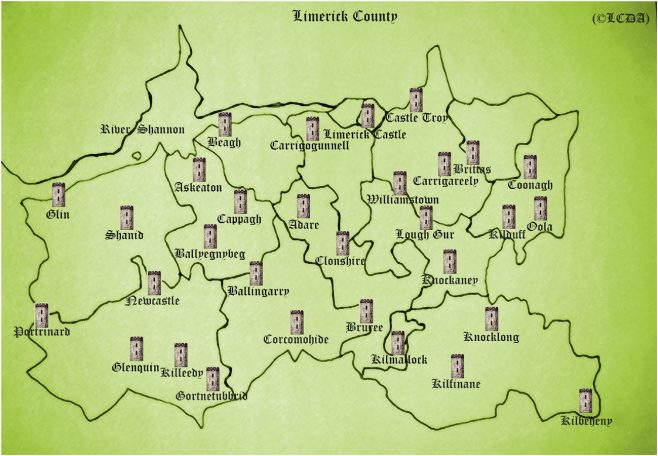