Sacred Space in the City 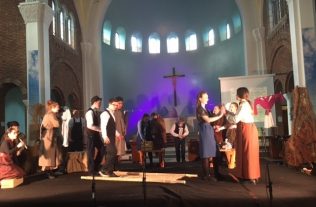 Ministering in the City: A Creative Experiment

For the first time in history, a majority of the world’s population is now living in urban areas, and this is no less true of Ireland. Two thirds of the Irish population live in the cities or the suburbs. Historically, places of worship have been a key point of reference in urban life and residential development, and often featured prominently on a city skyline. But in contemporary architecture the lime-light has been taken over by office blocks or shopping malls, and any buildings or gathering places are stripped of any religious symbolism lest they offend. This reflects the secularization that has taken place in society and the separation between the sacred and the profane that exists in many people’s lives. “There is a crisis of interiority in our culture and with it a great alienation of the self from tis spiritual roots and sources.”[1]

Yet, there has always been a special connection between faith and the city. ‘The Church originally took shape in the large cities of its time, and made use of them to spread.’[2]  In the face of the present-day secular challenges that one finds in the city, it is faith that motivates one to keep a presence, and to see God present in the life of the people:

Faith teaches us that God lives in the city in the midst of its joys, yearnings and hopes, and likewise in its pains and suffering. The shadows that mark everyday life, such as violence, poverty, individualism and exclusion cannot prevent us from seeking and contemplating the God of life also in urban environments.[3]

Being parish administrator in the north inner city has been a very enriching experience for me. However, when I first started I was a bit apprehensive.  How does one minister in the inner city? How does one connect with people? How does one make the sacred relevant for them?

To read the full article, please open the .pdf document below.