Lives of Our Irish Ancestors: Homes for WWI Vets

As many people know, researching family history often results in numerous twists and turns. What started out as a project to find out about an Irish ancestor who served in World War I turned into a project to learn more about a housing program established for Irish veterans of the war.

On June 4, 1918, Lord Lieutenant–Field Marshal John French, in an effort to escalate the recruitment campaign in Ireland, issued a proclamation that in part stated, “We recognize that the men who come forward and fight for their motherland are entitled to share in all that their motherland can offer. Steps are, therefore, being taken to ensure, as far as possible, that land should be available for men who have fought for their country and the necessary legislative measure is now under consideration.” Thus began a program that was to become the Irish Sailors and Soldiers Land Trust, a program that eventually built close to 4000 “Homes for Heroes” for Irishmen who served in the British military during World War I.

While the program was designed to help veterans, it also benefited the British government. As the war progressed and the number of servicemen killed or injured continued to mount, the British had a critical need for additional soldiers. The French proclamation was seen as a way of encouraging enlistments in Ireland.

The war also brought to light the need to increase the supply of home-grown agricultural goods in Britain. The housing program was seen as a way of reviving the agricultural community by encouraging veterans to move to rural communities to either work on or operate a farm, thereby reducing Britain’s dependence on imports.

As the war grew to a close, Britain’s attention focused on the rejuvenated republican movement in Ireland. The government was concerned that unless what was estimated to be between 120,000 and 200,000 returning Irish servicemen found decent housing and job opportunities, they might be encouraged to join Sinn Fein and its military arm, the Republican Army.

Regardless of the motives behind the Homes for Heroes program, it did provide much needed help for at least some of the brave men who served in World War I. The houses, or cottages as they were called, were built throughout Ireland, with over 2700 constructed in the south and over 1200 in Northern Ireland. This was not very many considering the number of returning veterans, but helpful nonetheless for those fortunate enough to obtain one of the cottages. Many cottages were built in or near the cities of Dublin, Cork, and Limerick, as these urban areas provided the greatest job opportunities and had the greatest need for additional housing. However, the largest proportion of homes were built in rural areas throughout Ireland.

The number of cottages built varied, from a 289-house complex in Killester in Dublin to the two cottages built in 1932 on Mill Hill Rd. in Kilfinane, Co. Limerick. One of the Mill Hill cottages was granted to my great-grandfather’s nephew William O’Regan, who served in the Royal Artillery and was wounded in France.

The style of the cottages differed somewhat depending on when and where they were built. However, for the most part, they were detached or semi-detached, gable-ended, two-story houses with walls made of concrete blocks. Each had a kitchen, living room, and three bedrooms. The cottages were well built and considered superior to the standard cottages erected for agricultural workers. William O’Regan’s home was a detached bungalow with gardens in the front and rear of the property and a plot of land on either side of the house. 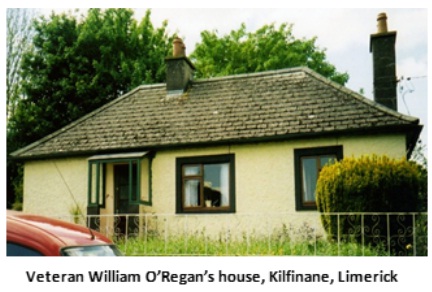 At the start of the Homes for Heroes program, veterans were required to pay rent. However, this posed a financial difficulty for many of the men, and rent strikes became common throughout Ireland. In 1931, tenants in Killester filed a lawsuit arguing that Field Marshal French’s wartime proclamation stated that ex-servicemen would be rewarded with houses, and land rents would not be required. In 1932, the Supreme Court in the Free State agreed with the plaintiffs, and thereafter no rents were collected. By 1952, tenants were allowed to purchase the cottages at a price generally in line with the original cost to build them.

Since the cottage obtained by my ancestor William O’Regan was built after the Supreme Court decision, I would assume he and his family did not pay any rent. Based on my research, I learned William and his wife, Molly Tobin, raised five children in the cottage and lived there for the rest of their lives. It was later occupied by their son Michael. The cottage was eventually sold by the family, sometime in the late 1980s.

Author’s note: More detailed information about Homes for Heroes can be found in the following: