Occupations of Our Irish Ancestors: Cooper

In James Tobin’s “Recollections of Kilfinane’s Past”, an article based on a 1983 interview, local historian Tobin said that coopering “was a great trade” and noted that many local families were “engaged in the making of butter boxes for the Central Creamery of Kilfinane in Co. Limerick.” He goes on to mention that my ancestors, the O’Regan family of Ballyroe Lower, were coopers. In addition, two of the town’s longtime residents have confirmed to me that the O’Regan family operated a cooperage on their farm in Ballyroe Lower in Kilfinane for several generations.

Learning my ancestors were coopers – individuals whose work is making or repairing barrels or casts – I began to search the Internet for information1 . I discovered how a barrel was made and the different types and uses of barrels, as well as the training a person needed to be a cooper. I was also able to get an understanding of the earlier generations’ lives. Today, beer, wine, or whiskey comes to mind when we think of things contained in barrels. But at the time of my ancestors all sorts of goods were shipped and stored in barrels.

Kilfinane, an agricultural community in the southwestern Golden Vale region of Limerick, had many dairy farmers. For generations the O’Regan family provided them with the various types of barrels needed on a farm, such as butter churns, firkins (the small wooden tubs used for butter), piggins (small wooden buckets), noggins (small wooden mugs), buckets, and wash tubs. Barrels were perfect for farmers transporting dairy products to the local creameries as barrels could be easily rolled on or off a cart; they could have wheels and handles attached to them; or they could be strapped onto a pack animal. 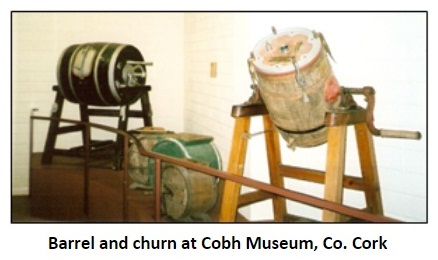 Any item that needed to be stored for a length of time would be kept in a barrel. Fragile items such as eggs would be packed in layers of straw to keep them cool as well as to protect them from breakage. A family could “refrigerate” a barrel by burying it in a stream or cool earth; cut it in half to feed or water stock; make it into a cradle for a child; or use it as a large mixing bowl or as a washtub.

Like many trades of the time, coopering was a family business, with boys trained by their father or grandfather. Coopering was a skill learned through a rigorous apprenticeship, which might take from five to seven years of back-breaking labour “at the block”, as the coopers would say.

A cooper fashioned barrels by hand using upward of thirty different types of tools. The cooper did not have precisely drawn plans or written measurements to work from; instead, everything was based on his own skill and experience. Perfection was required, as a farmer or dairyman selling his produce had to know the barrel he was using held a specific amount.

A cooper’s work was also expected to be sturdy enough to last a lifetime. The cooper marked each barrel with his initials because he could be held accountable for any financial loss, if there was leakage due to a weak joint or poor craftsmanship. More than that, since coopers like my ancestors were providing these goods to the local community, it was a matter of family pride and honour to ensure the barrels were of the highest quality. 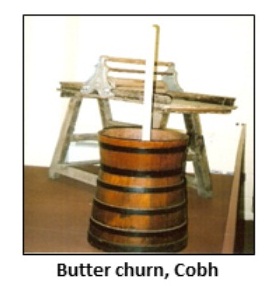 Coopers in Ireland had access to Scotch fir and oak, but more often they worked with recycled or well-seasoned timber. When making butter churns, coopers would sometimes use old whiskey barrels, as they added flavour to the butter. Selecting the right wood for the job was very important and took the kind of expertise that could only be learned from experienced artisans.

The wood would be cut into boards, fashioned into the correctly sized and shaped boards called staves for a particular type of barrel (24 to 36 staves made up the body). They had to be soaked first so they could be curved properly and then dried before the cooper could even start building. Each stave had to be shaped and tapered – smooth on the outside and slightly cupped on the inside – with beveled edges. All pieces fitting together just right to be able to hold liquids or other goods.

To keep the staves from falling apart, a cooper would first make a “barrel” that was shorter and a bit smaller in diameter than the one he was about to make. He then used this form to support the staves, placing them around the form. Iron hoops were then slipped down over the ends to hold the barrel together.

Once a journeyman cooper could craft a quality butter churn he was said to be at the high point of his craft. It was then that he earned his master cooper’s status and was able to open his own cooperage. Considering that my great-grandfather John O’Regan was about thirty when he emigrated to the U.S. in the mid-1880s, I would guess that after learning his trade at the family cooperage he decided to use this knowledge to begin a new life in New York.