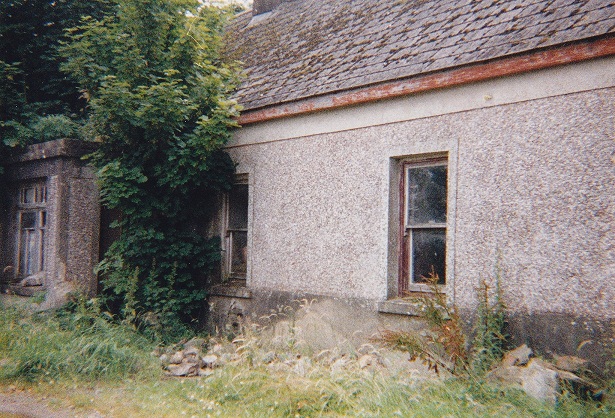 {Many thanks to Michael and Teresa Kelly, Garryarthur, for supplying the photographs and additional material accompanying this article. Michael is a grandnephew of Fr. Finn }

The name of Patrick J. Finn, Ballincurra, is not particularly well-known nowadays – and nor was it well-known in his heyday. Perhaps understandably so, for it was under two assumed names that this champion sprinter, and clerical student, won four national athletics titles in the second decade of the 20th century.

Although he was subsequently described as being variously from Mortalstown, Ballinanima, Martinstown or Kilfinane, Patrick Finn is listed in Ballincurra townland in the 1901 census:

One of his classmates here was Patrick Lyons, who, as Venerable Archdeacon Patrick Lyons of Ballingarry, Limerick, died on 1st January 1999 aged 105 years.

Patrick Finn, participating under the alias ‘P. J. Quinn’, was victorious in both the blue riband 100 yards and the 220 yards on 30th July 1911, at the Irish Athletic Championships in Mallow (under the auspices of the G.A.A). The claim that he had Mortalstown connections is sourced from this excerpt in the following day’s Limerick Leader:

This, however, is likely to be a typographical error for ‘Martinstown’; also, the taken name is spelt ‘Quinn’ in other reports. According to Tony O’Donoghue’s ‘Irish Championship Athletics 1873-1914′  [2005], and quoting Seamus O’Ceallaigh (below), Patrick Finn enrolled soon after in the Irish College in Paris, returning to the seminary in Maynooth towards the end of 1914. However, a ‘P. J. Quinn, Kilmallock’ is recorded as finishing third in the 220 yards at the Championships of 1912, and is referred to as P. J. Finn in the O’Donoghue book. So it appears the Coshlea man did return as defending champion in that year. His name does not appear in the lists for 1913 or 1914. 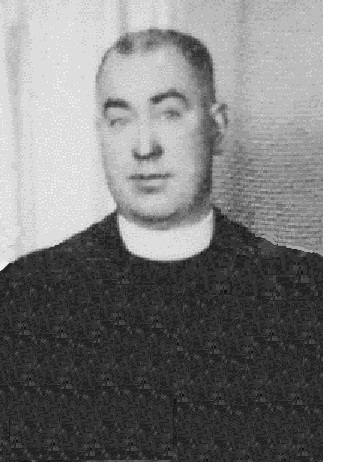 Fermoy hosted the Championships of 1915, and Patrick Finn reclaimed both sprint titles ‘showing excellent form and dash’ (Cork Examiner). The name that entered the record books however was ‘J. P. McCarthy, Kilfinane’ – interestingly, quotation marks were used even in the contemporary reports, implying that the authorities were aware that an alias was being employed. The practice of ordained clergy, and clerical students, using assumed names was reasonably common, on both G.A.A fields and in athletics, at a time when church authorities discouraged clerics from participating in organised sport. It was not until 1953 that the true identity of the winner was revealed by Seamus O’Ceallaigh, as stated in Tony O’Donoghue’s admirable volume. The full extract from that valuable Limerick Leader article follows, courtesy of Irish Newspaper Archives: 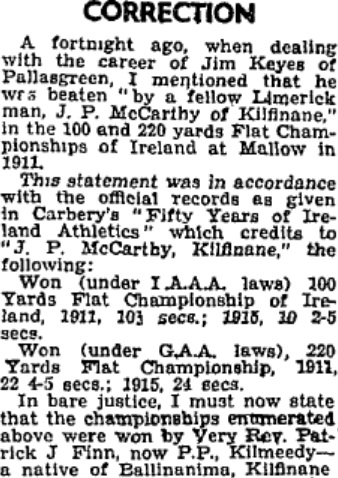 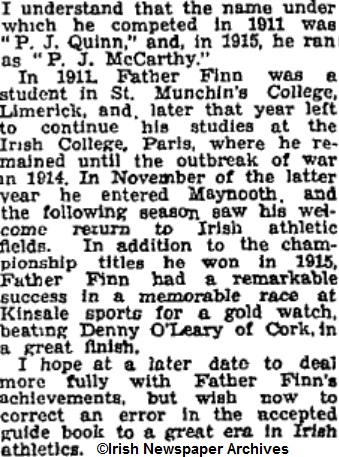 It would of course be enlightening to learn from whom O’Ceallaigh received the information linking the assumed names with the real name. This is also rather an unusual circumstance, as O’Ceallaigh is generally quite open in revealing his sources, many of whom were personally known to him.

[The contemporary reports give ‘J. P. McCarthy’ rather than ‘P. J.’ Also, it is uncertain if O’Ceallaigh did ‘at a later date deal more fully with Fr. Finn’s achievements’, but he was not among those chronicled in O’Ceallaigh’s Great Limerick Sportsmen series] 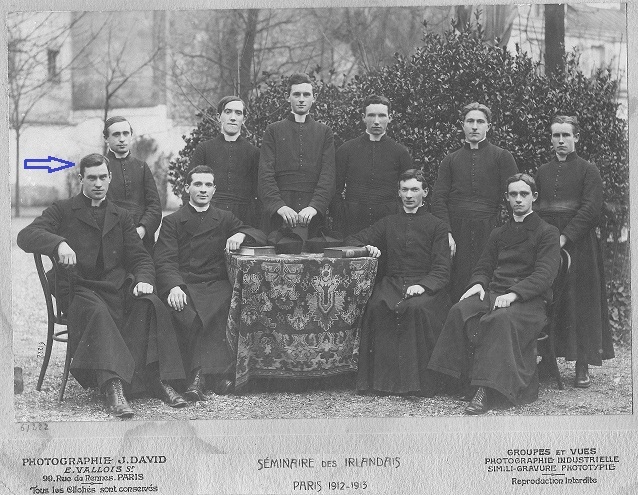 Patrick Finn (arrowed, on left) pictured with his fellow-seminarians at the Irish College, Paris during the 1912/13 term. [Full-size image]

Having returned to Maynooth, Patrick Finn was ordained on 17th June 1917; an event recorded in the archives –

and he is listed as curate of Knockaderry-Cloncagh parish from 1921 to 1924, prior to occupying the curacy of Killeedy (Ashford) for two years. In May 1926 he was appointed as curate of Athea, and on leaving that post for Coolcappa in January 1928, he received the following tribute in the Liberator (Tralee) newspaper:

Rev. Finn’s departure from Athea has caused genuine and widespread regret among all sections of the community, for it is no exaggeration to state, that Father Finn was one of the most popular curates who has ever officiated in the district. Athea parish is a very large and thickly populated one, and since many of the houses are more or less difficult of access, the duty of answering sick calls is often fraught with considerable hardship. These calls are of frequent occurrence and may be forthcoming any hour of the night a well as during the daylight, so that it requires a really vigorous and active man to cope with them. Father Finn was ever ready at the call of duty and during the two years which he spent in Athea, he endeared himself to young and old, while his simple manliness of disposition, no less than his sterling qualities as a churchman, rendered him a prime favourite with everybody.

Fr. Finn remained as curate at Coolcappa for the next 13 years. In January 1931, his mother Bridget (see 1911 census, top of page) died at home in Ballincurra, and, quite unusually, several newspapers across the Munster region carried a detailed report of the funeral proceedings. The following is sourced from the Cork-based Evening Echo – 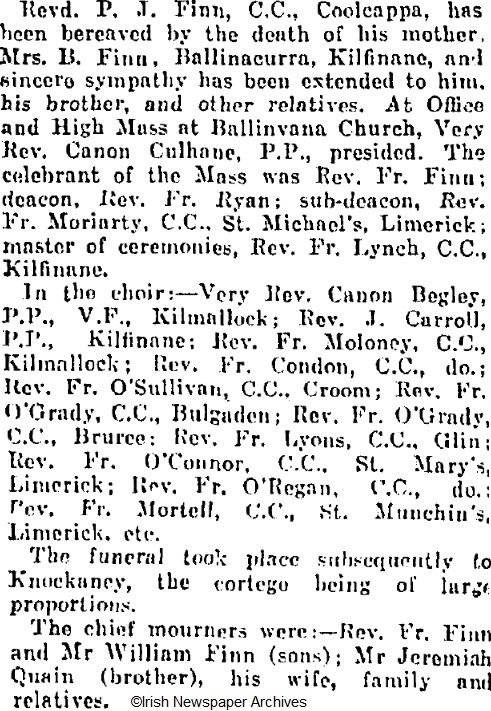 On 3rd November 1936, Fr. Finn’s brother William married Lena Kelly in Coolcappa Church. He had previously married Ellen Fahey in February 1925, but she died aged 40 in March 1934. Fr. Finn officiated at both weddings – 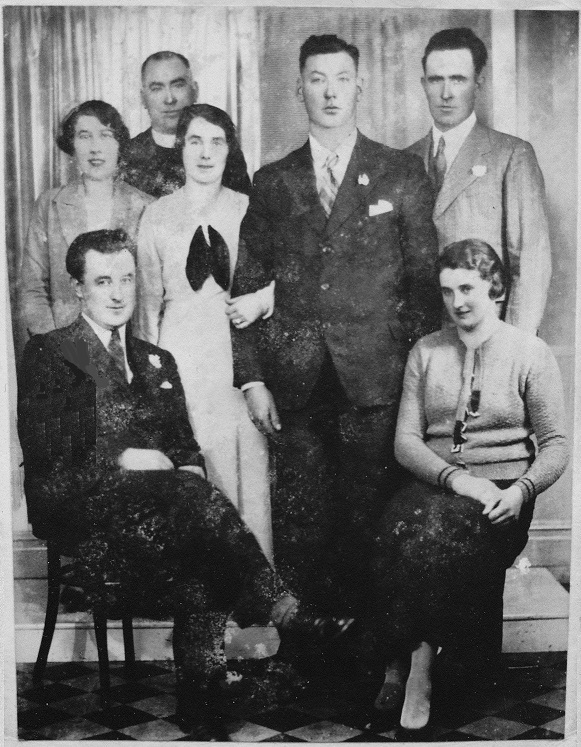 In March 1941, shortly before he turned 51, Fr. Finn was appointed parish priest of Manister, where he laboured for seven years. His final posting was to Feenagh-Kilmeedy, where he was inducted as parish priest by Canon James Wall, P.P. Croom, in August 1948.

‘Limerick Diocese has lost one of its most esteemed and respected pastors by the death over the week-end of Very Rev. Patrick Finn, P.P., Kilmeedy, who passed away on Friday after a rather lengthy illness.

Aged 72 years and a native of Martinstown, Kilmallock, deceased was educated at St. Munchin’s College, Limerick, Rockwell College and at the Irish College, Paris, where his studies were interrupted for a time by the 1914-18 war.

He was ordained in Maynooth in 1917 and subsequently served as curate at Glenroe, Athea, Coolcappa, Clouncagh, Kilcoleman and Ashford before being appointed Parish Priest of Manister. He was transferred to the pastoral charge of the combined parishes of Kilmeedy-Feenagh in 1948 and devoted the last 14 years of his religious career to the spiritual needs of the parishioners there.

In his younger days the late Father Finn was a noted horseman and athlete, and in his prime he competed at many of the leading sports meetings throughout Munster. He is survived by five nieces, including Sister Mary Borgia, Convent of Mercy, Laois, and Sister Kerinan, Birmingham.

Some sixty priests as well as all sections of public, professional and private life were represented in the very large attendance at the funeral which took place on Saturday following Solemn Office and Requiem Mass at Kilmeedy Parish Church.

At a meeting of the Limerick Co. Council on Saturday a vote of sympathy was tendered to the Bishop and clergy of the diocese as well as to the bereaved relatives on the death of the late Very Rev. P. Finn, P.P.‘ ©Irish Newspaper Archives

The Coshlea district gave forth to the world of athletics a veritable galaxy of stars in the early days of organised competition, and to that stellar band can be added the name of Fr. Patrick Finn, Ballincurra.