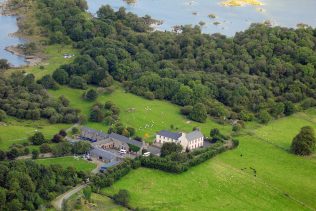 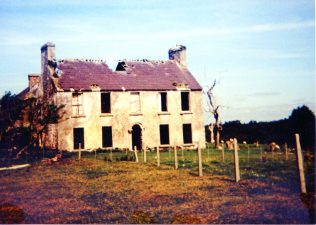 The Lynch’s of Petersburg.

The Lynch family who lived in Petersburg are a branch of the Lynch Family, one of the ten tribes of Galway.  They are related to the Blosse Lynchs of Partry and the Lynch’s of Ballycurran near Cross.  They were granted lands near Lough Mask which included  Ballynonagh Castle under a policy of “Surrender and Regrant” which forced the Irish to surrender their lands and were regranted them back only if they swore their allegiance to the English throne.  The Penal laws imposed by the English to further weaken the control of the Catholic landlords ensured that the eldest son could only inherit the entire estate if he converted to the Protestant faith.  Otherwise the land was divided equally among the male heirs, with the result that Catholic land holdings steadily diminished in size.  The Lynch family were granted lands around 1700 and it is thought that they initially lived in Ballynonagh Castle, the ruin of which still survives today.  The commenced building the “big house” using some of stone from the castle and the house itself dates from around 1715.  The estate itself comprised over 7000 acres and stretched from around the house itself to Tourmakeady.  Over time the estate was further developed and local people like Mick Canny, the last caretaker for the estate can still describe what it looked like.  The current entrance is actually the servants entrance, the main entrance went from the front of the house in a long sweep to bring out to the main road.  The land at the front formed one large field know as the ‘lawn’.  The garden at the back was known as the ‘pleasure grounds’ and comprised of landscaped flower beds and paths which enabled the gentry to walk around the grounds.  The remains of a circular summer house  and the outline of a lawn tennis court can still be seen.  The estate farm buildings comprised of sheds, stables, carriage house and grooms quarters and the bell on top of the carriage house was used to call the workers from around the estate for meals or to signal the end of the working day.