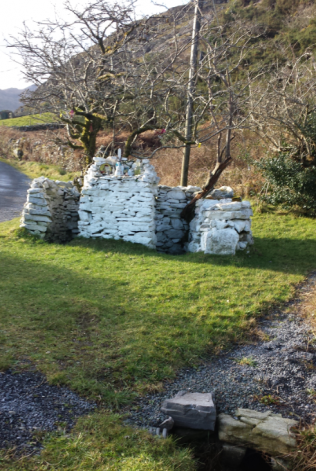 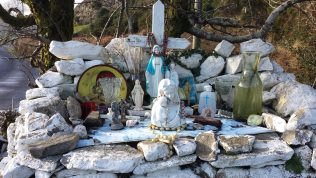 The Irish Folklore Commission (Coimisiún Béaloideasa Éireann) was established by the Irish Government, even before its Constitution  (Bunreacht na hÉireann)  was in place, in 1935, to collect the stories and folklore of the native Irish Language speakers, throughout the country.  During 1936/’38, stories were gathered in the Joyce Country area of Connemara from children attending local schools and from adults alike.  The dialect of Gaeilge is still spoken here to this day.

In the attached link, I have included folklore written by a 13 year old girl, Sarah O’ Sullivan  (Sorcha, as Gaeilge).  Sarah attended the little National School in Cluain Bruin, Dooras, Corr na Móna.  Her father Mícheál Ó Súilleabháin  (Dooras)  was married to Máire Ní Cadhain from Dooghtaknockbawn, and,  at the time of Sarah’s writing, her mother was 47 years old.  Sarah writes that she got (most) of her stories from Máire and from her (Sarah’s) maternal grandfather, Seán Ó Cadhain.

Penmanship was a subject at school in itself in those days.  Her handwriting, in pen and ink is impeccable, there are no spelling or grammatical errors, no smudges or corrections.

Sarah was born on the 6th November 1924 and passed from this life on 20th September 2008.  She married Stephen Kinneavy  (Ó Connámha),  and raised a large family, many of whom still live in Dooras today and who still speak Gaeilge fluently.