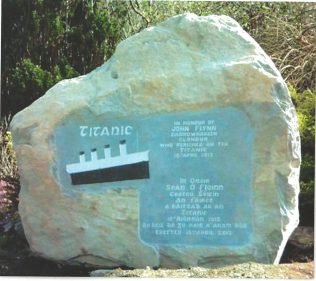 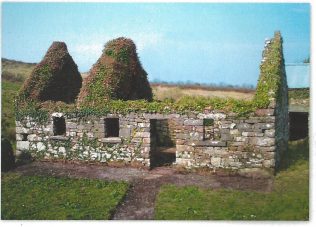 zoom
John Flynn's Cottage as it stood in 2012
Ann McGuigan

On 14th April 2012 the Centenary of the sinking of R.M.S Titanic in the North Atlantic, the Clonbur community remembered and honoured one of their own who sadly lost his life on that fateful night.

John Flynn was a native of the townland of Carrahakeen.  John was home on a holiday visiting his widowed sister Bridget. Like thousands of other young Irish men and women, John had emigrated to America to ‘seek his fortune’. John settled in Boston, Massachusetts, where he worked in the steel industry prior to opening his own business. He met and married Mary Cassidy who hailed from the Doorus Penusla, Cornamona. When John sailed for Ireland they had a family of six children ranging from 19 years to 3 years.

John spent approximately a month at home with his sister Bridget to help her on the small family farm.  After receiving a letter from his wife, he decided immediately to return to Boston. He bought his ticket in Joe Kyne’s General Merchants shop, in Clonbur village (Fair Hill House Hotel, today).  On Tuesday 9th April, John made his way to Ballinrobe where he boarded a train to take him to Queenstown (Cobh).  Along with hundreds of other passengers John boarded the ill-fated Titanic for his return journey to his wife and children.