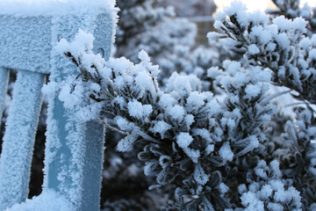 When my thoughts come ’round to Christmases of old I can still hear my mother’s voice. ‘Come on, come on, Hurry up girls and clean up that mess, Daddy will be in any minute starving for his tea and I have to finish cleaning out these chickens. Auntie Bridie will be expecting them ready for oven in the morning’.

Our large kitchen table was like a market stall, Mammy at one end preparing her fowl, the younger children making faces of disgust at the sight of wet feathers and entrails, my sister and I at the other end wading through the tangled mess of last year’s decorations. Some silver and gold tinsel had survived. There were red and green crepe paper sheets which we used to make Christmas chains,some pine cones, little boxes covered in shiny paper, the dainty little red and white Christmas stockings we knit in school. And the ones I cherished most – the fragile little baubles in purples, reds and gold.

My father was gone to Rinneen woods with horse and cart since early morning to collect enough firewood to take us through Christmas. Normally turf was the fuel of choice but for the festive season the large open hearth fire cried out for crackling chunks of wood that lit up the kitchen. Daddy was under orders to bring home a tree, holly with fat red berries and some ivy. We sometimes had to make do with a tree that was rejected by the Forestry Commission, as he was not one to waste – ahead of his time conservationally you might say! He provided the special turnip suitably cut and scooped out to securely hold the stately red Christmas candle.

The postman on bicycle, his canvas bag laden down with letters, cards and packages played a major roll in the lead up to Christmas. He whistled his way from  house to house and brought local news of births marriages and deaths and indeed the happy gossip from returned imigrants. No wonder he was treated like royalty and  offered a drop in many of the homes. He was aware too of the families who were  waiting for the American dollars to arrive. When Jim Regan in his van delivered the Christmas order there were items we only saw once a year like sherry, whiskey, something called tawney wine, YR sauce, root ginger, black treacle, Raisins, sultanas, cherries and rich red raspberry cordial for the children.

Santa always called to our village on Christmas eve and we had a custom of to-ing and fro-ing to our neighbours to see each other’s toys. The boys got spinning tops, marbles, wind up tin cars, tin money boxes and some got hurleys, sliotars, and footballs. Girls got rag dolls, jig saws, skipping ropes, and little delph tea-sets that were all too easily broken. Colouring books and crayons were in vogue too as were ludo, snakes and ladders, draughts and playing cards.