Christmas from Maree to Mali 2006 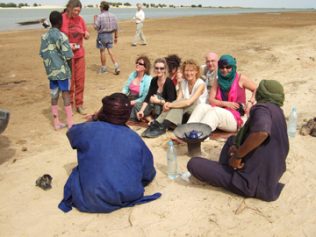 zoom
The group at the River Niger
Photo: Jacqueline McCarthy 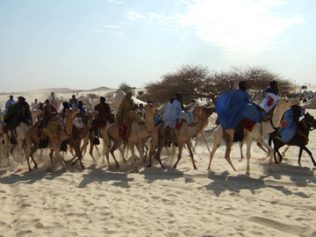 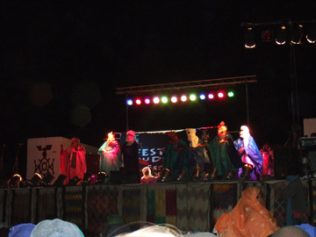 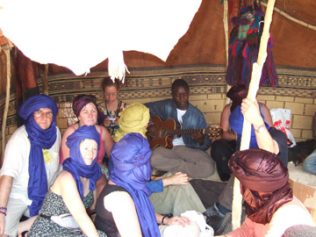 zoom
Jacqueline (back row, 2nd from left) and musicians in the desert
Photo: Jacqueline McCarthy

The lead-up to Christmas 2006 was the usual big rush, scurrying about buying last minute presents, wrapping all the gifts, hiding them, picking up the turkey, making the mince pies, Christmas carols, Christmas Day swim, drinks after in Oranmore Castle, back to the house, close the front door, finish cooking the dinner, then relax for the rest of the day.  What was unusual about this Christmas was the fact that a couple of days after, a group of us were heading to the desert to a music festival in Estican, Mali, West Africa.

Festival au Desert was organised by Mali people absolutely in the middle of nowhere, surrounded by sand, tents and African music.   The closest big town to Estican, is Timbuktu, where we all stayed on our voyage. I always thought Timbuktu was a fictitious name.

Our journey began when six of us musicians, Elizabeth Healy our wonderful Irish organiser, and her close friend Cathy, arrived in Mopti Airport. We travelled in two Land-Rovers with mattresses on top, crossing the desert for five days, stopping overnight in various villages in so-called hotels or tents.  We were brought to villages every day to eat in ‘restaurants’, and usually after waiting maybe three hours while the goat or lamb was killed and cooked, we either had goat or lamb curry/stew and rice. Never vegetables. We all felt really uncomfortable arriving at the restaurants, because as we approached the entrance the villagers gathered around us begging for food for themselves and their children.  It was a terrible situation and really made us feel guilty.  The villagers must have been able to smell the food from outside which would have made matters worse.

We travelled like this for eight days until we eventually reached the Festival au Desert.  The air was dry and still, and sand became suffocating after three days.  The stage was erected especially for the event, but normally there was absolutely nothing here only sand, sand and more sand.

Our accommodation at the Festival was a fifteen-by-fifteen-foot white canvas tent, which accommodated four of us.  We were surrounded by the women from the Tourag tribe who have a very unusual way of singing that comes from the back of the throat.

We were the first Irish musicians to play at this amazing festival which was a real privilege.  The opening ceremony commenced with an amazing parade of at least 400 camels with tribal men on their backs, galloping around the festival area.  The colours were absolutely beautiful, the Tourag tribes, the pale blues, the primrose yellows, the pillar-box reds, the emerald greens.  This very, very, special ceremony would have appeared exactly the same 500 years ago.

People travel to Estican by camel, some walk, walking for weeks, others travel like us in jeeps.  We passed these nomadic tribes on our journey with their donkeys, goats, dogs, camels, and children, dressed in the beautiful colours, tall and elegant.  We wondered where they had appeared from. There was absolutely nothing for hundreds of miles.

Amongst the African bands we eventually played our traditional Irish music to a very attentive audience.  They had never heard our type of music before. They loved it, they really loved it.  One man in the audience in all his traditional gowns shouted up, “Very, very, very, good”. We think he had just a small bit of English, he kept repeating this.  The sound of African drums could be heard for miles around, beautiful as it wafted through the stillness of the dark, warm, evenings.  People sat around campfires outside their tents singing and playing African music.  The local Mali music has a very distinctive sound - a fairly high-pitched watery sound with a lot of guitars, harps and drums. It is probably one of my favourite types of music.

This whole trip was an amazing experience for all of us and a complete contrast to one week earlier when we were caught up in the Christmas madness: these people didn’t know what Christmas was.  One of my strongest memories was the time we were waiting for the ferry to cross the Niger River, a young boy of about fourteen attached himself to us, he seemed to be fascinated by the colour of our skin, and what we were wearing.  His family must have been nomads, as they were living in tents at the riverbank.

I was amazed at his clothes, he was the same age as my son Pádraic who had just turned fourteen, and who a few days earlier had received an Adidas tracksuit, and Adidas hurling shorts for Christmas. Cool.  This young boy was wearing pink nylon knee-high Barbie socks and purple plastic sandals just like the ones we used to wear as children to the beach, he obviously received these from the West.  His face was lovely, he had sad loveable eyes, and a regal look, I thought if he was in the right place he would have been a prince. He adored every move we made.  I couldn’t help comparing him to my son Pádraic who had just celebrated all the joys of Christmas, and this lovely innocent boy was oblivious to the whole festive season.  I wondered what the reaction would have been like if Pádraic had met this young man. Pádraic would probably have handed him a hurley and showed him how to play.  Of course there would have been a language barrier, as in Mali people speak French, but I think they would have connected very well.

The journey to the Festival au Desert will remain in my memory forever and the huge contrast from our hectic and commercial Christmas season.