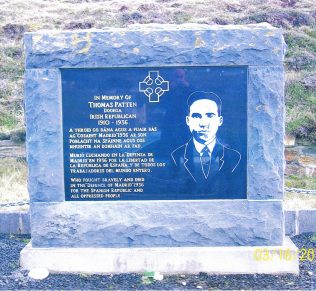 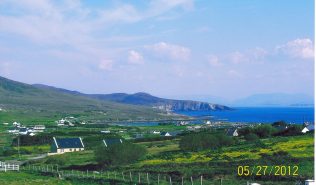 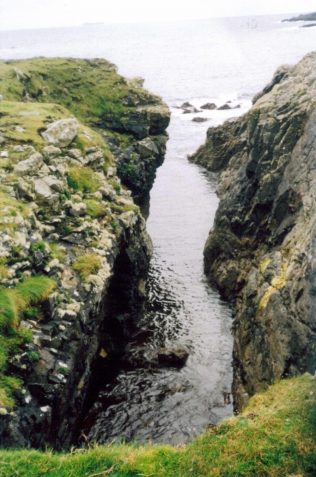 zoom
Sea Inlet on the Road Between Cloughmore and Dooega 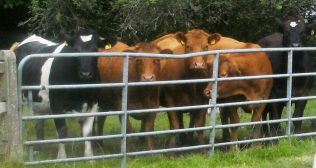 Dooega is a small village on the west coast of Achill. It has a population of around 150 people.

A number of books have been published that refer to the Colony in Mweelin. Mweelin is east of Dooega along the Minaun Mountain. One of the books is called Edward Nangle The Apostle of Achill. It was published in 1884 in London. It was written by a man called Henry Seddall who was wrote about Edward Nangle, a Protestant clergyman who set up the Achill Mission in Dugort. He set up a smaller Colony in Mweelin. The Mweelin Colony was seven miles east of the Dugort Colony. In September 1851, the Achill Missionary Herald reported that the Mweelin Colony contained, a rectory, a church, a steward’s house, a long row of cottages, in all eighteen families, a school, a college and a teacher training house. Today you can see the ruins of the “university”,  the college, and some of the cottages. Another book partly about the Mweelin Colony was written by P.J.Joyce. A  Forgotten Part of Ireland was published in Tuam in 1910. It includes details  about Edward Nangle’s life and his two Colonies in Dugort and in Mweelin. P.J.Joyce was from Philadelphia, U.S.A. The book Boycott, by C.A. Boycott also mentions Nangle’s Colony at Dooega.

There is a monument erected near Dooega Beach in memory of a man called Tommy Patten from Dooega. He was one of 14 in his family. At the age of 26, he  went to Spain as a volunteer and fought in the Spanish Civil War. He died in Madrid in 1936. The poet John F. Deane wrote a poem about Tommie Patten called “Revolution”. It is published in The Stylized City. The writer, Peadar O’Donnell, who used to visit Achill often, dedicated his book, Salud, to Patten.

Mary Anne Lavelle née Masterson was born to Brian and Sabina Masterson of Sraheens. She attended national school but not secondary school. After school she would bring the cows down from the mountain with her brother, Michael Masterson (R.I.P), and her sister Annie Gallagher née Masterson, and milk the cows and then watch them for the evening. In the morning they would put them up the hill again.

Mary and her siblings were not allowed to go to Scotland because their mother would be alone as their father was away working in England. When Mary was 15 she started working for Ms. Hunt, a wealthy woman from Achill Sound. On a Sunday after mass and into the evening they had benediction, after that they might go to the dance in Saula. Later on when her brother Michael opened a shop she had to work there for three years.

Then Mary married Michael Lavelle of Meelan, son of John and Bridget. Michael worked hard in the pub (Mickey’s Bar) and with his cattle. He and his tractor were always on high demand as he was the first man to have a tractor in Achill and he also went fishing in his half decker boat, “The Mayflower”. Mary gave birth to her first child, Josephine, in 1955, and had another five children, Declan, Martina, Gerard, Michael and her youngest, Denise. Mary worked hard in the pub during the summer and would send all the children to Granny Bridget in Meelan. Mary lives in Dooega still but her husband died in 2006.

Long, long ago, there was only one graveyard in Achill, at Kildownet. People who died in lower Achill were carried along the old coffin trail to be buried in the graveyard.  As you near the start of the old coffin trail in Dookinella the body of an old sailor is buried nearby.  You head up the mountain towards Dooega Church. From the  church you head  towards Ashleam and on to Gorry’s Road.   There are some people buried  along the way.  I have passed three times where they are buried  and put three stones on their graves.  You then near a stone quarry. Very often the people carrying the coffin got tired and buried the dead  along the way. They built up piles of stones to show where  the  people were buried. On the Dooega side of the quarry there are many stone piles like this.  From the quarry  you head down through  it,   onto the road,  and back to the old graveyard where  the old church was. There mass was said for the dead, and they were  buried in the church yard.

Maggie was born on 29th July 1917, to Pat Patten and his wife. Maggie had 8 siblings and lived next door to her cousins, Sandy, John “The Yank” and Martin and their dad Manus. Manus’s wife died and Maggie’s sister Mary died (due to being scalded by boiling water) in 1918. When Maggie was 3, her mother also died, so Maggie’s Aunt Mary raised Maggie’s family and Manus’s family under the one roof. Aunt Mary was an extraordinary woman who never married, fished with the men and was very strict with the children. Aunt Mary’s first language was Irish but she made sure the children spoke English. When Maggie was about 8 years old, the Congested District Board divided the land of the local landlord, Carr, so Maggie’s family moved to Maoileán, just two miles away.

The diet of Maggie’s family consisted of potatoes, salted herring (a type of fish), winkles and limpets. Maggie’s family had two cows called Peggy and Eilish and also a donkey who took the turf from the bog. Maggie’s family grew turnips, rye, cabbage and onions along with potatoes. Their house was very basic, no running water, a stone floor and a thatched roof. The children played games, Jacks and Chickens. Chicken’s was a game where you murdered the person who murdered your chicken. The village had a very large young population and while very poor, Maggie had a happy childhood.

Maggie went to school in what is now today Dooega Church. There were three teachers in the school, Ms. O’Malley from Ballycroy and Mr. and Mrs. Murphy from Roscommon. Maggie learned how to read and write, but little emphasis was placed on Irish. Maggie finished school in 6th class at the age of 14.

Maggie’s sister, Cathrine, worked in Scotland at age 11, but Maggie, being the youngest in the family, did not go to Scotland until she was 18. Maggie left Achill by train in 1935 and went to work in Ayreshire. She lived in a barn for cows and slept on a straw mattress. She had very poor living and working conditions. Her gaffer was Johnny Lavelle, a kind man. There were many dances between the different bothies.

Tommy Patten was the first Irish person to volunteer to fight in the Spanish Civil War. Tommy was Maggie’s first cousin. In the war, Tommy fought against Franco, the Spanish President. Maggie described Tommy as “a Fianna Fáil man who had strong views”. Tommy took his niece to live with him when her mother died, despite the threat of legal action.

Maggie tells stories, here are only a few…..

When the River people came over the mountain to work on the land, they were given a turnip as payment.

Tommy Patten’s ghost appeared to Sandy and his sister.

Visiting was a very popular pastime.

Maggie is 97 years old. She bakes brown bread every day and has excellent memory and health. She lives in Dooega and her daughter Ann shares the house with her.

John was Maggie’s first cousin. He was born into poverty, but went to America where he got work as a train driver in the New York subways. John invested his money wisely in a little known company called Apple. John died a multi-millionaire.