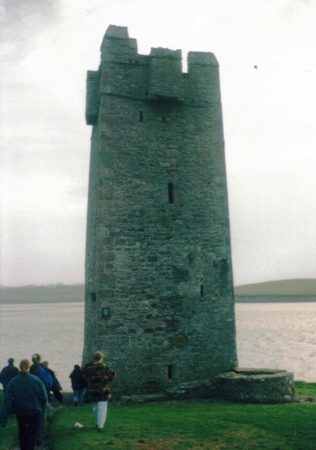 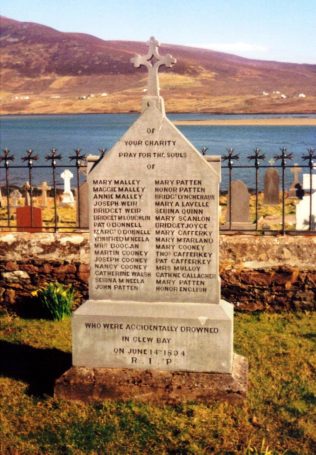 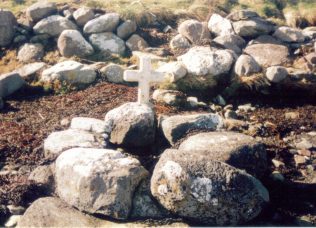 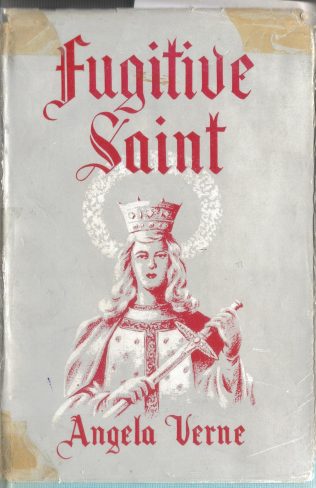 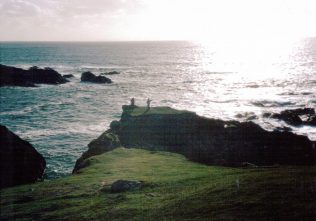 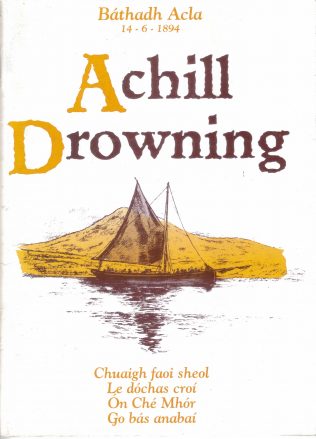 Cloghmore is a village located in the south of Achill Island. It has a good lot of writing associated with it.

Kildownet Castle is a tower located in Cloghmore near the pier. It once belonged to Grace O’Malley (Granuaile). It features in many books or biographies about the life of Grace O’Malley. One book is Pirate Queen which was written by Morgan Llewyln,  a well-known children’s historical fiction author. Another book is Granuaile by Anne Chambers. It gives a more factual account and focuses more on Granuaile’s life as a chieftain and pirate.

There are also books written about the story of St. Dympna. She was the Princess of Oriel (a kingdom in Ulster). After her mother died her father proposed marriage to her. Shocked by the idea of incest she fled the kingdom. She travelled the country fleeing from her father’s men. Eventually she came to settle in Clouhmore, where she later founded a church. One  book written about her is Fugitive Saint, by Angela Verne, and there is a chapter about her in Praying With Celtic Holy Women, by Bridget Mary Meehan and Regina Madonna Oliver.

Honor Tracey is a writer who was born in 1913 in Surrey, England. In the 1950’s she moved to Cork. In local news and media she criticised the Catholic church. This made her unpopular with the locals who led a torch lit procession to her house. She eventually left Cork and moved to Achill. She bought a house in Kildownet. The people and landscape of Cloghmore inspired her for some of her books including the well known Straight And Narrow Path. She left in the 1980’s and is still remembered by the people of Cloghmore as a kind and charitable lady. Her best known book is Winter In Castille.

Achill Drowning is about the Clew Bay Drowning Tragedy that happened in 1894. Many Achill people were lost in the drowning and they are buried in Kildownet Graveyard. Two Cloghmore people, Anthony Kilbane and Mary Jo O’Keeffe, contributed to  Clew Bay Folklore by the Mayo Folklore Project. Noírín Anne Gannon, from Cloghmore, has written two books of poetry, Verses by Twilight and Words from an Island.

Derreens is located between Achill Sound and Cloughmore. A booklet called Taispeánta Caorach Acla was published in 2011 about the Achill Sheep Show which takes place every year in Dereens when many farmers come to present their livestock to a panel of judges.

In 2011 a booklet was also published about the church in Dereens for its fifty years anniversary. It contains a lot of information and photographs of the events held in it over its fifty years of being an active church. It was renovated in the mid 1980’s.

Kildownet is a cemetery located five miles from Achill Sound. It is most known for hosting the mass graves of the Clew Bay Disaster and the Kirkintillock Fire.

The name ‘Kildownet’ is derived from the Irish words ‘Cill’ meaning church and Damhnait, or Downet, the name of the 7th century Saint Dympna. She is the patron Saint of those undergoing mental stress or anxiety. Her feast is on the 15th of May.

Dympna’s story begins in the east of Ireland in the Kingdom of Oreil, where Damon, her father, ruled. Damon loved his wife and on her death he was overcome by  great grief. He turned his attention to his daughter whose beauty reminded him of his wife. Plotters urged him to make his daughter his queen.

The priest Genebrard intervened to save Dympna from this plot. Through the night, they fled out of Oriel. They hid in the west of Ireland for some time but they were forced to flee to Belgium. Eventually Dympna  was caught and martyred. Her relics are preserved in a shrine in Gheel, Belgium.

Today, the custom of curing the mentally ill continues at Gheel in memory of Saint Dympna.

Tradition says that Dympna sought refuge in Achill and stayed here for some time. It is also said that she built a church here. The ruined church in Kildownet cemetery is unlikely to be Saint Dympna’s church. However, it may be the ruin of a church built on the original site of her church.

In the old cemetery there are two war graves, one unmarked and the other goes as the resting place of a F.G Wheeler. Both were sailors on board the ship, HMS Mashena when it was sunk by the German Luftwaffe, after sinking the Bismarck. F.G Wheeler and the unknown sailor were washed up here. They were numbered among the 35 that lost their lives.

In 1894 a great tragedy occurred. A group of harvesters, mainly from Achill, were preparing to go to Scotland to pick potatoes. They were on a hooker when they reached Clew Bay and saw the giant ship that was to take them to Scotland. When they saw it,  they all rushed to one side, causing the ship to capsize. All fell in and the sails prevented some from reaching the surface, therefore drowning them. Altogether 30 died, marking the first tragedy to hit Achill. At that same time the train to Achill was about to be opened, but because of the disaster, the line was  opened early to transport the bodies back to Achill. The victims are buried in a mass grave in the old cemetery.

Forty three  years after the Clew Bay Disaster, another tragedy occurred when 10 boys were killed in a random fire that happened in the shed they were sleeping in,  in Kirkintillock,  Scotland. They had gone to Scotland, as was the practice for many people in Achill at the time, for the annual work to be got picking potatoes.  The last train from Achill took the bodies to Kildownet. They are also buried in the old cemetery.

The location of a holy well on the seashore outside the boundary wall of the cemetery is an indication of the locality’s link with Saint Dympna. Holy wells and devotional practices associated with them usually pre-date church buildings.

The Lost Garden, the novel by Kate Kerrigan, published in 2014, was inspired by the Kirkintillock Fire Tragedy.