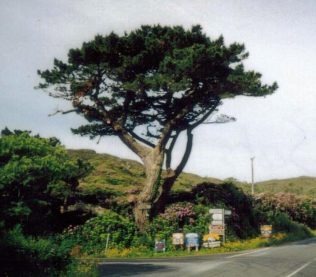 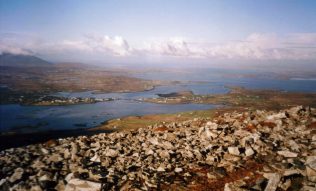 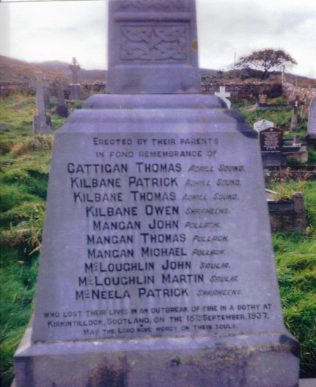 This area has inspired many writers. Mark F. Chaddock is a poet who emigrated from England to Achill Island and now lives in the area. He wrote about the “New Michael Davitt Bridge, Achill Sound” in his book called Ordinary Miracle. Tom McSweeney wrote about local fishermen in Seascapes.

Kieran Waldron has a chapter about Scoil Damhnait in his book called Out of the Shadows. Scoil Damhnait was the lay Catholic school in Polranny, between 1948 and 2011. Two students from Scoil Damhnait – Orla Cafferkey and Hessel Van Goor – had stories published in Shooting from the Lip (ed. Re O’Laighleas) in 2001. Michael Davitt Park, Achill Sound is a booklet for the opening of the football pitch at the Sound on May 6th, 1979.  Many people took the train from Achill Sound when they were emigrating to Scotland and England. Achill Island Tattie-Hokers in Scotland and the Kirkintilloch Tragedy 1937, by Brian Coghlan, is about the Achill people who died in a fire tragedy in Scotland. Their bodies were brought home to Achill by train and then they were buried in Kildownet.

Saula is a village near Achill Sound. Chris McGinty from Saula, and Sean Grealis from Dooniver, wrote a book called The Scanlon Cup, 1954 – 1995. It is about the local gaelic football club competition, “Achill’s All-Ireland”. Scoil Náisúnta Naomh Pádraig Sáile 1910 – 2010 is a book published to celebrate 100 years of Saula school.

The villages of Sraheens and Bleanaskill are located along the Atlantic Drive between Achill Sound and Cloghmore. Galloway Street, by John Boyle, is about growing up Irish in Scotland. The author often visited his aunt Mary in Sraheens when he was young. Alexander Williams was a landscape and marine painter. He lived in a house in Bleanaskill. Gordon T. Ledbetter wrote a book about him called Privilege and Power: The Life  and Times of Irish Painter and Naturalist Alexander Williams 1846 – 1930.

Catherine Seoighte was born on the 25th of Feb., 1953. Her parents were Padraic Seoighte and Mary Gallagher. For the first 6 years of her life Catherine lived in Currane with her parents and sisters Maire and Anne. Then Catherine and her family moved to Polranny where she is currently living. When she moved to Polranny she had another siblilng, Micheal. In some of the years that followed she got 4 more siblings, 3 sisters Nora, Gráinne and Méadhbha and a brother, Piaras.

A Story of Bad News

My grandfather, Pádraic Seoighthe, was born in Mewillian on the 21st of February, 1920. He was the eldest of eight children. He trained as a primary school teacher and was appointed principal of the Valley N.S. in Achill in 1942. In 1941,  Pádraic, along with brothers Jimmy and Paddy Scanlon, made an effort to organise an official Achill GAA Club and contested the West Mayo Championship, which they won in their first year and with a team in which Pádraic played full forward.

The team got permission from the O’Malleys, who owned Óstán Oileán Acla, to use their field at what is now Davitt Park, to play their matches. One of the players on the 1942 team, John Cooney, is still alive today. After World War Two and for other reasons, there were massive player shortages throughout the county. Pádraic, Seamus Daly from Mulranny and Denis Gallagher of Currane came together and formed a team with players from Mulranny and Achill and entered the West Mayo Championship under the name Mulranny. The team then won the Junior championship.

A school sports competition in which Pádraic had a vital role setting up started in 1948 to ensure young lads’ participation in GAA , as was the Scanlon Cup, set up in memory of the Scanlon brothers and played by the teams of the different Achill areas; Currane, Achill Sound, Kildownet, St. Vincents, or, Saula, St, Josephs, which was the Valley and Dooniver, and St. Pats, Dooagh.

In 1948 Alice’s field, owned by O’Malleys, was sold to the club for a nominal price. The money was made by fundraising in London as there was no money in Achill at the time. Development of the pitch was started in 1977 and two years later a move was made by Frank Moran of Cloughmore to get the name changed to Davitt Park, a name which still stands to this day. Pádraic Seoighthe served as club secretary from 1953-1965 and club chairman from 1973-1987. He was registrar for the Mayo County Board for a time as well. Pádraic was the president of the Mayo Minor Board from 1980-1985 and was a selector on the 1978 Mayo Minor All-Ireland winning team which included Achill men Kieran O’Malley and Seán Warde. Kieran O’Malley won Goal of the Season that year and Seán Warde won Save of the Year. Achill Minor teams used to play for the Pádraic Seoighthe Memorial Cup but not anymore. Pádraic Seoighthe will always be remembered for contributing a huge amount to Mayo GAA and Achill GAA.

St. Patrick’s School, Saula, is a small school in Saula, Achill. Co.Mayo. Saula National School was opened in 1872. It was a very small, one roomed school. The pupils had to sit on the floor beside a fire. Each pupil was made bring in one sod of turf each day for the fire. The remains of the school can still be seen today.

There were one hundred students attending the school when it first opened. Forty of them where first cousins. They were from the Patten family. The school had no electricity and the pupils had to go to the toilet outside as they had no bathrooms in the school. The pupils played in the fields around the school as they had no playground.

They wore very basic clothes to school every day as most of them only had one set  of clothes. Most of the boys wore shorts and a jumper and most of the girls wore a basic dress and cardigan. The students walked to school and most of them didn’t even have shoes until they were about eight or nine. They did not have roads like today either. There were no school lunches. The students brought a little bit of spare bread if they had any at home.

The teachers from 1917 to 1931 were Bridget Mc Nulty and Mary Anne Gallagher. The principal  at this time was Frank Moran. In Saula School the pupils learned both Irish and English. They also learned a lot about religious education and had to learn a lot of prayers. Once a month they went to school mass at the Sound Church. Every year the Inspector came  to inspect the school. School started at nine and ended at three. The children left school at about fourteen years of age.