Ballycroy is located in the west of Ireland. It is reached from Achill by taking the N 59 before Mulranny. It has wonderful scenery and has inspired many books and poems. Mark Chaddock  wrote a poem about Ballycroy entitled “This Place: Ballycroy”. It was included in his book of poetry The Ordinary Miracle. J.M. Synge wrote a play while staying near Ballycroy called The Playboy of the Western World. Another writer inspired by Ballycroy was W.H. Maxwell. He visited Ballycroy to collect information for his book Wild Sports of the West which was published in 1832. Paul Henry was an artist from Belfast who lived in Achill for a time from 1910 – 1919. He  enjoyed the scenery in Mayo and became “paymaster” for Ballycroy, Bangor Erris, and most of the Peninsula of Killala. He wrote about his time in the west of Ireland in his book An Irish Portrait.

Agnes Wallace was born in Ballycroy in 1936 and was the eldest of nine children. Agnes’ Granny, her father’s mother, lived with them until she died at 95 years of age, when Agnes was 14.

When Agnes was young there was no electricity or running water and money was scarce. Most of the food her family had come from their farm, where they grew their own vegetables. Agnes remembers her mother making the butter in the churn. All the cooking in the house was done on coals on the open fire and bread was baked on the hearth on the open fire. The children went to the well for water and brought it back in buckets or cans. If they wanted hot water they had to boil it over the fire. They washed the clothes in the tub with a wooden washboard. There was no washing powder, only light soap.  Paraffin oil lamps lit the house and the open fire was lit day and night. 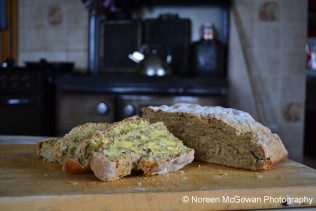 Neighbours often visited the house. Storytelling was a very popular pastime. Often if a good few people brought instruments like accordions or fiddles, a dance would be held. Agnes’ family only had one horse, so when the fields needed ploughing, the neighbouring family would bring their horse and lend a hand. Then, Agnes’ family would do the same. 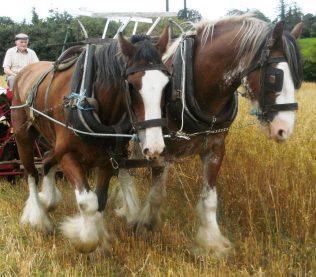 The children had to walk three miles across the fields to get to school, whether it was wet or dry. If you were late for school, the teacher met you at the door and gave you four slaps on the hand.

Agnes’ first job was in Moran’s Guest House in Mulranny, where she worked for “a wonderful woman” who  taught her everything she knows about cooking. In 1958 she came to work in Sweeney’s as a cook in the staff house (where the drapery is today.) She worked there for three years, then moved to Castlebar. She returned to Achill in 1968, when she married Patrick Wallace of Leenane.

Statue to Our Lady

Agnes tells how Fr. James Kelly, a post P.P of Achill, had a great devotion to Our Lady and wanted to build a statue in her honour. He achieved this when a lady arrived from America on a visit to Achill and donated the money. The statue was erected on Minaun, free of charge, by a contractor working in the area. The rosary is recited at the statue every year on the 5th of August. The original statue unfortunately wore away, but it was replaced in the last number of years.

Agnes now lives in Achill Sound and has one child and one grandchild. She is my granny and an inspiring person, who will always be a Ballycroy woman at heart. 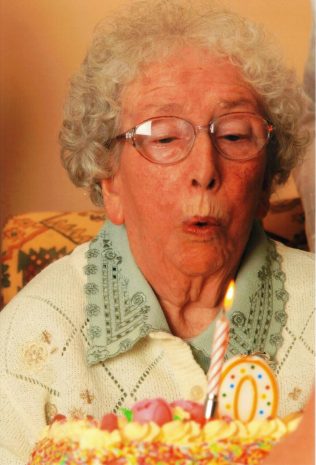 Nora McGinty was born on the tenth of September 1920. She is now ninety one. She was born to John Doran and Mary Doran (née McManamon). She was the youngest of four children. She had two sisters and one brother. Her father died when she was five and left them poor. They lived on a small farm in Dooriel in Ballycroy. They sold their cattle to help provide for themselves as they struggled for many years. They then decided to move to Manchester when Nora had received her primary education in Drumslide National school in Ballycroy.

When they arrived in Manchester, family members had got a house for them. After the first week they all got jobs. Nora’s first job was in a small café. She said they made all their own bread and cakes there but the pay was very little and she had to look for another job. Her next job was working in an ammunition factory where the pay was much better. They made the bombs by hand. She said they made two an hour. They packed the bullets into boxes of twenty. They worked long hard days. They were many people working there, more men than women and people of all ages. She worked many long hard hours so she could save some money and return to her farm in Ballycroy.

She finally returned to Ballycroy when she was twenty three leaving behind her mother and three siblings. When she returned to Ballycroy she moved into the old house and started up the farm again. After a few years she met my granddad Pat McGinty and they then got married. Pat was also from Dooriel. They had eight children, five boys and three girls but sadly two of their sons died, one when he was a baby and the other when he was eighteen, in a car accident.

Nora’s husband, Pat, had to leave for England and only came home at holiday times. Nora worked very hard, looking after the children, the farm animals and sowing crops so they had enough food to eat. Pat always came home to cut the turf and the children would help her save it. In the winter time she taught herself how to knit and crochet and she became very good at it. She then got a job working from home crocheting hats and knitting Aran scarves and jumpers for Carraig Donn and a factory in Carrowtige. That provided for them. Pat then came home and retired but he was in bad health at that time. All Nora’s family emigrated to Manchester except for my father who stayed at home to look after the farm with my granny.

Our house is now the third house on that land since my granny was young and our family are the next generation to live there. My granny also lives with us as she is not able to look after herself any more. She worked hard all her life and now it’s our turn to look after her!!!!

My grandfather, Patrick Conway,  grew up in Ballycroy. He said they always got up early when he was younger, even on the weekend, they would always be up around half past seven to do whatever work needed to be done. Then they would walk three miles to school in rain, hail or snow. Then they would walk home again and be encouraged to eat their dinner quickly so they could get outside and do their work. Usually it would be collecting cows or digging potatoes; in the summer they would be on the bog. He also remembers that his mother used to go over the road visiting another house.

He said that there was no radio or television so it was hard to entertain yourself. Sunday would be their day off, they had no work and they would dress in their good clothes and wear them all day. Sometimes on Sundays they would cycle to the football pitch to watch Ballycroy play. He also remembers they used to play games like blind man’s buff. They would get shoes in September and had to make them last all year because their parents would not be able to afford new ones. 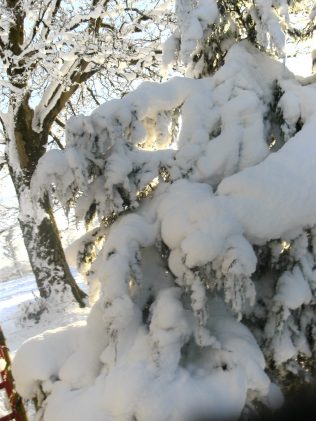 He remembers a huge blizzard that happened in 1946 or 1947. He remembers that it lasted two weeks and when they woke up in the morning the first day the snow was as high as the house. There were very few cars then because they were very expensive. Postmen had bicycles. The post would come to the crossroads near the school and they would have to walk down to collect it. 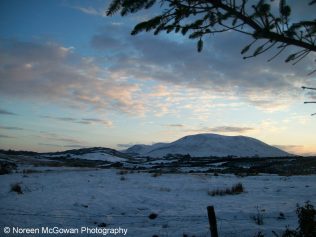 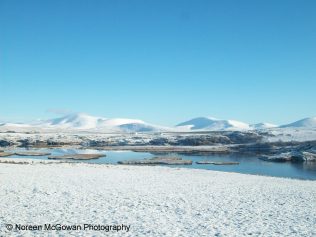 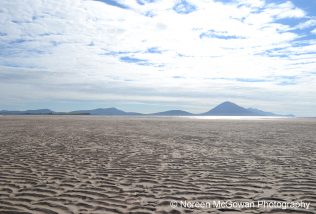 The Park is open 7 days a week. It has  a visitor centre. You can walk all around it and see the wonderful scenery. There is also a tearoom called “Ginger and Spice”  which is open daily.

When I go to Ballycroy National Park, first I go into the visitor centre where you can learn about the heritage, agriculture and bogs of the area. There is a replica of an old family cottage which shows how people lived many years ago. There is also a model of a currach boat. Then I go on the walk which goes all around the hill where the Centre is located. You can go to the top of the hill and look across at the mountains that surround it. Then I go into the tearoom for some lovely food.

You can read more about Ballycroy National Park at: www.ballycroynationalpark.ie