Building a bridge into Shrahorick 1938 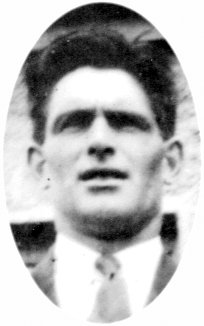 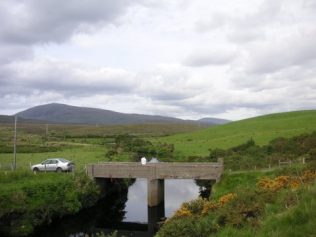 zoom
The Bridge into Shrahorick/Newfield. Tiernaur, Co Mayo. Before Patrick and his colleagues built this bridge the local villagers used stepping stones to cross the river.
Author, Personal Collection 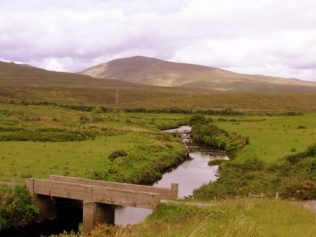 zoom
The Bridge is erected over the Abhainn Garbh River, it now leads on to the famous Great Western Greenway
Author, Personal Collection

Patrick McManamon, born in 1904, was the fifth child and only surviving son of Michael McManamon and Mary (nee Ryder) of Shrahorick/Newfield. Tiernaur, Co Mayo.

In 1938, Patrick, along with John McLoughlin, a local man with some house building experience, took on a project to build a bridge across the Abhainn Garbh River, which is approx twenty-five feet wide. A bridge, of approximately thirty-five feet in length and ten feet in width, with supporting sidewalls that sit down into the water, and a central support pillar. The floor of the bridge is flanked by 3’.6” walls, with holes at the bottom to allow water wash over it in a high flood. This bridge accommodates cars, tractors and trucks. It has also withstood the force of many floods and quite a lot of vehicle and pedestrian traffic in the intervening years and still stands in perfect condition – a great feat of engineering for two young men who had no experience of bridge building and stands as a testimony to excellent workmanship.

Before the bridge was built, Patrick, his parents and nine siblings, one of whom was my mother, had to make do with crossing the river by stepping stones, which was the only access to the main road from the family farm in the valley where they lived. All of them left home to work in either the USA or England, via these stepping-stones.

As a child, I crossed the bridge at least twice every day, except when extreme floods washed over its floor. I never gave any consideration to what life would have been like without that bridge. In later years, the stepping-stones served as a great novelty for nieces and nephews visiting from London and as young teenagers, my sisters and I often lay across them to wash our hair – but – practical they were not, when it came to going out.

My mother related the process to me as follows:-

“Patrik and John McLoughlin sat on Chapel Hill (so called beause the chapel was on the other side of it) for three weeks, overlooking the river, viewing it’s flow, depth and behaviour and discussing all possiblities for the most suitable site for a connecting bridge to the McManamon farm.  Some of the many factors many factors to be taken into account were the variants in water levels – a shallow place had to be found and the lie of the land on each side had to be considered, to accomodate connecting roads at each end of the bridge. The place where the bridge now stands was eventually deemed the most suitable.

The old stepping-stones crossed the river, at a point a little further up stream, which led to a path much higher up on Chapel Hill than the present one, now in use. Regular floods meant we were often marooned when the river level rose and covered the shallow steps.

Preparations for this mammoth task began – the river had to be diverted from side to side, while the foundations and sidewalls were built. To install the central support pillar, the river had to be split in two with rocks and earth to create a dry area in the middle on which to work. The next step was to lay down the floor of the bridge and finally the sidewalls were built and capped. All the work was done with shovels, spades and ladders. The timber casing to hold the foundations, sidewalls, central pillar and parapet was kindly loaned by the Stoney family from Rosturk castle. The gravel for mixing with cement was brought from Moynish Island with your Uncle Patrick’s pony and cart. They bought the cement in Westport and got a deal, as they bought bags which were burst.

Neighbours gave of their time, helping out with labour, particularly Martin Caine, who lived next door, and he too needed the bridge to access the main road.

The Power of Prayer

Your Granny started praying for dry weather, in order that there would be no floods, as the equipment and tools being used were very primitive by today’s standards. The sort of floods that we got in that river would have swept away all diversion equipment, as well as any completed work. The project took six weeks to complete and there were no floods; by the grace of God and Granny’s prayers the bridge was completed.

While the building work was going on, joy and sorrow intertwined, when a telegram arrived from London telling of the death of our sister, your Auntie Annie, at the young age of twenty-nine. Patrick went to London to the funeral; when he returned, he found conditions still suitable and the bridge got completed. The entire project cost roughly £30.”

How it Works Nowadays

Nowadays, there would be a whole plethora of engineers, architects and expert bridge builders, cranes and JCB’s, and a budget of hundred’s of thousands of euros needed to complete such a project.

Today this bridge stands on one of the access roads to the Great Western Greenway and as I watch countless pedestrians & cyclists make their way across it – in view of the old stepping stones just up stream – do they just take it for granted like I did, or do any of them dwell on how it came to be? Now older and wiser, I do feel proud of this bridge, which firstly served our family so well and now the general public. It stands as a monument to two gifted men and the most wonderful faith and prayers of an old woman, of whom I am privileged to be a descendant.

Patrick spent all of his later life living in Dublin, and his grandson Kevin McManamon now plays Gaelic football with Dublin.