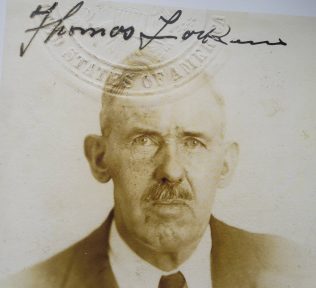 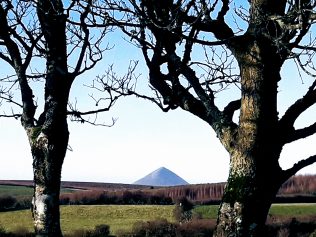 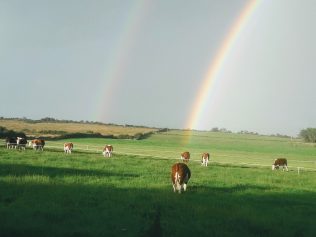 zoom
Hereford cattle graze contentedly on the ancestral homestead of Thomas Larkin, perhaps wishing to discover their 'pot-of-gold' beneath the rainbow.
Michael Larkin 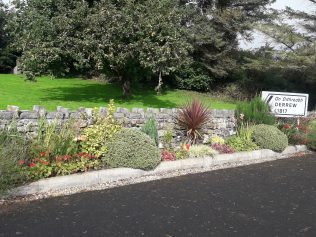 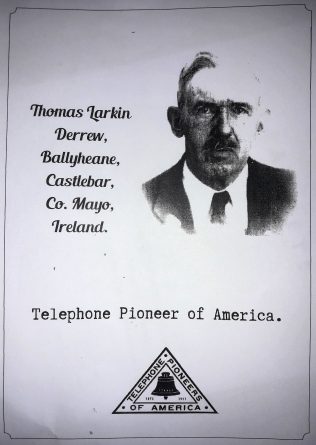 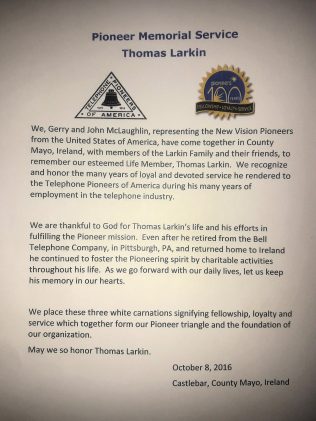 zoom
A President's message. Words spoken by the President of the Fort Pitt Telephone Pioneer Chapter, Pittsburgh at the headstone of Thomas Larkin in Killawalla cemetery.
Thomas Larkin archives/Michael Larkin 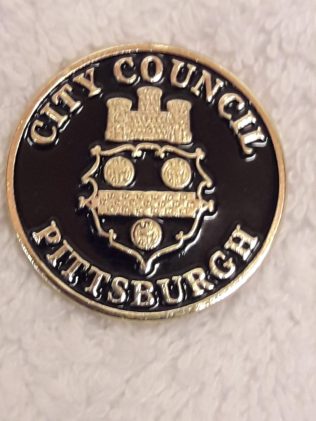 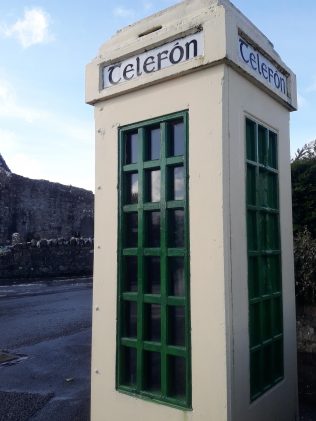 zoom
While the first transatlantic telephone call was made between New York and London in January 1927, it took many more years before the telephone network, operated by the Dept. of Posts & Telegraph became available throughout Ireland.
Michael Larkin 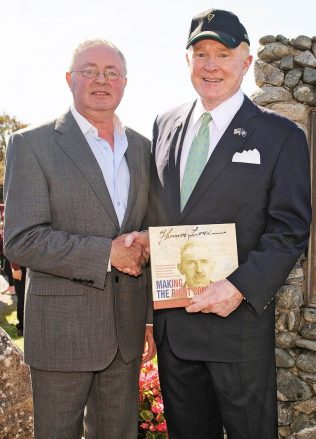 zoom
Mr. Edward Crawford, United States Ambassador to Ireland is presented with a copy of the book 'Making the Right Connections' by its author Michael Larkin.
Michael Larkin 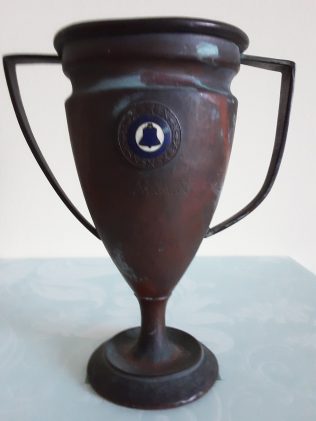 Following the invention of the telephone by Alexander G. Bell in Boston on March 10th 1876, one might assume that his new invention would immediately capture the attention of the American public. This was not the case however as many people felt that his new ‘speaking telegraph’ would never achieve commercial success. Even U.S. President at the time Rutherford B. Hayes reportedly stated “That’s an amazing invention Mr. Bell… but who would ever want to use it?”

Following the first coherent transmission of the sound of a human voice over wires by Bell to his assistant Thomas A. Watson in 1876, it would be almost 40 years later before the first transcontinental telephone call was made. On January 25th 1915 Bell called Thomas A. Watson from the American Telephone & Telegraph Co. headquarters in New York, or the ‘Telephone building’ as it was more commonly referred to . . . this time 3,400 miles (5,500 km) west in San Francisco. Costing $20 for a 3-minute call, (calls were cheaper at night), a transcontinental or other long-distance telephone call was beyond the reach of most individuals and small businesses.

In addition to the prohibitive cost of making a call, there was also resistance by parents who believed that ‘messenger boys’ would become unemployed if Bell’s new invention ever gained traction. While Bell, his assistant Thomas A. Watson, along with Gardiner G. Hubbard, Thomas Sanders, Theodore N. Vail and others deserve enormous credit for their persistence and investment in this new technology, great credit is also due to the thousands of early telephone pioneers and employees of all grades who ensured the successful roll-out of the network throughout north America.

The Bell telephone pioneers of America

In American folklore and history the term ‘Pioneer’ most frequently refers to the westward migration by thousands of settlers in convoys of wagons or on horseback, prospecting for gold, in search of employment, or simply to acquire more land. There were other Pioneers however, one such group being the Telephone Pioneers of America. Thomas Larkin was one of those early Telephone Pioneers of America.

Thomas Larkin was born in the townland of Derrew, close to the village of Ballyheane in Co. Mayo on July 4th 1874. His early years growing up was a microcosm of what life was like in rural Ireland at the time. The Great Famine (An Gorta Mòr, or the Great Hunger, 1845-1850) caused by the failure of the potato crop is etched in the memories of the Irish population, and even more so in the memories of the Irish who fled from the impoverished rural Ireland of the time.

A study carried out at NUI Maynooth’s Centre for Geocomputation found that between 1841 and 1851, Thomas Larkin’s native parish of Killawalla witnessed the single greatest decline in population within any one community in Ireland, with its population dropping from 2,277 people in 1841 to just 789 in 1851. Despite this decline in population, there were still far too many tenants trying to eke out a living on uneconomic, small parcels of poor quality land. It was against this background of evictions, landlordism, and a meaningless future at home that each member of the Larkin family, except Michael, the youngest were forced to emigrate to the ‘New World’ of America. Thomas Larkin’s emigrant journey was a little different to that of his older siblings in that he initially emigrated to Liverpool. The demand for labourers, factory employees and construction workers in Britain’s major cities and rapidly expanding towns at this time, along with the ‘comfort’ of an increasingly stronger Irish community meant that he and thousands of his fellow Irishmen and women would have the security of a weekly wage . . . unless other opportunities beckoned!

‘Great opportunities in the New World’

Large, persuasive posters and signs, with banner headlines such as ‘Great opportunities in the New World’ were to be found with increasing frequency on lampposts, shop windows and street corners. Encouraged by the colourful posters, coupled with reports that thousands of his fellow Irishmen and women were ‘doing very well for themselves’ in the USA and Canada, Thomas decided to ‘take a chance’ and board one of the many steamships departing regularly for the ‘New World’ of America.

Following his arrival in Philadelphia there were indeed ‘great opportunities’ available, but an insufficient amount of such opportunities relative to the amount of immigrants arriving daily. (He stated many years later; “If I had the fare to return to Liverpool at the time I would have done so”).

Posters and banners were also visible throughout Philadelphia, promising ‘Great opportunities’ further west in America. Undaunted, he journeyed westwards with his ‘American dream’ becoming a reality when he secured employment with the Bell Telephone Company of Pennsylvania, spending most of his distinguished career in the greater Pittsburgh region.

Some artefacts and memorabilia have survived

While much of the handed-down information relating to this man’s time as one of the early Telephone Pioneers of America has been lost in the mists of time, thankfully some artefacts and memorabilia items have survived, providing a tangible link to the early days of telephony and symbolising Irish connectivity through emigration with our diaspora throughout the world.

In the old Larkin homestead in Derrew, similar to most Irish homes from this era, on the mantlepiece over the fireplace small black and white photographs of family members, many long since deceased signified a link to times past. On the walls, a much larger picture of the Sacred Heart with its permanently-lit red lamp beneath, a picture of Pope John XXIII and a similar sized picture of President John F. Kennedy illustrates the strong Catholic faith and connectivity through emigration with the United States of America.

In the parlour, or ‘front room’ the framed picture of the Bell Telephone Company certificate conferring life membership of the Telephone Pioneers of America to Thomas Larkin at a prestigious ceremony in the AT&T Headquarters, New York was ‘extra special’. The engraved, once gleaming copper cup with its Bell Telephone Company of Pennsylvania insignia presented for loyal service, his American passport, the genuine cowhide leather briefcase, with its tanned leather interior having pockets for notepads, pencils and other telephone related stationery material — those artefacts coupled with the telling and re-telling of stories over and over again have kept the embers of this ‘connection’ alive.

On November 2nd 1911 in the Somerset Hotel, Boston, the Telephone Pioneers of America were founded as an organisation with Alexander G. Bell enrolled as member number one. The aim of this new organisation was not only to deliver an excellent telephone service, it also planned to ‘give something back’ to communities, neighbourhoods and society through a spirit of volunteering, life enrichment projects and educational initiatives. Today, the Telephone Pioneers, or ‘Pioneers’ as they are more frequently referred to are the largest, industry specific organisation in the world, with chapters throughout the entire continent of north America, maintaining the proud legacy of the original Telephone Pioneers from the past.

Acknowledging this proud legacy, in 2016 the President of the Fort Pitt Telephone Pioneer Chapter, Pittsburgh, travelled especially to Mayo, where, in a simple, yet very special ceremony, she placed a bell shaped wreath at the headstone of Thomas Larkin’s final resting place in Killawalla cemetery.

Following the completion of the latest transatlantic fibre optic cable, connecting the east coast of the USA with Ireland’s west coast, the Ireland-US council displayed some of Thomas Larkin’s memorabilia at one of their events, alongside a sample of the new, ultra modern fibre optic cable, depicting Irish American connectivity past and present.

The American Conference for Irish Studies (ACIS) also recognised the legacy of Thomas Larkin and the significance of this connection when its President, Professor Timothy McMahon together with Dr. Matthew O’Brien, Pittsburgh, Professor of History at Steubenville University visited the ancestral homestead and final resting place of Thomas Larkin.

“Believe me, the day will come when you will be able to ‘see’ the person who you are speaking to on the telephone”.

When Thomas Larkin uttered the above words, following his retirement from the Bell Telephone Company and return to a predominantly rural Ireland, they were greeted with suspicion and doubt. Today, thanks to the many advances in telecommunications and the evolution of the telephone, one can indeed ‘see’ the person who one is speaking to on the telephone . . . Just as Thomas Larkin had predicted.

The Ireland he returned to in 1930

While his yearning to return to the land of his birth was fulfilled following his retirement from the Bell Telephone Company, he seriously contemplated returning to Pennsylvania once again as the Ireland he returned to in 1930 was still decades behind the USA in terms of social and economic progress, infrastructure and communications. Apart from the telephone he frequently referred to the wireless, or the ‘talking box’ which was a common name for radio at the time, with Radio KDKA Pittsburgh being the world’s first commercial radio station, having gone ‘on air’ in November 1920. Similarly, when he referred to the street named Larkin’s Way on Pittsburgh’s Southside, his description of the vastness of the American farms, where ‘giant machines, capable of harvesting over 40 acres of grain per day, pulled by teams of up to 20 horses’ were in use on the American plains, people remained sceptical as to whether his utterances were factual or fictitious.

While Thomas Larkin was just one of several thousands of young Irishmen and women who made that perilous voyage across the Atlantic ocean to the ‘New World’ of America, his pioneering journey, legacy and memorabilia are today deemed to symbolise Ireland’s uniquely strong and special degree of connectivity with our diaspora.