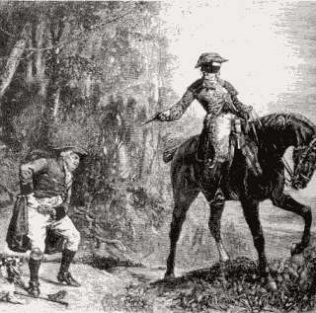 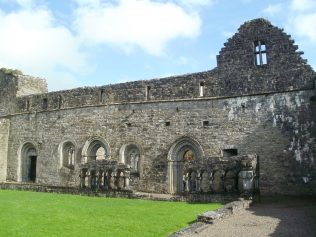 Accompanied by two companions and his favourite mount, Venus, George McNamara was involved in various activities in the surrounds of Cong, extracting goods from the rich and whom he considered greedy landlords and gifting the same to the poor of the neighbouring villages. Many stories are recorded about this gallant man with a social conscience and a wish to support victims of landlordism and suppression in the beginning of the 18th Century.

George McNamara was a Clare native, born in 1690. He was a roman catholic and at this time because of penal laws he could not become a landowner. He entreated his brother-in-law, Stephen Butler, who was a protestant to buy an estate in the grounds of Cong Abbey circa 1790.   The remains of his mansion there can still be seen in the grounds behind the Abbey, behind the Cloisters and on the pathway to the river.[i]

George McNamara was a strong, agile and handsome man. He was a superb sportsman. He was well known for his horsemanship skills and was also reputed to be an excellent marksman. He was enraged by the ill treatment of the peasant class and it is said that he settled in Cong with the intention of making life better for the poor of the village. He could see that there was no way in which the tenant farmer could improve his lifestyle or conditions for their families, if they made an improvement on their leased landhold this encouraged the landord to levy more taxes.  Eviction was the greatest fear of these tenants, and McNamara endeavoured to use his skills and local knowledge to “disown” some of the irresponsible and cruel landlords and make the poor tenants the benefactors. [ii]

McNamara was mostly known by the legendary stories that are written about him being a Robin Hood character. McNamara stole from the rich landlords and these goods were subsequently donated to the poor.  McNamara was a common sight riding on his beloved horse, Venus, and two other men who accompanied him on his adventures. Venus was a very swift but docile animal when he was around McNamara and his colleagues, however this horse was known to be vicious when encountering any enemy or pursuer. The horse had the ability to leap over ravines while fleeing while executing the looting activities. McNamara was extremely quick witted and avoided being arrested because of local support and his cunning nature.

Tradition tells us that McNamara’s kitchens were always stocked with foods, which he generously shared with his neighbours. He had a brewery, a fishery, and also ran a farm, so could supply various foods to those in need.

McNamara is buried in the grounds of Cong Abbey.