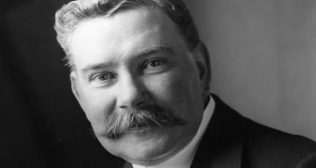 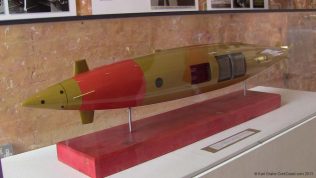 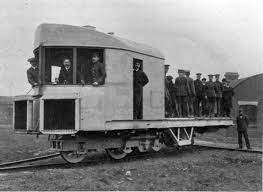 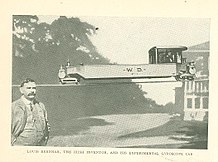 Meet Louis Brennan, inventor extraordinaire and one of the most remarkable people born in this county.  He was a proud son of Castlebar whose life and achievements went very much unheralded locally until very recent years.  He impressed giants of British politics from Gladstone to Churchill.

Louis Philip Brennan was born on Main Street in the town on 28th January 1852, the tenth child of Thomas and Bridget Brennan.  Their home was at the upper (Ellison Street ) end of Main Street, in a premises known locally as Armstrongs.  His father, Thomas, ran a hardware store in the town & also played a prominent role in the community, including as a member of the Board of Guardians (local government unit ) during 1847 the most onerous of positions, that of Poor Law Union warden, whose role was to decide who could be admitted to the local workhouse.  He was relieved of his role after a principled stand over people being refused admission for no particular reason.

From a young age Louis Brennan was involved in matters concerning how things worked. There were fears about the risks of an explosion if gas was brought to Castlebar. Thomas Brennan was a proponent of its benefits and a demonstration involving coal gas and a pipe by a very young Louis assuaged the fears of the worried locals.  He would later invent the torpedo, a prototype of a helicopter and the monorail.

However, aged nine years or so Louis Brennan would leave behind Castlebar: as the family emigrated to Melbourne, Australia.  The tragic deaths of five of Louis’s siblings at a young age may have been one of the reasons for their leaving, while an unsuccessful and expensive court case over a right of way with a neighbour may also have been a factor.  Louis Brennan started his working career in Australia as a watchmaker and was subsequently to work under Alexander Kennedy Smith, a renowned civil and mechanical engineer of the time.

The talent of the young Castlebar man was soon to become very apparent.  In 1874 aged just twenty – two, he invented the idea of a dirigible, or steerable, torpedo.  He spent some years working then fine – tuning his invention. He received a grant of £700 from the British government towards his work.  He patented the ‘Brennan Torpedo’  during 1877 & Brennan was invited to come to Britain to show plans for his torpedo.  This he did in 1880, after an initial award of £5,000 followed by an annual grant of £1,000 for five years from Gladstone’s government, the British purchased the exclusive rights in 1886 for a reputed £110,000, an enormous sum at the time.  The deal brooked considerable criticism but the commission which recommended the payment laid considerable stress on the importance of the Brennan ‘secret’ not falling into the hands of rivals.  The British saw the possibilities that the torpedo gave them in the defence of Harbours also channels.  There were other controllable torpedoes under consideration.  Grace’s Guide, a leading source of historical information on industry & manufacturing in Britain, explained why Brennan’s torpedo stood out. ‘Its peculiar feature lay in its method of propulsion.  Brennan made use of screws revolving in opposite directions, operated by hauling on two reels of wire, one of which was fixed to each propeller shaft. The wires were wound in by a vertical high-speed engine fixed on shore.  This engine was fitted with a double winding drum and differential; either drum could be braked, when the other speeded up.  By slowing down one propeller and accelerating the other, the direction of the torpedo was controlled.’  Brennan’s invention was, in effect, the first practical guided missile also a major evolution in weaponry in an era where diplomacy often took a back – seat to the waging of war.

During 1887 Brennan was appointed superintendent of the Brennan torpedo factory in Gillingham, Kent, he retired from that role in 1896.  He remained a consulting engineer there until 1907.

He did not stray far from his place of birth to find the love of his life as in September 1891 in Dublin he married Miss Anna Mary Quinn, from Ellison Street, Castlebar. (almost the girl next door, certainly when you consider how far from home Louis Brennan had been)  The Quinns’ were a well-known business family in the town.  The family ran a butcher shop on Ellison Street up to the middle of the last century, (on a site that remained a butcher shop run by Vincent Irwin until its closure in the early part of this century. )  The Quinn family were also one of the biggest landowners in the Castlebar area.  Louis with Anna Mary lived most of their married life in Gillingham, England, where they had a twelve – acre property called Woodlands.

While it was his torpedo that was Brennan’s most successful invention, he also achieved considerable fame for inventing the monorail.  Fans of The Simpsons won’t need an introduction to the single-track train.  Brennan invented the gyroscopic monorail, which used the gyroscopic action of a spinning wheel to overcome the instability of balancing a train on top of a single rail track.  It’s understood he first considered the need for such a rail system in Australia where the cost of a double track over vast distances was not feasible.  He had it setup in his garden,  you can imagine in Edwardian England the majesty of a model locomotive whizzing through the air, balanced upon a wire as if it were a tightrope wire then leaning into corners like a motorcyclist, without toppling over.  Sir Winston Churchill spoke fulsomely of the monorail locomotive, addressing Louis Brennan thus: ‘Sir, your invention promises to revolutionise the railway systems of the world.’  The then Prime Minister Herbert Asquith also Chancellor David Lloyd George were suitably impressed by the monorail when they witnessed a demonstration.  The success envisaged by Churchill & Brennan never materialized.  It largely came down to fears over safety, that the monorail might topple if the gyrostats failed.  Whilst Brennan may have convinced the people of Castlebar of the safety of gas, he could not do likewise with the monorail.

Still, one can but imagine the amazement of those present at the Royal Society in London in May 1907 were when Brennan put on a display of a gyroscope – controlled monorail car, which was arranged to run over the heads of the spectators in the room.  It traversed a span of suspended cable, it took 90-degree angles without difficulty.  At a time when rail was a much more in demand method of transport, this invention must have really captured the imagination.  Recall that in this period there was a much more extensive rail network in Mayo than today, with lines to Achill, Ballinrobe & Killala, the Western Rail Corridor bisecting the county plus plans also for a railway to Belmullet.  Here was a man from Mayo with an invention which could revolutionise rail transport.  There are some seventy – five monorails in existence today, with some in urban Asia also perhaps most famously, the monorails at Disney World & Disney Land in the USA.  But all too late for Louis Brennan, whose personal investment plus subsequent losses financially crippled him.

He worked during World War I in the munitions inventions Department of the Ministry of Munitions, while there he developed a prototype for a helicopter.  However, despite some progress, the project failed to literally get off the ground when funding was withdrawn by the British Government.

Louis Brennan was on holidays in Montreux, Switzerland when he was struck by a car on St Stephen’s Day in 1931.

His demise occurred from his injuries at the Clinique Florimont, Montreux on 17th January 1932 ( just 11 days shy of his 80th birthday)

He was buried in St. Mary’s Catholic Cemetery, Kensel Green in London.  His wife Anna Mary plus his daughter Norah & son Michael were interred with him.

He had thirty – eight items patented in London at the time of his death.  Not bad going for a man born in Mayo a few short years after the ravages of the Famine, while its effects were still extremely pronounced in his native Castlebar.

During March 2014, the Taoiseach of Ireland Enda Kenny unveiled a headstone at his grave.  A plaque commemorating his life & work was unveiled in the adjoining Oratory.  During 2014 a plaque was unveiled at his birthplace by Castlebar – man Mark Mellett who was the Vice – Commander of the Irish Armed Forces. That month also an exhibition of this Inventor’s life was held in Mayo County Library.

Alan King, a member of staff at Mayo County Library in Castlebar, has conducted extensive research into the Brennans’ time in the town.