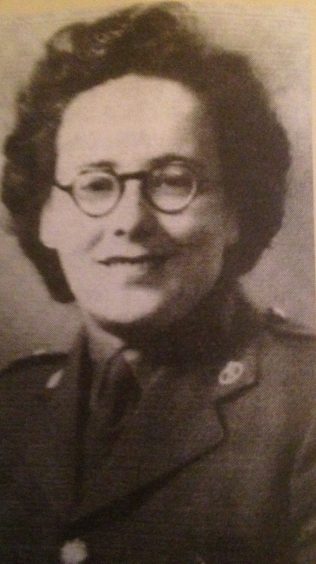 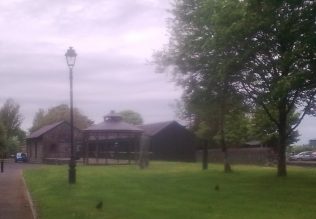 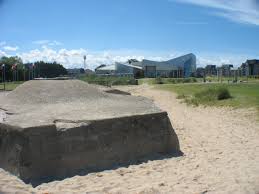 This heroic Nursing Sister was presented with an award as she saved several lives at sea though unable to swim.

Lily Mc Nicholas was born on 16th October 1909 in Kiltimagh, Co. Mayo.  She was one of ten children.  Her parents were Thomas & Bridget.  Her family owned a bakery that had been in the family since 1860. [i]

She attended the St. Louis School in Kiltimagh: Ireland’s Own 3rd May 2013

Lily Mc Nicholas emigrated during the 1930’s to study nursing in England.  From within her nursing role she was promoted to sister. [ii]

On 5th October 1942 Lily Mc Nicholas was granted a commission as a Sister (No. 246129) in the Queen Alexandra’s Imperial Military Nursing Service (QAIMNS) Reserve. [iv]

During 1947 she moved to Chicago for employment in a hospital.  Sister Lily Mc Nicholas later became a nurse attached to the International Harvester.[v]

Sister Lily Mc Nicholas was on board the ‘MV Amsterdam’ (an hospital ship returning to Great Britain from Juno Beach with military causalities) when the ship was torpedoed on the 7th August 1944 off the Normandy Coast.  Along with colleagues Sr. Mc Nicholas assisted the wounded to lifeboats.  She herself gave up a place in a water ambulance to escort her patients to the deck from her ward.  When she escaped the capsized ship she again rendered assistance (regardless of her own safety as she was unable to swim) thus she saved numerous wounded personal.  Among those lost included  her best friend (Molly Evershed) &  fifty-five patients, ten R.A.M.C. staff, thirty crew members also eleven P.O.W.’s.  When eventually Sister Lily Mc Nicholas along with other survivors were picked up by an American Cutter she continued to care for all the injured though she was ill herself. [vi]

‘The Amsterdam’ was on her third cross – channel voyage to pick up Allied casualties also German Prisoners of War from the Battle of the Falaise Pocket when disaster occurred on 7th August 1944.  Sister Lily McNicholas survived the sinking of the hospital carrier that was transporting casualties to Britain from Normandy in France.  Lily McNicholas was forced to jump from the ship as it capsized.  She ‘fell ill’ as unable to swim: she was assisted by the ship’s captain.  With the arrival of an American Cutter.  She was rescued then continued to provide medical aid to the injured men as they were pulled from the water.  The incident was widely reported in the Press after The London Gazette announced that Sister Lily McNicholas was to be awarded the M.B.E. for her heroic actions. [vii]

The life jacket Sister Lily McNicholas wore as a nurse on the ‘MV Amsterdam’ Hospital Ship torpedoed by enemy submarine off the coast of Normandy was donated by her family to Kiltimagh Museum. Sister McNicholas with her nursing colleagues ensured that all wounded were safely transferred to safety before they scrambled to safety themselves.  Most of the wounded Personal were stretcher cases who had to be assisted on to water ambulances. Sister  McNicholas was unable to swim: she experienced some difficulty before being picked up by a US Cutter.  For her bravery she received an MBE. [viii]

When she was recognized for her efforts Sister Mc Nicholas did not attend her Investiture at Buckingham Palace. Instead she travelled to see the parents of her friend in Scotland. [ix]

Her bravery was rewarded with the conferring of The Order of the British Empire by King George VI in 1944. This announcement appeared in The London Gazette; (it detailed the recipients including Sister Lily Mc. Nicholas) St. James’s Palace S.W.1.The KING has been graciously pleased to give orders for the following appointments to the Most Excellent Order of the British Empire, in recognition of gallant conduct in carrying out hazardous work in a very brave manner; – Sister Miss Lily Mc Nicholas (246129), Queen Alexandra’s Imperial Military Nursing Service Reserve (Kiltimagh, Eire)

On the 7th August, 1944, during the sinking by enemy action of Hospital Carrier “Amsterdam” off the coast of Normandy, Miss Mc Nicholas rendered important service whereby lives were saved which otherwise would have been lost. Well knowing that her place in emergency stations was in No.3 Water Ambulance as officer in charge, she continued to give encouragement and help in bringing patients from her wards on A deck up to the promenade deck. Her patients were admitted to the ship as stretcher cases, but in the grave emergency all, save the quite helpless were obliged to walk. In this distressing situation, Miss Mc Nicholas’ presence and her cheerful encouragement was of great value. She left the ship after it had capsized by scrambling down the starboard side which was almost horizontal by that time. Unable to swim, she had much difficulty and felt ill in the water, where she was helped by the Master of the ship & by an Officer of the Royal Army Medical Corps.

Shortly afterwards she was rescued by an American cutter. With complete disregard of her own comfort she immediately rendered aid to patients as they were rescued from the sea.

She has been remembered by relations as a feisty woman who spoke Hindi.  She would often quote Shakespeare: https://www.chicagotribune.com/

Sister Lily McNicholas  was featured in the Our Irish Women  temporary exhibition at the National Museum of Ireland-Country Life Turlough Mayo during October & November 2018.

Patrick Manning stated that the ‘MV Amsterdam’ sunk in eight minutes with the loss of one hundred & six souls at this link as he narrated his experience: https://www.bbc.co.uk/history/ww2peopleswar/stories/39/a4368639.shtml