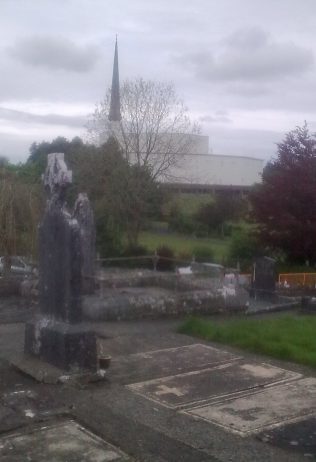 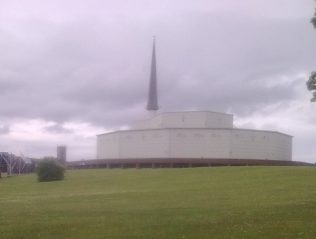 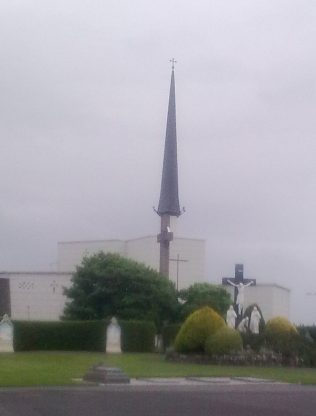 Judy Coyne promoted Knock Shrine in Co. Mayo.  She was honoured twice for her dedication by the Vatican.

Judy Coyne was born in Claremorris during 1905. She was the youngest of eleven children. Judy Coyne was married in 1924 to Justice Liam Coyne. They lived at Bridgemount, Belcarra, Castlebar. [i]

When Judy Coyne founded her voluntary society along with her husband, Liam, also a few other people, it would have astonished her to discover how the committed volunteers would become such an essential asset to Knock Shrine.  For over seventy years she worked tirelessly, she encouraged the development of facilities for all pilgrims also the ill.  Judy Coyne was instrumental in promoting Knock Shrine: with numerous publications, promotional literature, media broadcasts, tours, lectures.  She established various apostolates.  Dame Judy Coyne was vigorous in her task of running the St. Joseph’s Rest Home for pilgrims. [ii]

Judy Coyne was honoured twice by the Vatican: first the Pro-Ecclesia et Pontifice Medal, (the highest honour bestowed by the church on women) then secondly Dame of the Order of St. Sylvester Award in 1997 (she was the first Irishwoman to receive this award), this honour was conferred by the Archbishop of Tuam, Most Rev. Dr. Michael Neary. [iii]

Judy Coyne published the first Knock Shrine annual  during 1938.  She served as editor for fifty-five editions.

This Order was instituted by Gregory XVI in 1841.  St. Sylvester was Pope during the reign of emperor Constantine in the fourth century.  The order was specially created to reward lay men and women who are active in the apostolate, in particular in the exercise of their professional duties. The emblem of the order is an eight-pointed white enamel cross bearing the image of Pope St. Sylvester in the centre and surrounded by a papal tiara and the keys, hanging from a black silk ribbon with three narrow red stripes. The order has its own uniform. [iv]

Rules of the Knock Shrine Society

The Society would be a voluntary one, consisting of both women and men. The female members would be called handmaids (Gaelic-Cumhala) the male members would be called stewards (Gaelic-Giolla Mhuire) All Handmaids would wear a white uniform but the stewards would wear a distinctive sash when on duty at the shrine. The society would have a “promoters” section, membership open to the public world–wide. The conditions of this “membership” would be a spiritual one with strict emphasis on discipline in a code of conduct & would require two days of recollection annually.

Dame Judy Coyne’s legacy has been the five hundred or more handmaids & stewards that volunteer during the summer Pilgrimage season.

A memorial was erected in Dame Judy Coyne’s honour by Monsignor Joseph Quinn parish priest who said it was fitting the plaque was unveiled as 150,0000 Pilgrims had attended Knock Shrine for the one 130th Anniversary of the Apparition, also that ‘she was deeply in the course and development of Knock Shrine for more that seventy years.’   She stated ‘I would like to make it known that I am accepting this honour not alone on my own behalf, but on behalf of and in the name of all the Knock Shrine Society promoters and all the handmaids and stewards past and present.’

In The Connaught Telegraph  of 19th May 2020 Johnny Mee in Auld Stock referenced the devestational fire that occurred at a previous home  ‘Bridgemount House‘ where Dame Judy Coyne also her husband Judge W. P. Coyne lived for several years in Belcarra.   He stated that ‘Dame Judy did enormous work over many years furthering the cause of Knock Shrine.’  She was a regular visitor to the newspaper office as she required printing material for the shrine.  He reported that ‘Dame Judy was the epitome of Christianity, humble, kind, a women of many virtues.’