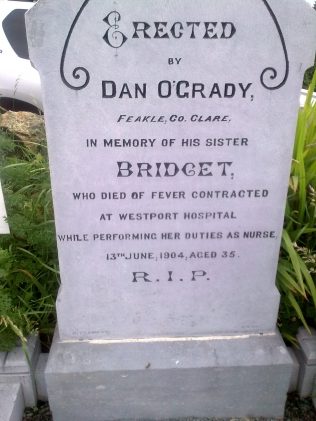 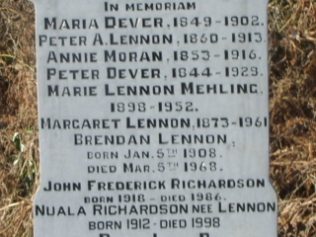 zoom
Grave of Peter Lennon, Master of the Workhouse and his Family in Aughavale Cemetery, Westprt.
Author, personal photograph

In the Mayo News June 18th 1904 the report of the Guardians of the Westport Union Meeting was printed. Some items discussed were The Marine Works, the Graveyards at Aughagower and Kilgeever, and local tenders for roadworks in the area. However, the main item discussed was the report of the recent passing of Bridget O Grady, the Nurse at the Fever Hospital in Westport.

Bridget O Grady was a native of Clare, but she had settled in Westport where she took charge of the local Fever Hospital, originally the Westport Workhouse. Bridget was a trained nurse. At that time there was an outbreak of typhus, a well feared contagious disease. Bridget cared for a large number of her patients who had succumbed to typhus during the out-break of this disease in the hospital. It was reported that she gave these patients great care and attention.

Ironically because of her kindness many patients did recover, and it was following this that Bridget herself succumbed to the disease. She fell ill and the parish priest came to the Fever Hospital to give her the last  rites, Bridget was only 35 when she passed away.

As Bridget was not from a local family she was laid to rest with a Nurse who had passed away from the same disease some time before, in Aughavale Cemetery. The chief mourners were Dan O Grady and James O Grady, her brothers, Dr. Birmingham who was the Chief Medical Officer, Peter J Lennon the Master of the Hospital, F. J. Gallagher, Clerk of the Union and his assistant clerk, three of her nursing colleagues and some other local sympathisers. Many flowers were sent most notably a wreath from the Superintendent Nurse in Dr. Steevens Hospital.

Report at the Guardians of the Westport Union Meeting

The Master of the Fever Hospital, Peter J Lennon delivered the sad news of Bridgets untimely death to the Chairman and Officers of the Westport Union. He said that she had been employed in the hospital since the outbreak of the Typhus, “contacted the fever and died on the 13th inst. I had suitable arrangements made and her remains were conveyed by hearse to Aughavale Cemetery where she was interred on the 14th.“ [i] Mr. Lennon also read out a letter of sympathy he had received from the Matron of Dr. Steevens Hospital, where she expressed her thanks to the staff for the care they gave to Ms O Grady.