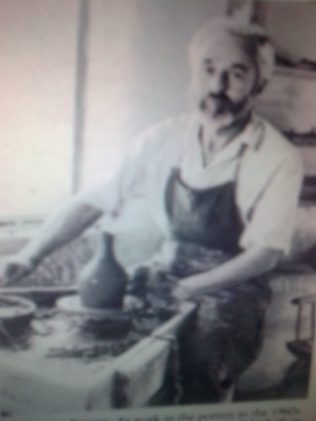 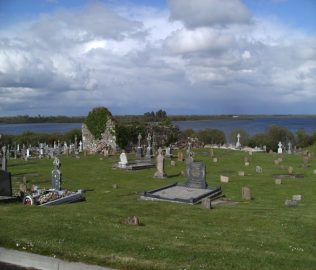 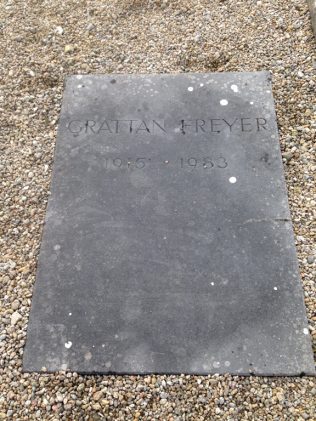 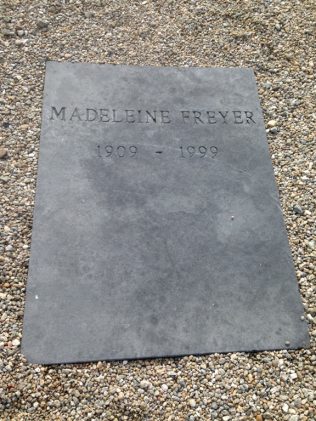 Grattan Freyer was great-great-grandson of Samuel Freyer from Cleggan Co. Galway. Samuel’s eldest son Sir Peter Freyer (1851-1921 an M.D. M.A. Mch. C.B.E) was named after his grandfather Peter Johnson, a chief officer in the Irish Coastguard Service, his mother was Celia Burke.  He also had a great-uncle who had been a successful jockey.  The Freyer family were of Huguenot descent.  Grattan was the second son of the writer & art collector Major Dermott Freyer (1883-1970)  & Lorna Doone McLean, New Zealand (1898-1919)  Grattan Freyer was born on 25th July 1915 in England where he was raised.  He had two brothers Michael & Patrick.

He was a lifelong daily swimmer, a good step-dancer.  He also bred horses.  In later years he rode throughout the hills of Pontoon in west  Ireland.

Grattan Freyer had studied natural sciences & English at Cambridge Tripos during 1936.  He discussed in his thesis on the development of Irish drama.  While he researched Machiavelli for his PhD at Trinity College, Dublin he spent time in Florence with his friend / wife Madeleine also with his artistic & literary friends in Dublin.  His PhD thesis was called ‘the Fortunes of Machiavelli’  which was later turned into a book entitled Aspects of Machiavelli; An Enquiry into the Role of Machiavelli in the Intellectual Life of the West. (never published) He graduated from Trinity College during 1940.

Grattan Freyer married Madeleine Giraudeau (whom he had met in 1935) in Dublin on 16th August 1939: then married again in Ballina, Co. Mayo on 10th July 1958 when he converted to Catholicism.  Madeleine was born at La Boissière du Dore (Loire Atlantique) on 22nd August 1909 to Breton parents, father a doctor & pharmacist, Emile Giraudeau (died 1927) also mother Gabrielle Creston (1884-1954)   She grew up in St. Nazaire also St. Amend-en-Puisaye.  She studied nursing at the French Red Cross Nursing School, with a qualification received in 1934.  Her professor at the Paris Hospital ‘La Charite ’ described her as ‘the best nurse  – gentle, wise, intelligent, devoted.’

Both Gratten & Madeleine had travelled extensively throughout France, Poland also Russia while Madeleine had been to Turkey &  Norway to name a few destinations.  Madeleine had the use of a small flat in Paris where they stayed as they both went on foreign holidays throughout their time in Ireland.  Later in life Grattan Freyer travelled to Europe also America for his academic lectures.

Grattan Freyer became an academic on returning to England from their European travels. While working for the ‘People’s Education Association’  in adult education he befriended the great English studio potter Bernard Leach.  When Grattan Freyer conceived the idea of a pottery business Leach encouraged him as he envisioned that Ireland was ‘geologically a potters paradise’:  he advised Grattan Freyer to operate ‘a small factory humanized and with discretion and total control of form, material and décor.’  Between 1946 & 1947 Grattan Freyer entered an apprenticeship at the Leach Pottery at St. Ives.  Madeleine became the salesperson also Leach’s private secretary.  She also learnt to throw & decorate whilst at Leech Pottery.  Grattan Freyer made a tour of sixteen English potteries also seven museums during his apprenticeship.  By 1948 Grattan Freyer was experienced enough to manage the Wenford Bridge Pottery in Cornwall for a year.  He researched the use of turf as a fuel for firing kilns.  Grattan Freyer tested the clay deposits at Wenford Bridge from both Youghal in Co. Cork & Co. Mayo.   He also studied Fairlie’s Notes on Pottery Clays.

Grattan Freyer made the decision to opt for Mayo then Terrybaun because he would have the desired distinctive clay deposits required that were available within the area.  Consideration also of the Mayo area was given to the fact that his father Dermott had returned to live in Achill: where Dermott Frayer maintained an eccentric establishment at his home called Corrymore House, at the back of which he built a Greek theatre to hold folk-dancing displays. The cottage at Pontoon with land & bog (approximately twelve acres, just north of Pontoon on the west side of Lough Conn) was purchased by the Freyer’s in 1948.  Madeleine & Grattan then began the task of renovation with the plantation of trees. They added a drive with courtyard also planted a vegetable garden.  Both of them became expert bricklayers in the process!  During their preparation of the pottery they were visited by Muriel Gahan of The Country Shop in Dublin who actually became one of their first customers.  The clay was purchased from the Clarke Family who lived at Ardagh near Ballina.  Grattan Freyer produced the first pots of Terryduff  clay on 4th July 1950: which he worked on a kick wheel that he had built.  He used turf for his kilns until 1958 when he installed an electric kiln.  It became a custom of the Freyer’s to hold an annual pre-Christmas exhibition at the Painter’s Gallery in St. Stephen’s Green with an occasional one at The Country Shop in Dublin.  Price list from 1956 offered fifty-three different items for ‘Table & Kitchen Ware’  also the availability of ‘Presentation Wares’  to order with prices in the range of 1/6 for an egg cup up to 63/ for a large fruit bowl.  The list included terracotta ware & traditional slipware.

Grattan and Madeleine became skilful at the ‘Marbling’  effect.  She won an award at an exhibition in Munich.  Madeleine concentrated on marine also equine animals.  She produced ashtrays for hotels & restaurants with customized Celtic patterns plus a variety of items for tourists.  It was Grattan’s department when lettering was required i.e. wine beakers decorated with mottos or commemorative plates or tea-sets.

Through the years several visitors called to the Terrybaun Pottery while some decorated pieces of pottery.  During the 1950’s painter Turloe Connolly spent a day decorating tiles & vases while archaeologist Liam de Paor produced a location map for the pottery.  Françoise Henry the art historian drew Celtic patters on pottery pieces.  During 1959Japanese professor Kuni Imaeld decorated plates with Japanese texts.  In 1964 when Pauline Bewick stayed with the Freyer’s,  she decorated numerous plates.  Bernard Forester of Dartington Pottery also Alec Sharpe, (a fellow Leach apprentice) visited Terrybaun: they both decorated various pottery pieces.  During 1974 another Japanese artist Tacao Ono drew birds also figures on Terrybaun Pottery.  The arrival to the area of the Irish sculptor Oisin Kelly led to much collaboration that lasted for six to seven years.  A local friend Desmond Mac Avock of Ballina made slip pictures on woodcuts based on Henri Laurens designs.

During the 1960’s Grattan Freyer returned to academic work in the field of Anglo-Irish literature. His publications included 1973  Ireland’s Contribution in the Pelican Guide to English Literature vol 7,  1973  Peader O’Donnell)  He republished O’Donnell’s novel The Knife.  He published during the summer of 1973  A Readers Report on  Dubliners  in The James Joyce Quarterly  vol. 10 no 4 (pages 445-457)  Also he produced in 1981 Yeats and the Anti-Democratic Tradition  during 1982,  Mondale and other French in Sagalrieb  followed that year by Bishop Stock’s Narrative of the Year of the French.   Modern Irish Writings: a prose and verse anthology  was edited by Freyer during 1979. Integrating Tradition: the achievement of Sean O’ Riada also edited by Freyer in 1981.  During 1984 Grattan Freyer collaborated with Dr. Sheila Mulloy on The Unfortunate John Moore  for the Cathair na Mart Historical Journal  volume 4.  At the time of his death he had been working with Dr. Sheila Mulloy on Eyewitness.   Grattan Freyer established the Irish Humanities Centre also administered study courses for foreign students.

Terrybaun Pottery was noticed by a Swedish report Designs in Ireland’ in 1961.

Telefis Eireann made a short documentary (3 minutes &  54 seconds) about the pottery that was broadcast on 30th January 1963.

Grattan Freyer was referenced in Design and Material Collection   (page 130)

An obituary entitled Grattan Freyer dies  appeared in The Irish Times during 1983, it also referenced his publications with his frequent contributions to the newspapers.

Grattan Freyer’s book collection is held in N.U.I.G. Library.   It contains books by & about the author Liam O’Flaherty.

Later Madeleine sold the pottery business to her nephew, Henri.  She returned to live in Dublin.  Henri manages the business since that time.

Madeleine’ demise occurred on 6th August 1999.  She is buried with her husband in Addergoole Cemetery in Co. Mayo.

Pottery Methods; ‘Marbling’ also other forms used were ‘Slip Trailing’ (in which a line of slip is used to create a drawing) also ‘Scraffit’  (where lines are scratched through a coating of a slip to reveal the underlying red-clay body)

Pottery Marks; The pottery used at least eight marks, all stamped, impressed or inscribed.  Five of them included a triskel device with different combinations of word; Terrybaun, Ireland or Irish Handmade.  Of the others the initials would have been ‘G. F.’…. the last was simply handwritten as ‘Terrybaun.’

Gratitude is extended to Henri Hedou also his family for his assistance also time.