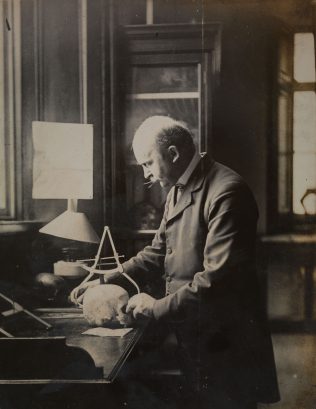 How did one explain the presence of a primitive race living in the back yard of the United Kingdom at the height of the British Empire? Scientists based in Trinity College Dublin attempted to do just that by surveying the ‘primitives’ and their communities. The results were read into the records of the Royal Irish Academy and published as a series of ethnographies, creating an unprecedented record of life on the western seaboard in the 1890s.

Charles R. Browne was principally responsible for the field work involved. Starting in Aran in 1891, he moved along the west coast and finished up in Carna in 1900. He visited Dun Chaoin in 1897 and completed a photographic survey but never published an ethnography and no written records have been found to date.

“The Irish Headhunter, the photograph albums of Charles R. Browne” is probably the most important photographic archive to come into the public domain for some time. The anthropological enquiry – the headhunting that motivated it is one of the best kept secrets in Ireland.

This lecture is supported by Kerry Education Service.

The photographs of Charles R. Browne are shown with the permission of the Board of Trinity College Dublin.

The Headhunter project is supported by the OPW (Office of Public Works) and The Heritage Council.